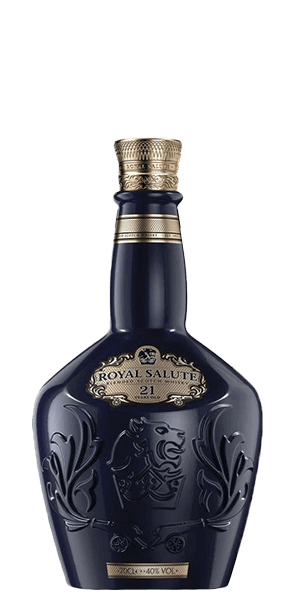 Chivas Regal is born in the Strathisla Distillery—the oldest continuously operating distillery in Scotland—founded in 1786. The Chivas Brothers—purveyors of gourmet foods and Liqueurs since 1801—received a royal warrant to supply fine Scotch Whisky to Queen Victoria at Balmoral Castle in 1843. Thus the “Regal” in the name. No pressure, right?

Recognizing that they would need a consistent supply of very high-quality malt Whisky, they decided to take charge and blend it themselves, and Strathisla was their source. Today, Chivas Regal is one the most popular Scotch Whisky brands in the world and produce a range of Whiskies for a world-wide audience.

As good as Chivas Regal is, Chivas Regal Royal Salute 21YO is even more so. You see, the current Queen Elizabeth was coronated in 1953 with a royal diadem festooned with rubies, sapphires, and emeralds. Upon her coronation, she was greeted with a 21-gun salute, as is the tradition. As official suppliers of Scotch Whisky, Chivas inaugurated an honorary release of their signature Whisky, appropriately named “Royal Salute.”

Given all that back-story, the details all begin to make sense. The minimum age of the Whiskies that comprise this malt blend is 21 year old and it is presented in a shorter, squat porcelain bottle—called a flagon—by the famous British ceramics house of Wade. It comes in three glazed colors: sapphire blue, ruby red, and emerald green. It arrives in a matching velvet pouch with the royal crest proudly stitched upon it.

If you are looking for a perfectly wonderful gift that speaks of prestige and can add a smile to the face of the sternest Ebenezer Scrooge this just might be it.

The Flavor Spiral™ shows the most common flavors that you'll taste in Chivas Regal Royal Salute 21 Year Old and gives you a chance to have a taste of it before actually tasting it.

guest, Dec 18, 2020
Smoky; some caramel & dried fruits. Hot on the palate & finish; should be easier drinking given the lower abv. Not very complex. I got this on sale but rating would be 5 if I paid the average price.

Earl, Nov 6, 2020
A Scotch worthy every penny. I never understood Whisky until I had this.

Thomas, Feb 27, 2019
After a 6 month tour of the Mediterranean back in 1980 we stopped in Rota,Spain for deSnailing of all equipment,finding a special happening at the base PX found a lovely case of Chivas Regal Royal Saulte 21yo what a delicious delight this find was . Purchased 2 cases of this fine specimen for gifts when I returned home !! Absolutely thee best Tasting smooth Going down Treat !!

Mike, Jan 14, 2019
Delicious, but the cork broke in half, leaving cork crumbles in this expensive bottle. A google search shows this is common with this Scotch. Seems like something the cheap whiskys can get right should be simple.

Mariano, Nov 11, 2017
What a blend! A must in any bar. Hey JW Blue Label. Say hello to my little friend!
Load more reviews