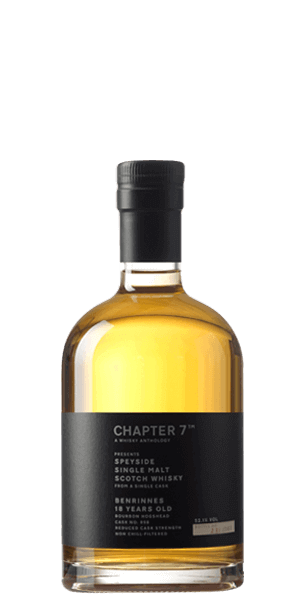 Chapter 7 Benrinnes 18 Year Old is a rare and special opportunity.

The premiss of Chapter 7 is simple — each cask of Whisky is unique. The wood, age, temperature, location in the rick-house… everything tells its own story. Even large single-malts marry casks in large vats before bottling so that the Master Blander can try to make them all taste the same. The folks at Chapter 7 Whisky think that’s a shame. Chapter 7 is the brain-child of Selim Evin. He thinks that each cask should tell its own unique tale, so he travels to Scotland and Ireland to hand-select single casks from the inventories of the world’s greatest distilleries. Then he custom bottles each one with its own story. How many bottles you ask? Well, until the barrel is empty.

The Benrinnes Distillery has been making fine, Highland Whisky under various names at their site in Arberlour since 1826. There has been a 15 YO, semi-official single malt bottling under the Flora and Fauna label, but aside from that, all production has been in hot demand by some of the finest blends in Scotland. But the good folks at Chapter 7 got their hands on a single cask of Benrinnes Single Malt that had been aging for eighteen years in an ex-Bourbon hogshead. It is bottles at 52.1% ABV and it has been reported that only 267 bottles were produced. If you want one of these rare gems, do not wait.

The Flavor Spiral™ shows the most common flavors that you'll taste in Chapter 7 Benrinnes 18 Year Old and gives you a chance to have a taste of it before actually tasting it.

Simon, May 28, 2017
Very, very good. Good smokiness and with an aftertaste that lingers.