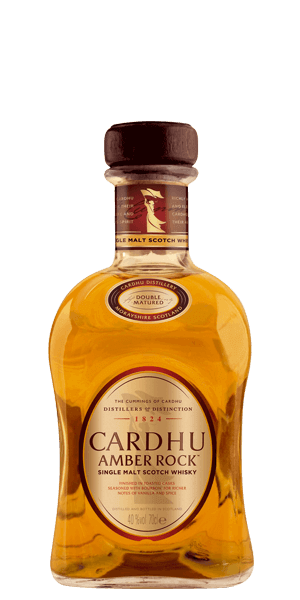 In 1874 Helen handed the distillery to another strong woman, Elizabeth, the wife of her son. Elizabeth, known as The Queen of the Whisky Trade, rebuilt the distillery and doubled capacity. She made Cardhu one of the malt Whisky leaders.


You may know Cardhu as the signature base-malt of Johnny Walker, but it was a single malt long before the blenders got the hands on it. Happily, Diageo has restored it to its former glory. For their latest expression of the Cardhu range, they have married vintages of the main-line single-malt and then re-matured them … allowing the flavour profiles to integrate in the barrel.

What emerges is an aromatic, wood-forward dram with plenty of spice and character. And all of that spice and wood is a great balance for your next Whiskey-based cocktail—try it in a Manhattan and you will see what we mean.

SmartAss Corner
In Gaelic, Cardhu means “black rock.” They call this new offering—released for the first time last year—Amber Rock to recognize the color of the dram and its relationship to the traditional Cardhu name.

The Flavor Spiral™ shows the most common flavors that you'll taste in Cardhu Amber Rock and gives you a chance to have a taste of it before actually tasting it.

Nose / Aroma / Smell
Sweet, light fruit—pears and apples, and a bit of oak