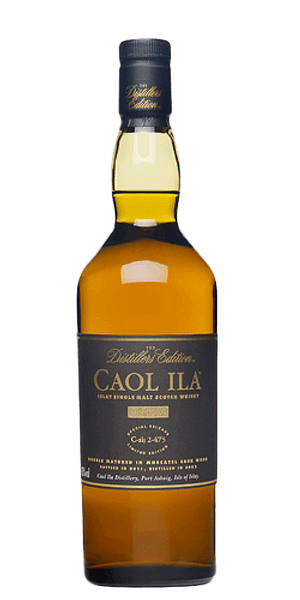 The first thing you’ve got to know is how to pronounce "Caol Ila." In Gaelic you say "cole i-la" and it means "sound" of Islay — as in Puget Sound. And sure enough, this distillery sits right on the water facing the strait between Islay and Jura… smack dab in smoky-single-malt paradise. This is a production machine, cranking out 3.5 million liters of the peaty amber liquid each year. Why? Because people just can’t seem to get enough of the stuff, that’s why!

We told you that this stuff is popular, and sho’nuff, not only is there a huge demand for their single-malt offerings, but Caol Ila is a core component of some of the worlds biggest blends. Johnnie Walker and the famous Black Bottle Whisky would not be what they are today were it not for the floral, savory nectar flowing from the stills there on the shores of the Jura Strait since 1846. Go get ‘em lads!

Caol Ila Distillers Edition is the classic 12-year Caol Ila misty-island goddess Whisky finished in Muscatel casks. We laymen like to toss around words like "Sherry" as if it had only one meaning. But if you are from Portugal or southern Spain, you take Sherry VERY seriously. And these professionals know that Muscatel casks are simply a better fit to compliment the unique character of Caol Ila Whisky.


Smartass Corner:
Muscatel is a kind of fortified wine — similar to a Sherry — that is made exclusively of Muscat grapes. Where some Sherries taste like dried cherries or raisins, these have more floral and citrus notes.

The Flavor Spiral™ shows the most common flavors that you'll taste in Caol Ila Distillers Edition and gives you a chance to have a taste of it before actually tasting it.

Flavor / Taste / Palate
The sweet and malty palate brings a wave of peaty smoke and crisp flavors of cinnamon and spices.

Aaron, Oct 7, 2020
Wonderful nose on this - non-overpowering peat, dark chocolate, spiced honey, and interesting white wine and Oreo notes. Taste was very solid but didn't quite live up to the complexity of the aroma. A little more peat, charcoal, dark chocolate again, a little sweetness midway through, and then a very iodine/medicinal heavy finish that didn't quite do it for me. A very solid, enjoyable dram indeed...but fell just short of great.