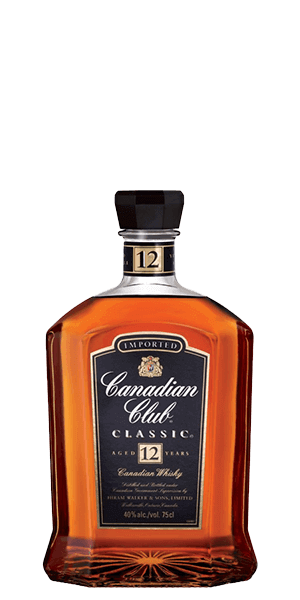 A lovechild of Scotch and Bourbon.

The first thing you need to know about Canadian Club is that it wasn’t even invented in Canada. Sure, it’s made there now, and that is an interesting story indeed. You see, the Whisky that would come to be known as Canadian Club was invented by a small distilling company called Gooderham and Worts from Detroit, all the way back in 1858. Hiram Walker was living nearby, making cider Whisky in the back of his grocery store and saw the potential, so the two companies merged with Walker as “the Man.”

When the dark times of Prohibition arrived, Walker picked up the entire operation and moved it across the lake, conveniently just across the Canadian border and changed the product’s name to what it is now. He even built an entire town called Walkerville, so that his employees could live near the new plant. If you are new to Canadian Club Whisky, think of it as a delicious love child between Scotch and Bourbon. Like Bourbon, it is a mix of grains with a high corn mash. Like Scotch, it adds a lot of barley. But what makes it a bit different is that they also use malted and unmalted Rye. This makes Canadian Club a bit fuller and more grain forward than Bourbon.

Canadian Club Classic 12 is… well, it’s their classic Whisky produced in smaller batches and aged for, you guessed it, 12 years. See? Whisky doesn’t HAVE to be complicated. Sometimes the simplest things are best.

The Flavor Spiral™ shows the most common flavors that you'll taste in Canadian Club Classic 12 Year Old and gives you a chance to have a taste of it before actually tasting it.

Nose / Aroma / Smell
Creamy oatmeal with the sweetness of molasses

Finish
Long, lightly dry, with a hint of butterscotch on the tip

Hunter, Dec 29, 2020
Nose is honey, malt, and an almost spiced peach. In the palate itis revealed that this spice is a bit of rye that adds a nice note to the honeied pear. Just wish it was richer and had anything resembling a finish.

Earl, Sep 4, 2020
THIS ONE OF THE BEST CANADIAN WHISKEYS OUT THERE.

Effie, Oct 7, 2019
Better than the basic and best drank by itself

Vicky, Sep 11, 2018
Smokier than I would expect from a Canadian, yet very smooth and rich