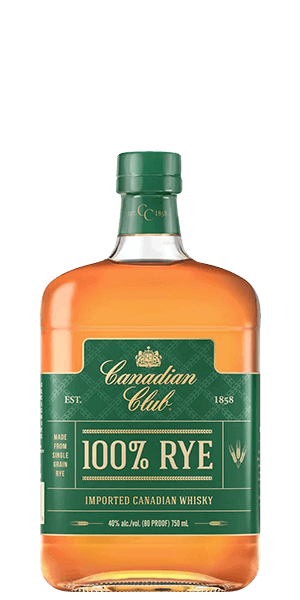 A 100% true blue Rye thats all rye, no strings attached, all ryetteee.

Beloved from wise guys to regals, Canadian Club Whisky is probably one of the most iconic Spirits of the Prohibition era. In 1858, Hiram Walker opened his Whisky distillery in Detroit. Learning how to distill cider vinegar in his grocery store in the 1830s, he produced his first Whisky barrels in 1854. In 1891 Canadian Club became the first North American Spirit to receive a Royal decree, from Queen Victoria. When Prohibition hit, Walker high-tailed out of the “dry" state of Michigan, strategically transplanting his distillery across the Detroit River in Windsor, Ontario.

Prohibition was to Canada’s benefit ya see, Canadians were free to manufacture and export liquor to Americans just across the border. It was during this time that Hiram’s Canadian Club became a haven of clandestine activities…at the pinnacle of America’s Prohibition. Canadian Club, more popularly known as “CC,” was a sensation, said to have been treasured and smuggled by infamous mobsters like Al Capone himself.

Hiram was also the first to age his Spirit in oak barrels for a minimum of five years, at a time when all of the US Bourbons and Whiskies were aged for less than a year. Canadian Club has roared on to a great path of success. Their Canadian Club 100% Rye won 2014 Canadian Whisky of the year. With its pure rye mash bill, this Canadian Club release has notes of caramel oak and a has a distinct spicy finish. Unlike most Whiskies in its class it is a true rye from start to finish, rich both in flavour and history.

The Flavor Spiral™ shows the most common flavors that you'll taste in Canadian Club 100% Rye and gives you a chance to have a taste of it before actually tasting it.

Burton, Feb 27, 2020
This is a nice whiskey for those who prefer a lighter, smoother drink. A thinner viscosity, but flavorful. Worth a try.

Aaron, Jan 17, 2020
A very tasty rye, but in my opinion this would benefit from being a 90 or even 100 proofer. At 80 proof it's just too smooth, I suppose this is good for those new to whiskey or rye, but it has no power for mixes. I would love to see a 50% ABV version, since the flavor is really good.

Michael, Mar 6, 2019
Good for mixed drinks; first rye I’ve had and not fully sold, however a decent price

Aaron, May 20, 2017
Smooth and easy drinking. But the flavor easily gets lost in mixed drinks, where a rye should shine.