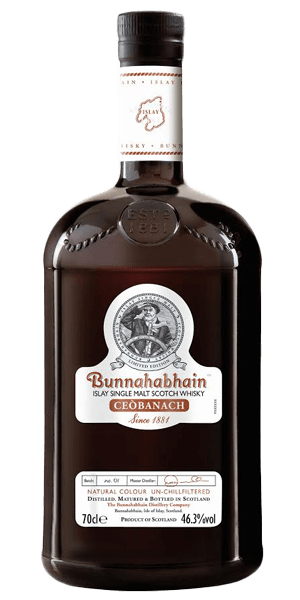 Bunnahabhain distillery was constructed in 1881 by the Greenlees brothers, and first opened its doors in 1883. It's located on the island of Islay, with 11 employees and four massive stills – among the biggest in the industry, alongside Glenmorangie.

The Story of the Cèobanach (pronounced ' kyaw-bin-ach, meaning smoky mist in Scots Gaelic) began with master distiller Ian MacMillan’s dream to craft a single malt that would reflect the origins of Bunnahabhain, both the place and the single malt’s charming character. He used the best, hand-selected, ex-Bourbon barrels to mature the Cèobanach. The end results is an intensely peated and and complex single malt. Limited release Worldwide.

The Flavor Spiral™ shows the most common flavors that you'll taste in Bunnahabhain Ceobanach and gives you a chance to have a taste of it before actually tasting it.

Robert, Jan 20, 2019
Very nice. Salty, not as iodine as laphroaig and a nice soft finish

Kevin, Sep 4, 2018
Nose- heavy peat takes center stage. It’s hard to pick out anything else over the peat. It does have a very sweet smell surrounding the peat. Mouth- The peat is much more mellow compared to the smell and isn’t over powering if you enjoy the Islay region. It’s very smoky and on the tongue a little pepper. Finish-dry and short. The smoky/woody flavors carry all the way through. Honestly it’s a pretty straight forward whisky. For me even after layering during a sip it rests on my tongue but I don’t get much from it. It seems to have a delay from where I get that sip and the flavors start to come through. It could very well be me though. My cabinet only has so much room and although it’s not bad it hasn’t earned one of the limited spots.