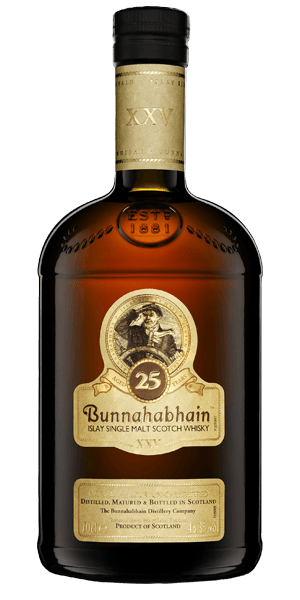 Bunnahabhain distillery was constructed in 1881 by the Greenlees brothers, and first opened its doors in 1883. It's located on the island of Islay, with 11 employees and four massive stills – among the biggest in the industry, alongside Glenmorangie.

Bunnahabhain 25 Year Old has been re-introduced as an unchill-filtered Scotch, with natural colouring and a different design, and slightly more Sherried as the previous expression. The 25 year old ended up winning top prizes in various competitions throughout 2013 and 2014. We love the design, but we love what's inside even more. Connoisseur's choice for sure!

The Flavor Spiral™ shows the most common flavors that you'll taste in Bunnahabhain 25 Year Old and gives you a chance to have a taste of it before actually tasting it.

Finish
Lingering for long after the final sip.

Henry, May 28, 2019
An amazing scotch I wish I could afford to drink more frequently.