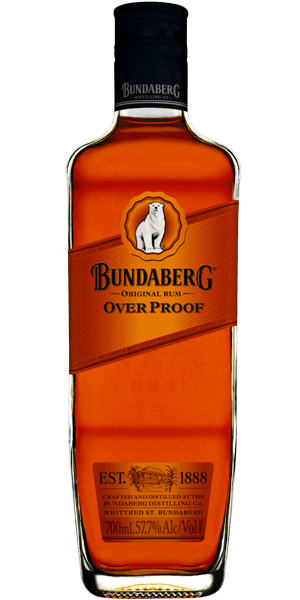 Rum with a punch. But not Rum-punch!

Dating back to 1888, Bundaberg, or Bundy as it is affectionately referred to in Australia, sports an iconic square bottle adorned with white polar bear that has tenuous links back to Rum’s mystical powers of warding off colds. Interesting fact - when Australia joined Allied Forces in World War Two all Bundy supplies were requisitioned by the Australian government for the Royal Navy and US Military.

Bundaberg Overproof is a well-regarded and much loved Rum that, with its high ABV of 57.70%, packs a hefty punch. Named Overproof after the old method of testing for a spirit’s strength (long story short, if it is over 50% it is overproof, if under it is underproof).

The Flavor Spiral™ shows the most common flavors that you'll taste in Bundaberg Overproof and gives you a chance to have a taste of it before actually tasting it.

Flavour / Taste / Palate
A lovely spice with a hint of fire, toffee

Joshua, Apr 22, 2020
Not much to say about the flavor - I mean, there's not a lot of flavor left after the massive alcohol burn. But it is surprisingly smooth for as strong as it is. Not what I would call a daily drinker, or even a sipper, but interesting. Makes a dangerously good rum cake or rum balls!