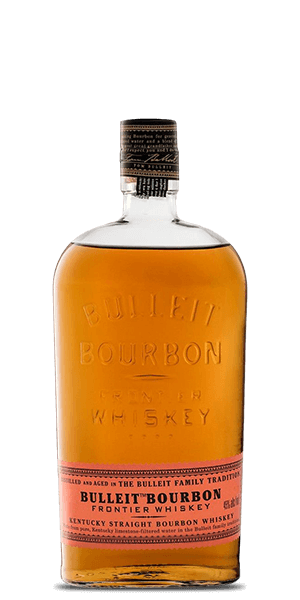 Bulleit Straight Bourbon Whiskey is the foundation upon which Bulliet was built, using the famous family recipe. That means the mash bill consists of 68% corn, 28% rye, and 4% malted barley. It is made from pure Kentucky limestone-filtered water and locally sourced ingredients. There are no wheat or grain fillers, and every percentage point of that mix serves a specific purpose. The corn makes it sweet and savory, the rye adds some spice and body, and that dash of barley makes the yeast happy by goosing the fermenting process. Aged in charred new American white oak barrels and bottled at 45% ABV, this stuff is truly wonderful, winning Double Gold medals, "Best Straight Bourbon," and many more accolades.

The Flavor Spiral™ shows the most common flavors that you'll taste in Bulleit Straight Bourbon Whiskey (1L) and gives you a chance to have a taste of it before actually tasting it.

Nose / Aroma / Smell
The nose is rich and thick with warm spices, toasted oak, and toffee.

Flavor / Taste / Palate
The palate is smooth and assertive at the same time with notes of vanilla, baking spices, english toffee, and a dash of pepper.

Finish
The finish is smooth and drying with lingering toffee notes.

Erik, Nov 1, 2020
This is my go to of Bourbons and my favorite liquor that I take neat every time!

Bruce, Oct 12, 2020
Enjoy Bulleit; the rye being a little less "punch" than this one for me. Depends on the mood, I must try some of the elder version's in the line up.

Tony, Sep 20, 2020
Tasty! I find the nose to be very appealing, vanilla and a little citrus. Definitely feel the spice all the way to the finish, but it fades, leaving a little pepper and oak.

Nicholas, Sep 10, 2020
Amazingly complex and smooth for its price range. Any legit sipper under $30 is a gem.

Patrick, Aug 28, 2020
Not that great a bourbon for me. though it does have a nice chocolatey after taste, It gave me very bad indigestion.

Matthew, Aug 3, 2020
Has an interesting combination of smooth mellow sweetness and a sharper bold spice flavor that I find very balanced and easy to spend the evening with

guest, Aug 2, 2020
Burned but good after taste Would be good for mixed drink

Kyle, Jul 23, 2020
By far the most solid bourbon we've had to date. Notes of caramel, vanilla, and oak, not too stringent, and able to be sipped without waiting, though it does get more mellow after 15 minutes. Enjoy.

Dylan, Jul 15, 2020
Love this whiskey especially in a Kentucky mule

Scott, Jul 1, 2020
I really like it and have bought a few times. This one has a more spicy finish that some of my other favorites.

William, Jun 26, 2020
Smoother than Jim Beam. Not as spicey as JD. oak aftertaste. Not deep or complex