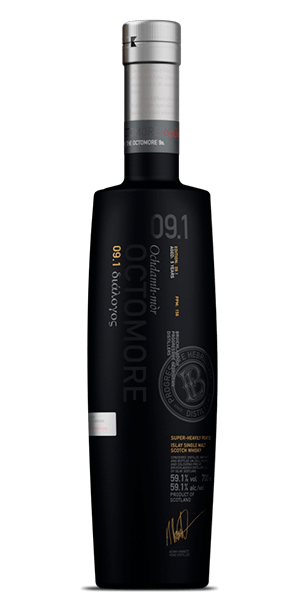 The Bruichladdich (brook-ladie) distillery’s history goes back to the 1880s when the Harvey brothers decided to make Whisky. It went through its renaissance in 2000 when a group of Whisky lovers revived it and got an esteemed Master Distiller Jim McEwan on board. Now, they produce 1.5 million liters of Scotch every year and each bottle is its own story. The people who make Bruichladdich Whisky are tough, stubborn and hard-working like their ancestors, but they are also nonconformist and believing in authenticity, they take risks and push the boundaries all the time. Now, the Spirit magicians of the Western Isles conjured something very special.

Octomore is a special line of superb peated Whiskies and the lads of Bruichladdich manages to trap the elusive smoke from the antediluvian subterranean world and use it to make an immensely elegant and subtle Scotch when you'd expect something aggressive and violent. At its 156 PPM, Octomore 09.1 is one of the most peated Whiskies and it's unlike anything you've tasted before. It's bold and breathtaking, aged for five years ex-American Whiskey casks, and limited to only 42 thousand bottles. It has a sleek and mature character that will treat you like a gentleman. Octomore's second name is Dialogos and a glass of this beauty will surely start a conversation.

The Flavor Spiral™ shows the most common flavors that you'll taste in Bruichladdich Octomore 9.1 and gives you a chance to have a taste of it before actually tasting it.

Nose / Aroma / Smell
Divine aroma of earthy and peaty smoke and oak with intense sweetness from the cask, cinder toffee and vanilla.

Finish
Long peaty finish with a maritime hint of salt.

Marc, Jan 8, 2021
Incredible richness of flavors, a very rough and strong scotch, develops so many tastes in the mouth. Over-priced though compared to Ardbeg (Uigeadail).

Heath, Jun 22, 2020
Perfect blend of smoke and peat. Smooth and drinkable. Drink neat and with just a drop of water, the flavors come alive.

Erik, May 2, 2020
If you want to get punched in the mouth with peat, this will deliver exactly what you want. But beneath the peat is some real depth of flavor with sweet and brine

Michael, Aug 16, 2019
A force to be reckoned with. Had to wait a month to review to completely understand it...definitely have to work your way up to it but it is so smooth surprisingly with a nice sweetness. Gasoline never tasted so fine ;) love it

Melynda, Mar 6, 2019
Very savory and meaty. A real smoke bomb that you can smell across the room. Not overwhelmingly dry, but has a great acidity that leaves you able to enjoy more.

Charlie, Feb 21, 2019
Smoke is through the roof, with a strong peatiness

Justin, Jan 19, 2019
After drinking this some more, I've come to appreciate it more. It's still a bit overpowering, but that's what you get with cask strength scotch. This is a great follow up drink if you been drinking other smokey scotch. Have a nice Laphroaig, Lagavulin, Ardbeg, or Caol Ila before drinking this to get your palette headed in the right direction.

Justin, Jan 18, 2019
Is it good? Yeah, it's good if you like smokey scotch, but it's a bit of one-trick pony and it's hard to justify the steep price. If you want over-the-top phenol to the max, this is for you. If you want something more subtle and complex in the same wheelhouse, check out the Laphroaig, Ardbeg, Caol Ila, or the Lagavulin. If you want something smokey and over the top, but much more affordable, try a blend like Peat Monster, Smokehead, or Smokey Joe.

Justin, Jan 19, 2019
After drinking this some more, I've come to appreciate it more. It's still a bit overpowering, but that's what you get with cask strength scotch. This is a great follow up drink if you been drinking other smokey scotch. Have a nice Laphroaig, Lagavulin, Ardbeg, or Caol Ila before drinking this to get your palette headed in the right direction.
Load more reviews