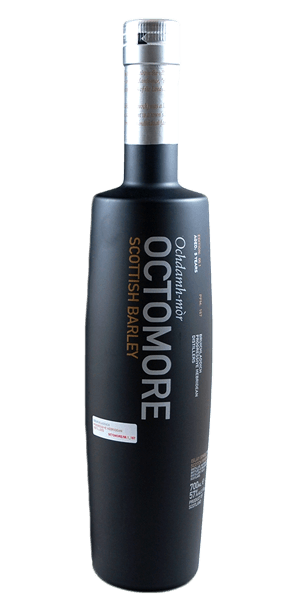 Breaking convention matters: The most Heavily Peated Scotch on the Planet.

Some years ago, Late at night, the creative folk at Bruichladdich stumbled, or rather, drammed on an idea, after a dose of their own medicine. They decided the break all norms and create the most heavily peated Scotch Whisky in the World. They wanted to show everyone that the quality of Scotch isn't just a function of its age. Thus, they created the Bruichladdich Octomore, named for James Brown's farm above Port Charlotte, where in days past a distillery produced very heavily peated Whisky.The Octomore 06.1, their 6th edition,  was aged for 5 years and has a PPM (Phenols-per-Million) value of 167! For reference, Laphroaig's Quartercask stands at around 50. Absolutely insane, this is a must-MUST-have for peat freaks!

The Flavor Spiral™ shows the most common flavors that you'll taste in Bruichladdich Octomore 06.1 and gives you a chance to have a taste of it before actually tasting it.

Comment
Breaking conventions matter. And Bruichladdich has done so brilliantly. This is Peat heaven, a wet dream for peat lovers.

Jacob, Jan 28, 2020
This tastes like the smoking man walking through a forest fire set off by volcanic ash into a field of burning vanilla plants - but in a good way. Smoke builds and builds with a pleasant sweetness underneath.

Thomas, Mar 9, 2018
Like drinking the best BBQ. Too pricey to enjoy all the time.

Robert, Feb 6, 2018
Sure, it's smoky. You smell it as soon as you open the bottle. It isn't like normal peat, though. It is more like a BBQ smoke. And the flavor is much more sweet than smoky. This is really a fine dram.

Patrick, Nov 30, 2017
So far, anything Octomore is a 10 for me. I love peat. I can't believe how balanced the Octomores are for how young they are. Where's the Octomore 7.1 on the list? I couldn't add it to my collection but it's one of my favorite bottles.

Mr., Aug 21, 2017
Very peaty. Enjoyed it but it was more of a "tried it" and have a hard time imagining keeping a bottle around to enjoy. It's definitely worth a taste!

guest, Apr 26, 2016
I have the 6.2 edition. Even though extremely heavily peated, still drinks easily. The cask strength also adds to its uniqueness and character. I love it!
Load more reviews