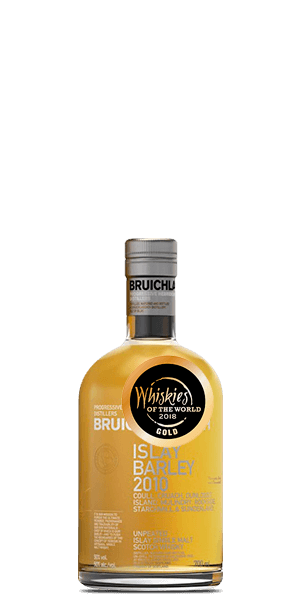 Bruichladdich distillery on the island of Islay has been creating some of the finest Scotch Whisky available since 1881. In recent years, this quality has resulted from its Wine-based strategy of focusing their releases on origin, terroir, traceability, and authenticity. They are owned by the French company Remy Cointreau so what do you expect I guess? With celebrity support from none other than Harrison Ford you know they must be doing something right. Their bold experimentation of late has led to series such as The Octomore, the world’s peatiest Whiskies.

This release, however, is something they’ve kept closer to home. The Islay Barley bottlings from the distillery always use barley grown on farms around the island. Every now and again they make a version of this homegrown malt that’s even more special and has just used barley from one specific farm and harvest. This is what we have here with the Rockside Farm 2010. Other than a few Angus beef cattle this farm focuses its production purely on the highest quality barley for the Bruichladdich distillery. With this release, you get the incredible opportunity of tasting an Islay grown malt that is unpeated and relies purely on the natural flavor of the barley. A real unique treat. This may be a bit younger than other Scotch you can get your hands on but the quality of harvest that has gone into this Whisky means it should not stay in the Cask for a moment longer.

The Flavor Spiral™ shows the most common flavors that you'll taste in Bruichladdich Islay Barley 2010 and gives you a chance to have a taste of it before actually tasting it.

Finish
Zesty lemon and a hint of salt.

guest, Dec 16, 2020
Quite similar to the classic laddie, but not as soft. Practically the same on the nose; caramel, light, and citrusy. Body tastes similar, and the finish is smooth.

guest, Oct 31, 2020
Butterscotch, apple and some malt on the nose, really pleasant! Initially got a vanilla custard on the palate with an oily mouth coating. Finish had some lemon zest, oak and spice. Found this to be unique!

Ivan, May 25, 2020
Incredible. Very malty, fruity sweet, ocean saltiness and cereal. It's probably my favorite. Comparable to bruichladdich the organic but sweeter.

Eric, May 20, 2019
A wonderful dram, sweet but not too sweet, floral, and a rich mouthfeel. Bought two bottles as soon as I could find it.

Chris, Jul 19, 2018
I clearly taste the apple, but earlier in the flavor spiral. Sometimes alcohol content can be deceiving, but this is true to form and a bit too hot for my taste. Still, enjoyable.
Load more reviews