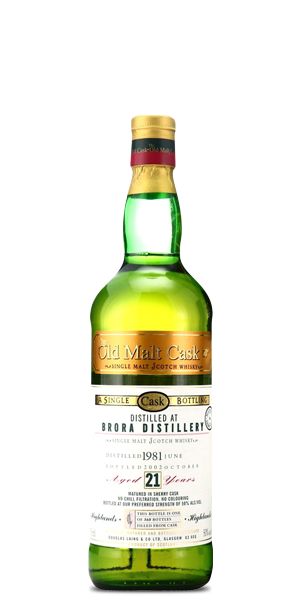 When demand for your Whisky production grows, you either expand your current distillery or build a new one, slap a new brand name on it, and double your stakes in the Spirits game. That's what happened to this Highland distillery.

Originally named Clynelish, a second distillery was built next door in 1969. The new one became Clynelish and the old one was named Brora. The Brora distillery eventually closed in 1983, whilst production has continued at the newer Clynelish site. However, it was announced in late 2017 that the distillery would reopen again, hopefully...

This robust peated expression is a Single Sherry Cask of 1981 Brora from Douglas Laing's Old Malt Cask range. Distilled in June and aged for 21 years, 360 bottles were yielded in October 2002.


*This bottle is a collector’s item; we will not be able to entertain any refunds or exchanges.

**Individual orders are limited to one item per person, as we wish to give everyone the opportunity to participate.

What does Brora 1981 Douglas Laing 21 Year Old taste like?

The Flavor Spiral™ shows the most common flavors that you'll taste in Brora 1981 Douglas Laing 21 Year Old and gives you a chance to have a taste of it before actually tasting it.

We invented Flavor Spiral™ here at Flaviar to get all your senses involved in tasting drinks and, frankly, because we think that classic tasting notes are boring.
Ratings & Reviews
Member Reviews and Ratings of Brora 1981 Douglas Laing 21 Year Old