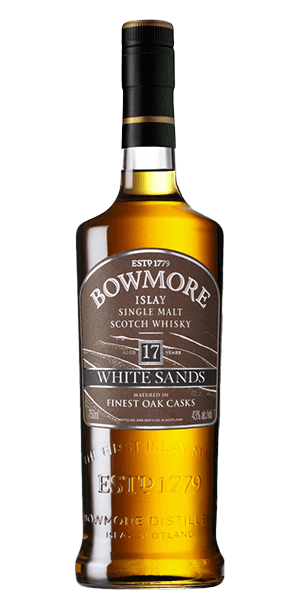 Where the sea and the past meet.

Founded in 1779, The Bowmore Distillery is one of the oldest in Scotland. This storied distillery lies on the west shore of Islay where they make one of the most recognized smoky drams in the Whisky world. Islay is special. For centuries, all they had in this rugged land was the local barley, clear spring water, peat for fuel, and the sea. If you take all that and wring it into a barrel, you get Bowmore — a classic single malt Islay Whisky that clings to the memory of the waves and the times gone by.

The sea... The maritime notes and pristine white beaches of Laggan Bay, a stretch of coast just south of the distillery, are also the inspiration behind their latest expression. The Bowmore White Sands 17 YO is part of their new travel retail series and has been matured for 17 years in ex-Bourbon casks within Bowmore’s legendary No.1 Vaults, the oldest maturation warehouse in Scotland.

The past... The 17-year-old was once the flagship Whisky of the Bowmore distillery, but it has since been replaced by the 18-year-old. The former is still very popular with Bowmore fans though and even Bowmore’s master distiller Eddie MacAffer has named this dram his personal favorite. That being said, this complex mix of rich treacle toffee and ripe exotic fruits bound together by warm peat smoke (per MacAffer’s description) stays true to the brand and represents everything we love about Bowmore and Islay.

The Flavor Spiral™ shows the most common flavors that you'll taste in Bowmore White Sands 17 Year Old and gives you a chance to have a taste of it before actually tasting it.

Nose / Aroma / Smell
Vanilla and malt with breezy notes of the sea.

Mehrdad, Sep 5, 2019
Smove Carmel start to a smoggy finish I enjoyed this a lot and would definitely get more bottles.