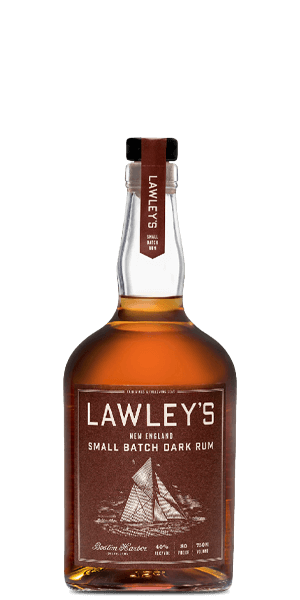 A nicely complex Dark Rum that is vatted for eight weeks with barrel staves for a smoother, more flavorful profile.

The second entry in Boston Harbor Distillery’s pursuit of Rum greatness is Lawley's New England Small Batch Dark Rum. The edition starts with the same process as their White Rum. That means 100% molasses and copper pot distillation with narrow "heart" cuts of the Spirit. This Dark Rum is different because it is vatted. The Spirit is placed into large wooden vats along with loose staves, heads, and chimes from their used barrel inventory. The Rum rests there for eight full weeks, now imparted with vanilla and wood spice notes.

Smartass Corner:
At one time there were sixty-three distilleries in Massachusetts and thirty more in Rhode Island.

The Flavor Spiral™ shows the most common flavors that you'll taste in Lawley's New England Small Batch Dark Rum and gives you a chance to have a taste of it before actually tasting it.

Nose / Aroma / Smell
On the nose, look for notes of brittle toffee, menthol, and a bit of melon.

Flavor / Taste / Palate
The flavors are nicely complex, starting with a light butterscotch note that leads to toasted oak, vanilla, a hint of banana, and a light spice.

Finish
The finish is long and lightly sweet.