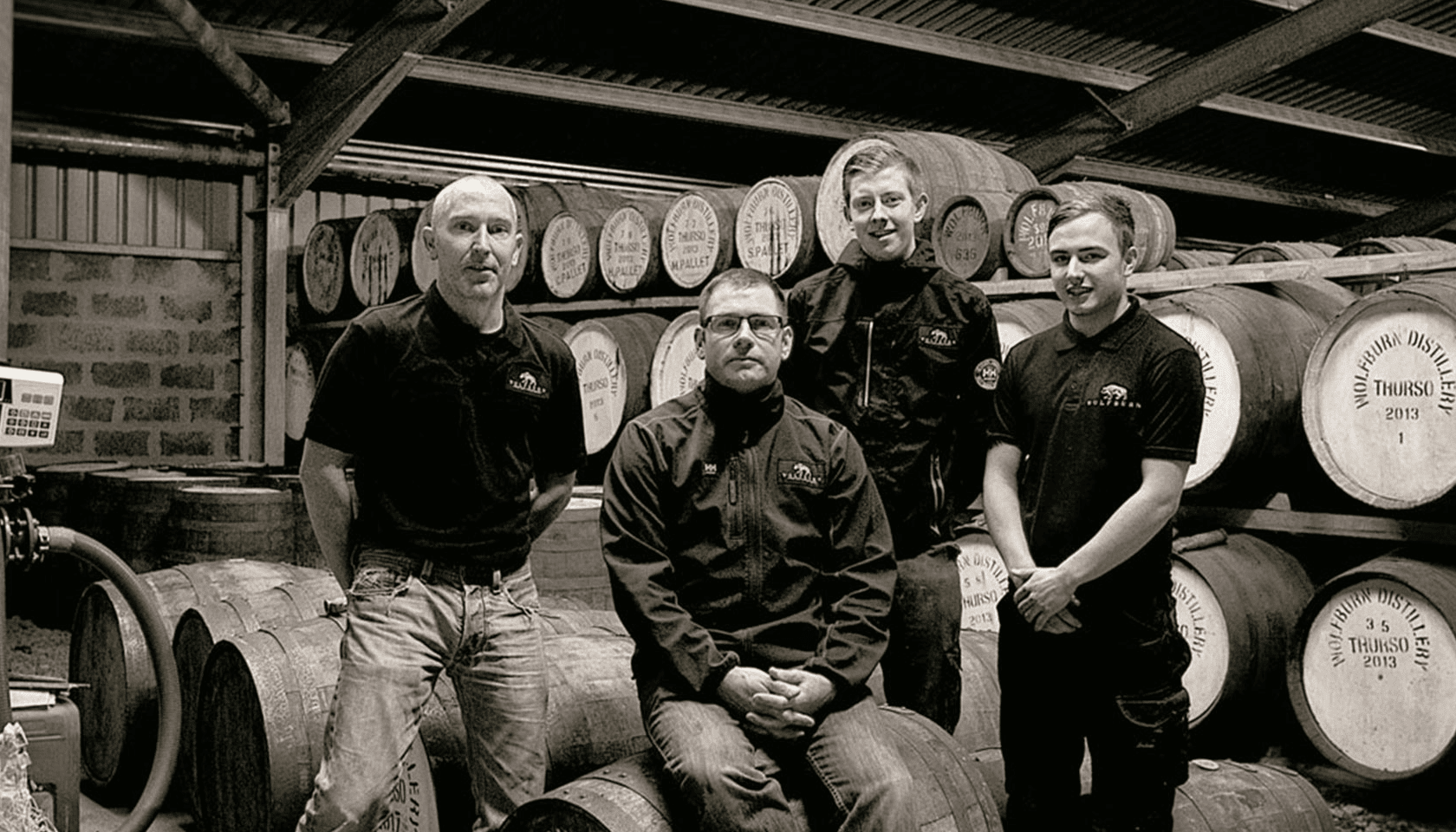 The parallels between Wolfburn and Jon Snow’s domain in “Game of Thrones” seem obvious on the outset. For one, the distillery is located in the northernmost part of the Scottish mainland. For two, it’s really damn cold up there. For three, they’ve even got “wolf” in their name.
But instead of battling white walkers on the precipice of the Wall, the crew of Wolfburn have a much more valuable proposition in the north: making some of the best new Whisky you’ve laid your hands on.

And for that, you can thank Shane Fraser, the distillery manager at Wolfburn. We sat down with him to learn a bit about the newcomer that’s making waves with Whisky aficionados and what the future has in store for them. 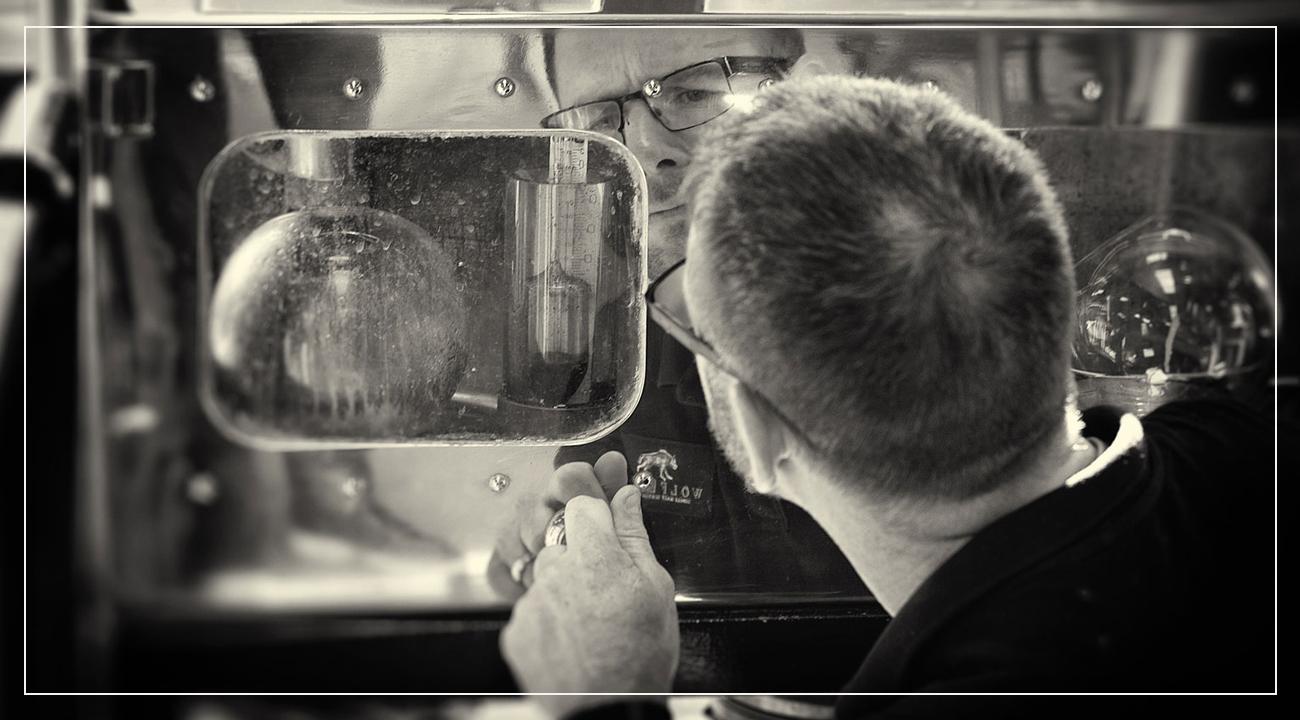 A Tale of Two Distilleries

Located in Thurso, Caithness, the distillery has a history rooted in the ghost of a former operation of the same ilk. “The name Wolfburn comes from the old distillery, which was founded in 1821 and which disappeared well over 100 years ago. It’s also the name of the water course from where the distillery draws its water."

"‘Burn’ is the Scots word for stream, so the name literally means ‘Wolf Stream.’ There used to be wolves in these parts, but like the old distillery they also vanished many years ago! But, yeah, it's good area for making Whisky. It's not too hot so you're lucky if you ever get up to 20 degrees Centigrade in the summertime. It's fairly cool. Got a lot of wind and a bit of moisture because we're right next to the sea as well, you know.” 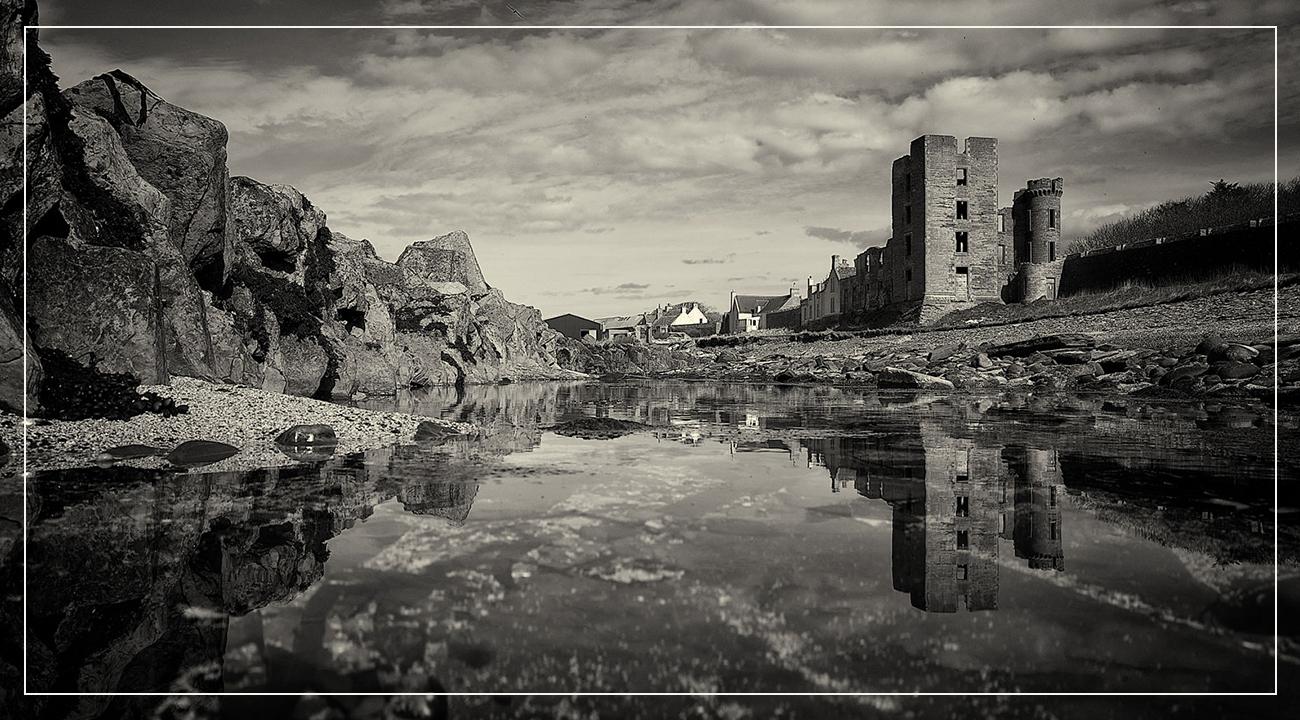 The distillery broke ground in August 2012, just 300 meters from the original distillery. Since the beginning, it was important to both Shane and Wolfburn’s founders that their Scotch was made in a slow, unhurried fashion. See, the distillery prides itself on following tradition, which means from milling to bottling, no automation is involved. Everything is done on site by hand.

And these guys are sticklers for tradition. They’re using the water from the Wolfburn to create their Scotch—just like the original operation. 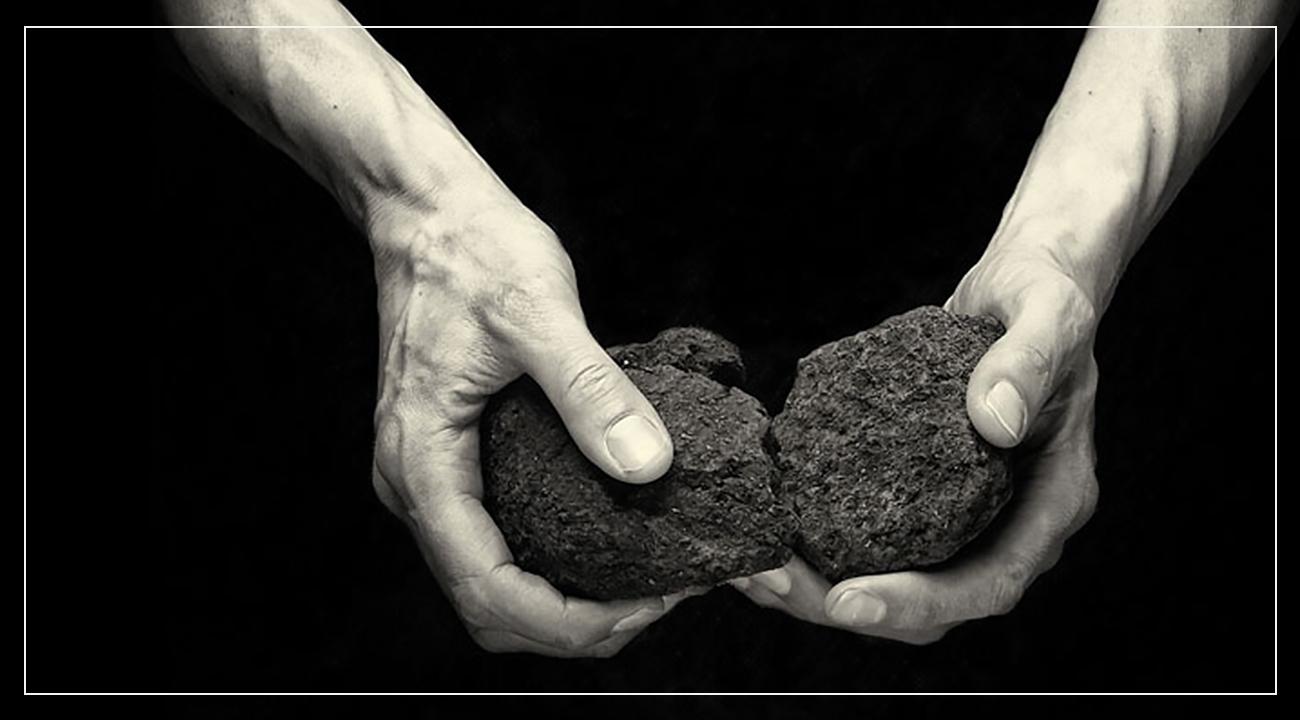 The Making of Wolfburn Whisky

Producing the very first Whisky for a distillery can be tricky business. Shane—who’s spent time making Whisky for the likes of Royal Lochnagar Distillery, Oban and Glenfarclas—took up the challenge by focusing on a crucial component of the process.

“It really starts with the mashing. The mashing is quite standard but it's how we pump our worts. Our worts are pumped very slowly so we don't get any solids into the washbacks. So we've got quite a vibrant fermentation. I had a rough plan but you're never entirely sure exactly what you're going to get coming off the stills until you actually get it. And to be honest, I think it's turned out better than expected. It's really quite malty and fruity and it's really, really nice. It's quite special.”

Wolfburn uses a mix of first-fill Bourbon, Sherry, Rum and Port casks to age their drop. And you can imagine, each imparts their own flavor in the Scotch. Which is how their three main bottlings—Northland, Aurora and Morven—came to fruition.

“The Northland, the very first one we released, is entirely out of quarter casks—the ex-Islay ones. So the unpeated spirit goes into a peated cask, and you get a slight peatiness coming out of that. Not too heavy, just enough. Fairly light background notes, quite malty and sweet and precise in what it is, you know. Very drinkable."

The Northland, the very first one we released...Not too heavy, just enough. Fairly light background notes, quite malty and sweet and precise in what it is, you know. Very drinkable.
"The second version was Aurora, which is 25% sherry casks and 75% Bourbon casks. A heavy sherry influence in there. And that's a completely different taste to the Northland. It's got spiciness and kind of dried fruits and nuts. So they're two very different Whiskies. You still know it's coming from Wolfburn, but it's just got those different flavors. And it's from the different casks.”

1) If you could have one superpower, what would it be?
To go forward or backwards in time. Forward: to taste Whisky. Backwards: to change bits in a distillery that would make lives a bit easier. It'd be mainly going forward, I think. Just to be nosy.

2) How would you explain your Whisky in three words?
The best there is. Okay, that’s four. Perfectly hand-crafted.

3) What is your favorite music and what drink goes with it?
My favorite drink is probably a mojito and some nice chill music. Nothing specific, just something nice to relax with. That'd be my favorite because it reminds me of holiday. It's just nice and chill, and it's cool.

4) What would you eat and drink for your last supper?
A massive filet steak with some nice red Wine—and our Whisky to finish it.

5) What’s your second favorite Whisky?
I would have to go back to my first distillery and say Lochnagar, specifically the Selected Reserve.

Where is the love?

For a relatively young distillery producing single malt Scotch, Wolfburn has earned itself quite a large fan base. And it seems like both sides of the pond agree—this Whisky is the business.

“Anybody who really likes good quality Whisky will probably like our Whisky because it's not too sharp. It's not too heavy. You know, it's not like a 30- or 40-year-old Whisky."

"I think there's a wide range of people that like it, you know. I had a gentleman and his wife in about two or three weeks ago and they've likely visited 80 or 90 distilleries. They've been doing that for 30 years. And they were blown away by it. They were just like, ‘Wow. This is just totally different.’ So the feedback is just phenomenal."

Anybody who really likes good quality Whisky will probably like our Whisky because it's not too sharp.
"But you get a lot of people who go, ‘Oh, it's not old enough.’ That's fair enough. That's their point of view. You have to take it both ways. But honestly, 99% of the people who come and taste it, love it.”

“I was in the U.S. last November with Pacific Edge. We were going round some of the liquor stores and bars, and people were trying it for the first time. And they were amazed by it. It's the same when we’ve been to Japan and Europe, as well. They seem to all love it. And some might have a preference for Northland or they like the Aurora for the sweetness. While some people like the Morven with its peatiness. It’s very varied. The most popular one so far is still the Northland by a wee bit.”

Since we’re featuring Northland on our virtual shelves, we couldn’t help getting Shane’s take on his original expression.

“Most people are really quite surprised by how young it is. You tell them that some of the Whiskies are only four years old and they're like, ‘What are you talking about? It can't be that.’ It tastes like a six- to eight-year-old Whisky, you know. That kind of brings a smile to my face." 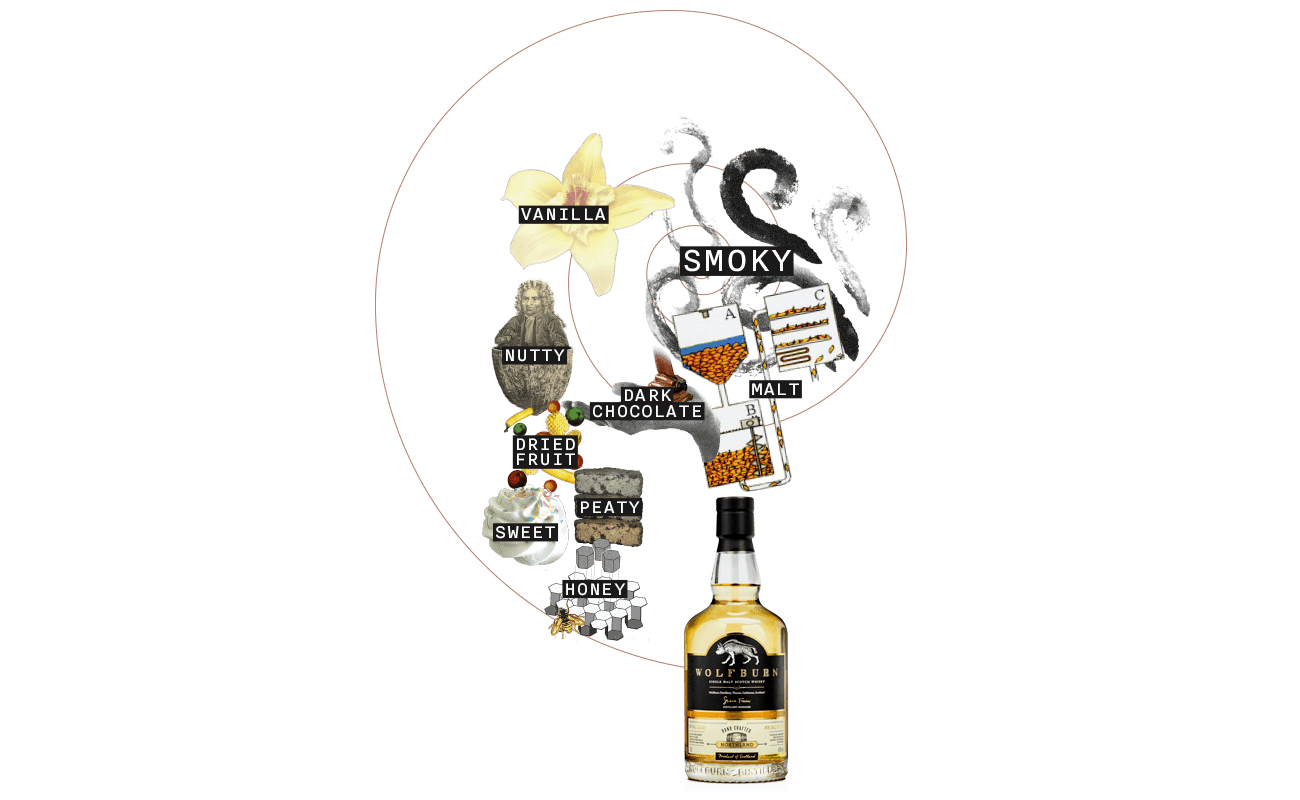 "People think it's just quite special and they're all kinds of excited about how it’ll taste once it gets older. And they're already asking if any aged shipments are coming out and when they can sample that. I wish I had a crystal ball to kind of answer that. I don't.”
Read more about:
Published May 24th 2018
By Jackie Gutierrez-Jones