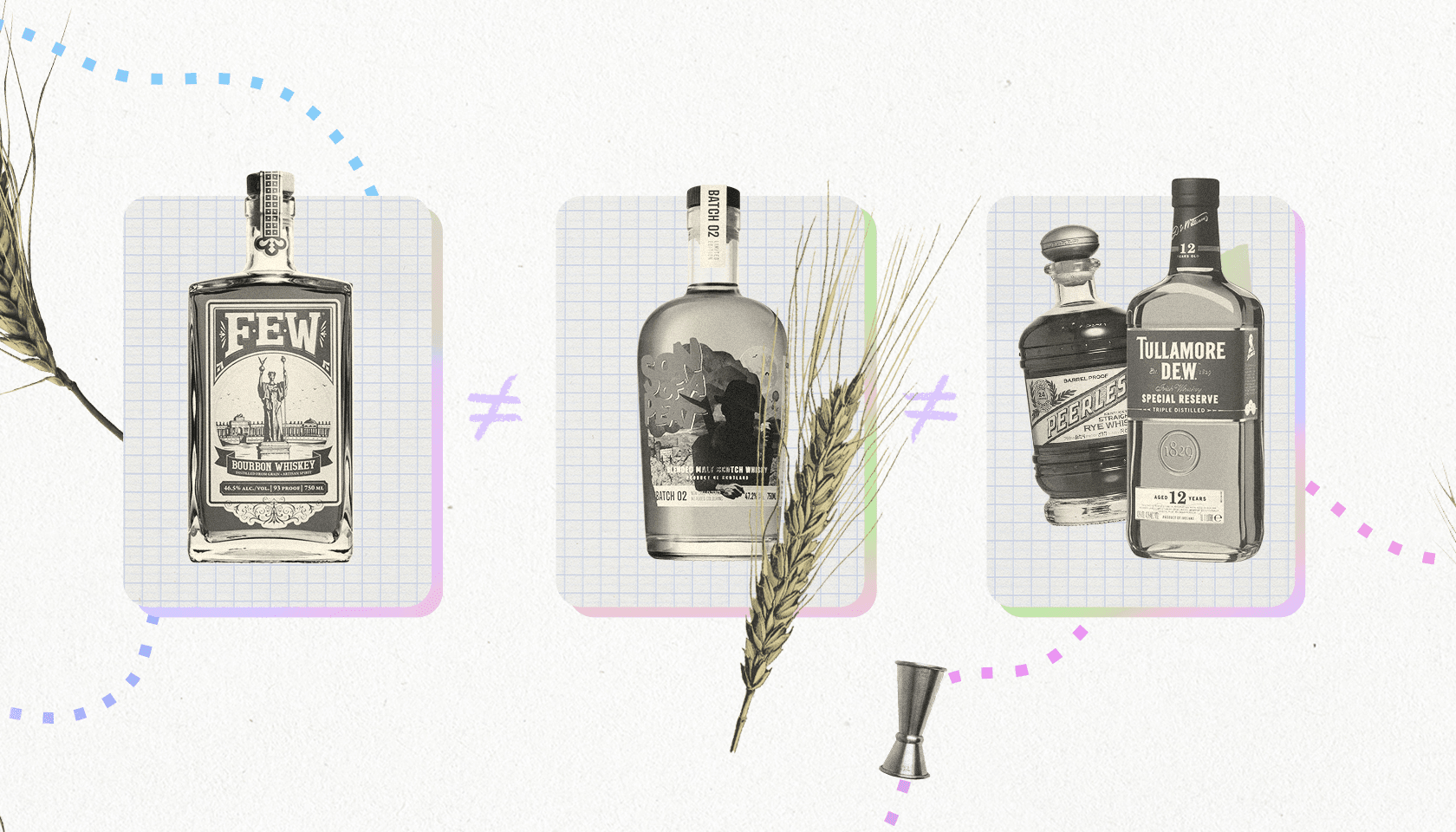 Ever wondered what the actual differences between Whiskey, Scotch and Bourbon are? Country of origin? Production process? Flavor profile? We've got you covered in our new video with a short and sweet explanation.

What’s liquid, brown and has the ability to make you feel warm all over? Uhhh… no. Not THAT.  [toilet flushing]  This is a booze channel, for peat’s sake.

We’re talking about Whiskey, of course. And Scotch. And… Bourbon. ‘Cause they’re basically all the same, right? Au contraire, young Grasshopper. Let’s take a closer look.

Whiskey is any distilled alcoholic beverage made from fermented grain mash that’s aged in wooden casks. The mash can be made from a variety of grains including barley, rye, corn or wheat — and that leaves a lot of room for interpretation and experimentation. Like that one time at band camp…Anyway.

It helps to think of Whiskey as a catch-all category — like wine. Cabernet Sauvignon is very different from Chardonnay, but both are classified as wine. Same principle applies to Whiskey — Scotch and Bourbon are two very distinct Spirits, but both technically fall under the Whiskey label.

Even though Scotch and Bourbon are both Whiskey, there’s an ocean-sized difference between the two. We mean that quite literally. See, according to the Scotch Whisky Act of 1988—that’s “Whisky” without an “e” by the way—Scotch must be matured in oak casks for three years or more in Scotland.

Now, Bourbon is governed by similar rules laid out in the Federal Standards of Identity for Distilled Spirits. Which sounds FBI-level intimidating, but it’s really just a set of rules that ensures Bourbon maintains the distinct taste that it’s known for. It’s “America’s Native Spirit,” after all. And one of the rules of engagement is that in order to earn the “Bourbon” label, your whiskey—that’s with an “e”—must be made in the U.S. of A.

Stateside, you’ve got to make sure that your Bourbon doesn’t enter the barrel at anything higher than 125 proof and can’t be bottled at anything less than 80 proof.

For both Scotch and Bourbon, turns out... it’s not a whole lot. If you’re looking to nab the official “Scotch” label, the Scotch Whisky Act says that your Spirit must be noticeably absent of any added substances that aren’t water or plain caramel coloring.

In Bourbon’s case, the U.S. turns things up a notch. Absolutely nothing can be added to your hooch except for water — yep, even Spirits need to stay hydrated.

Moral of the story is: being related doesn’t mean being identical. You can love your crazy cousin Glenn without sharing his Star Trek obsession, right? Same goes for Scotch and Bourbon. Even though they’re part of the same Whiskey family, each one stands as its own unique Spirit. And that’s something worth toasting to.