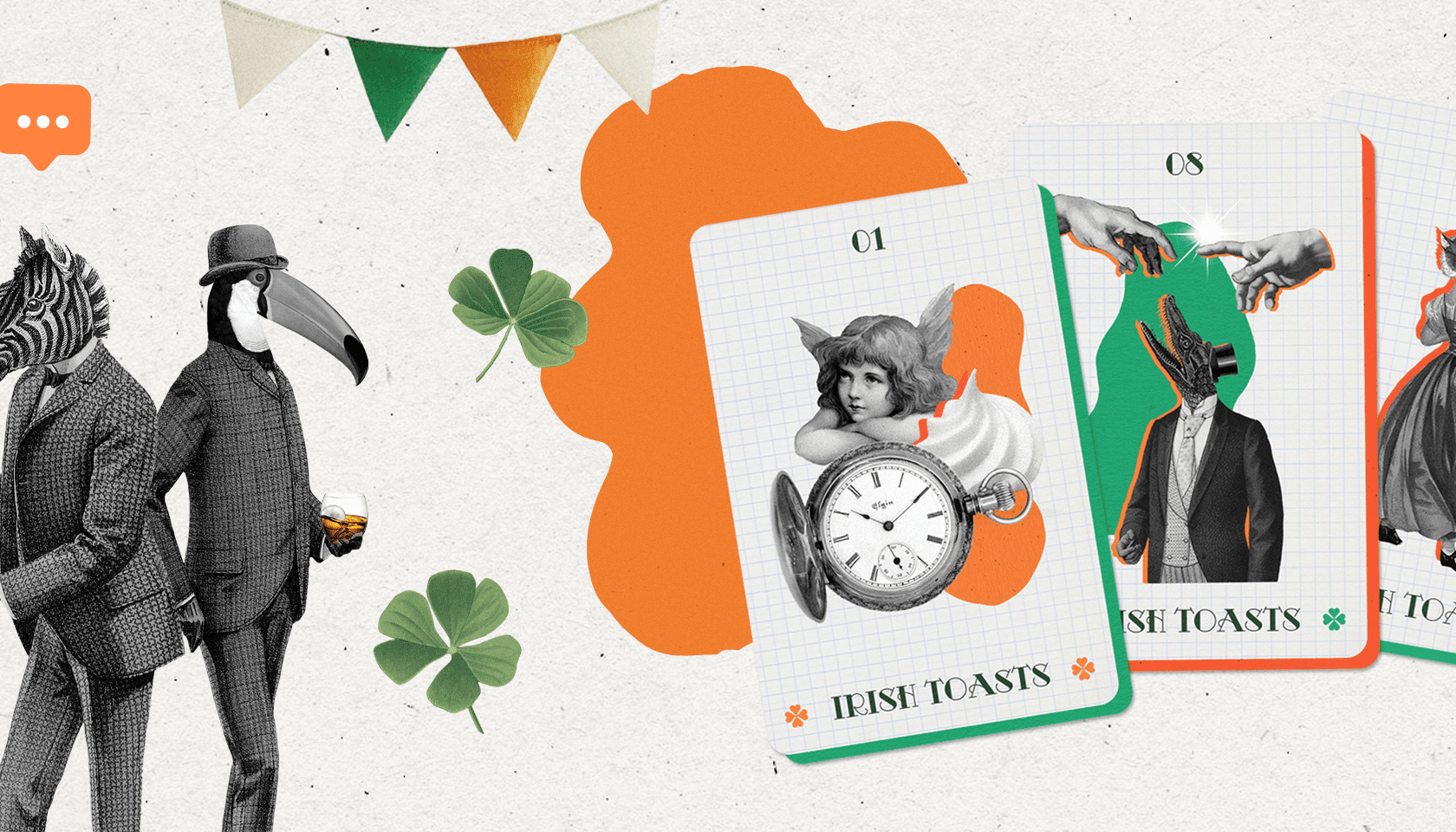 St. Patrick’s Day is just around the corner, and if you actually want to drink as the Irish do, here are some classic Irish toasts to honor St. Patrick. So throw a shamrock in your glass, and lift a dram with these clever Irish toasts. Sláinte!

The legend has it that St. Patrick, who brought Christianity to Ireland and hunted snakes in his spare time, once ordered Whiskey and, to his dismay, got a glass that wasn’t quite full. He told the barman he had a devil locked up in his cellar, and that the demon thrived on the dishonesty of men. The barkeeper immediately topped Patrick’s glass, while the saint declared Whiskey is to be enjoyed on his holiday.
Here’s how you honor St. Patrick: put a shamrock in your Whiskey, say a toast, throw the shamrock over your left shoulder, and down the Spirit. Then, wait for fortune to arrive. Do keep in mind that you have a 1:10.000 chance of finding a four-leaf shamrock, though.
There’s a better chance of finding a great booze-related video in your feed if you subscribe to our channel and hit that bell button.

The ritual of wishing each other nice things before having a drink has been around for quite some time. The most popular theory is that it started in the Middle Ages when men in tights wanted to avoid getting poisoned by clinking their glasses so hard, the drink would spill to the adversary’s glass. The truth is the Hebrews and Egyptians did it; so did the Persians, Greeks, Romans, Saxons, and Huns. And, of course, the Irish. And why even toast? It’s supposed to bring good luck and keep demons at bay - and simply because it’s fun.
Now, we opened this video with a lovely-sounding word: “Sláinte”. It means ‘health’ in Gaelic and it’s a drinking toast in Ireland, Scotland, and The Isle of Man. You’re supposed to answer with a “Sláinte agatsa”, which means “to your health as well”.
But the Irish are known for having poetry etched into their DNA, so one word just won’t do. Some of the Irish toasts are so creative, they’re fun to read even when there’s no booze involved.
Let’s put some Irish Whiskey in your glass and turn you into a pro toastmaster!

- May you be in heaven a full hour before the devil learns you’re dead!

- Here's to a long life and a merry one. A quick death and an easy one. A pretty girl and an honest one. A cold beer - and another one!

- Here’s to eyes in your head and none in your spuds!

- May a mouse never leave your meal bag with a tear in its eye.

- May you die in bed at ninety-five years, shot by a jealous husband. May you live to be a hundred years, with one extra year to repent.

- May the Good Lord take a liking to you — but, not too soon.

- May the good Saint Patrick protect ye, and the devil neglect ye.

- May your bank account always be like the capital of Ireland — Always Dublin!
The best way to say a toast, however, is by telling a short story. Let them earn that drink.
Our favorite is: “Here’s to cheating, stealing, fighting, and drinking. If you cheat, may you cheat death. If you steal, may you steal a woman’s heart. If you fight, may you fight for a brother. And if you drink, may you drink with me.”
The main idea behind Irish toasts is basically living a long and healthy life, finding a great partner, and hanging out with friends.
It doesn’t matter which one you choose, as long as it’s kind and scares away bad spirits. If you have your own go-to toast, do share it with us in the comments, and remember: Wherever you go and whatever you do, may the luck of the Irish be there with you!