Ever Heard of “Can-Dhu” Spirit, the Comeback Kid of Whiskies? 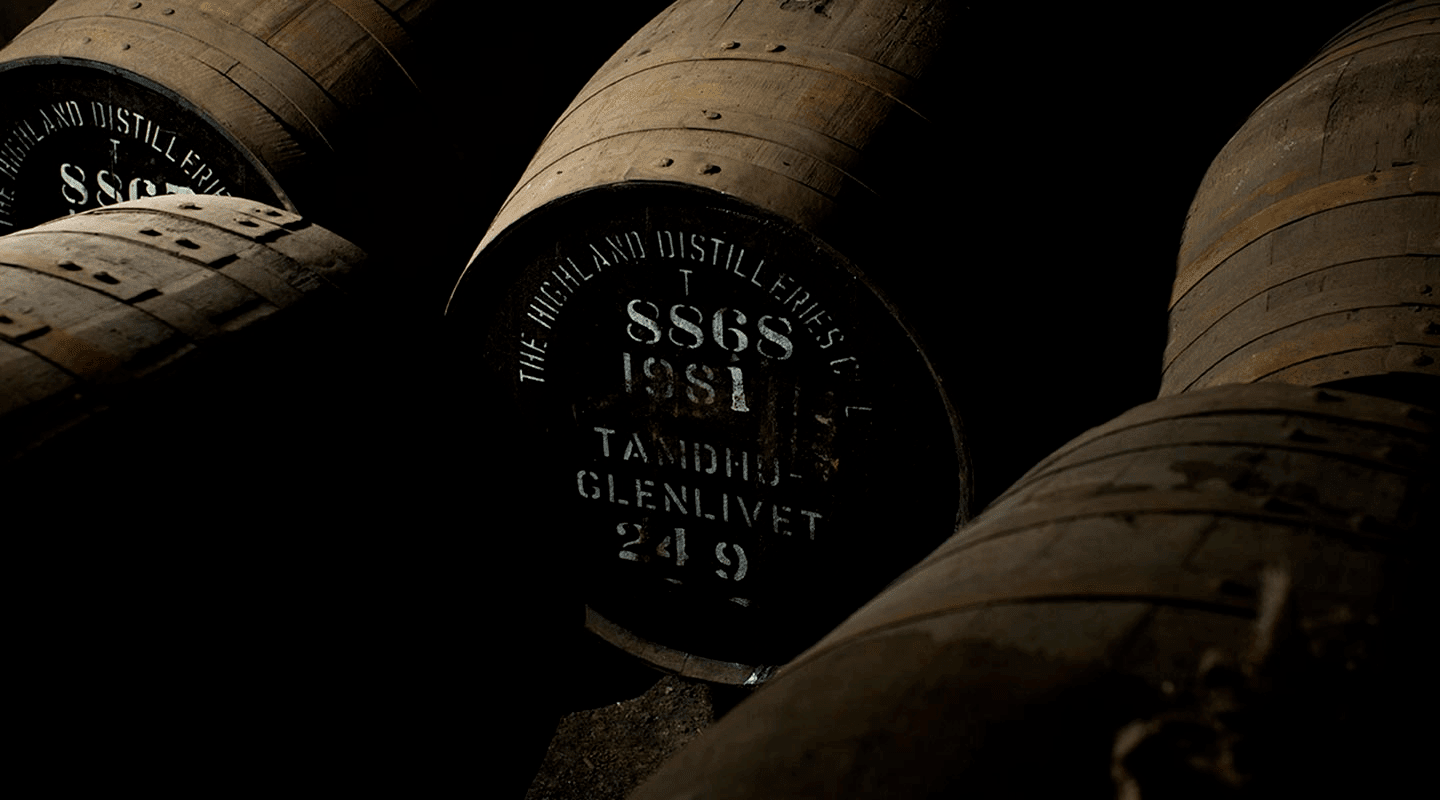 Let’s step back in time for a moment, shall we? Back to when bowler hats were the fashion norm, people were intensely fastidious about their facial hair and grooming, and one of the greatest Whisky distilleries of the time opened its doors.
Was this yesterday, you ask? Not quite. We’re talking about the Victorian Era—1897, to be exact. And the Whisky distillery in question was none other than Tamdhu, the “can-dhu” spirit.

Now, the name might not immediately ring a bell. And that’s okay—it was out of commission for a bit until the brand was relaunched by Ian Macleod in 2013.

So we sat down with Neil Boyd, the commercial director of Malt Whisky at Ian Macleod, to explore this lesser-known, exceptional malt.

Mind schooling us a bit more on the history of Tamdhu?
It’s very interesting history. The distillery opened in 1897, which was the height of the Victorian Era—Britain was very influential at the time. So Scotch was in a good position to spread out and it enjoyed a great explosion around the world, which caused the growth of larger distilleries. 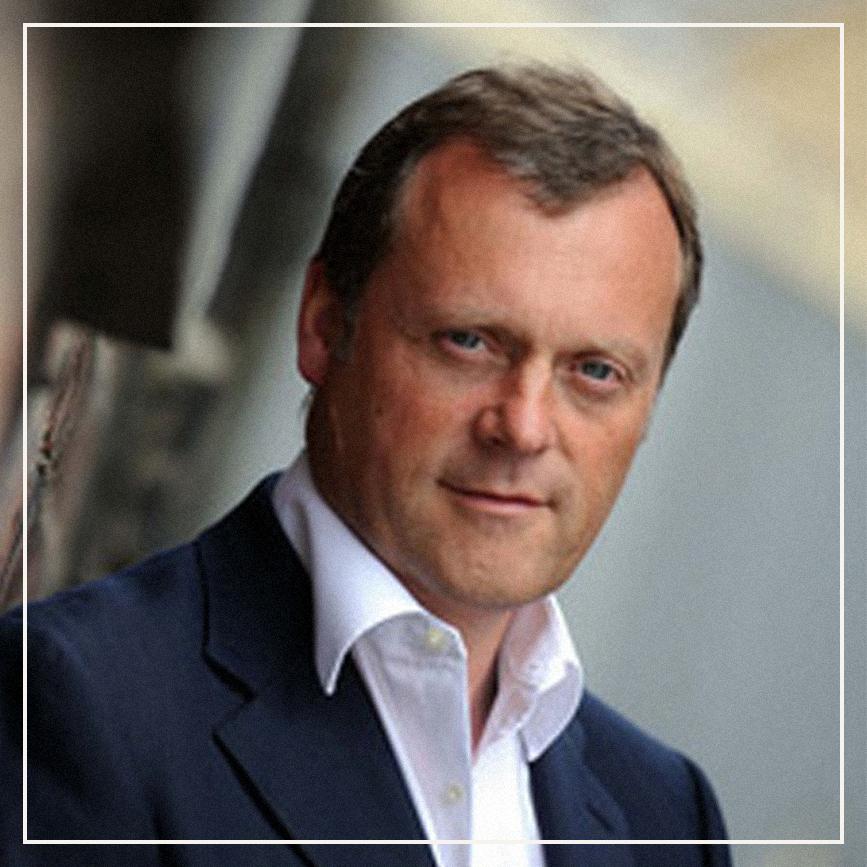 Established by a group of successful businessmen, some of them made their fortunes and very famous names in the Whisky industry, including Mr. Walker (of Johnnie Walker), Mr. William Grant, Mr. Buchanan, Mr. Thomas Dewar and others.

They had had already made their fortunes producing blended Whisky and selling it all over the world, but then they got together to build the ultimate distillery of the time. They worked with famed architect Charles C. Doig and implemented some of the most advanced technological inventions of the time, such as the Archimedes screw, to get the water from the ground.

But it sold shortly after, right?
Yes, relatively shortly after it was established, the founders sold Tamdhu to Highland Distillers, and they operated it for over 100 years. Then, they sold it to the Edrington Group.

In 2009, they closed and sold to Ian Macleod, a third generation small family business, who reopened in 2012 and relaunched the brand in 2013. 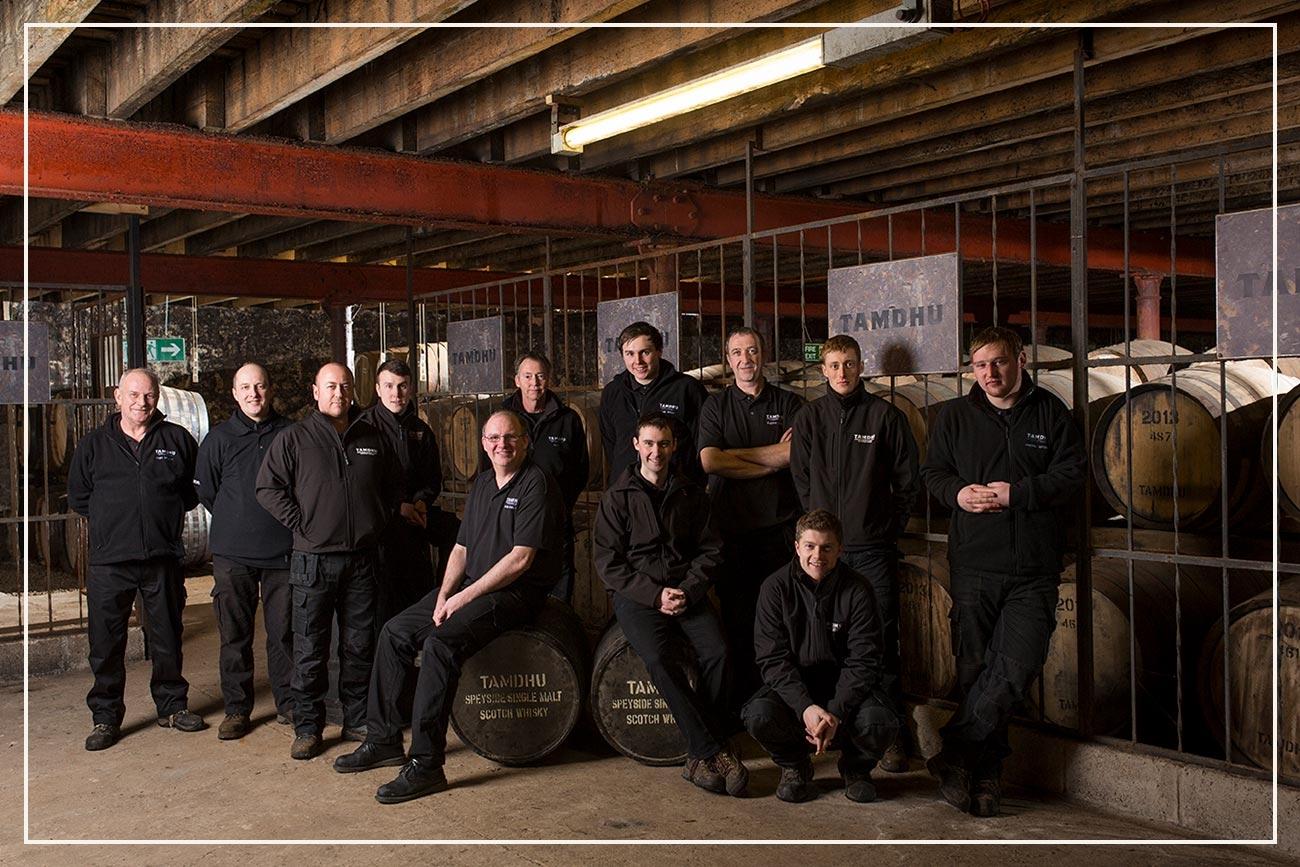 What makes Tamdhu standout from the rest of the Whiskies out there?
Tamdhu has always been good quality, mostly used for blends, but the distillers realized that the malts are really good—especially sherry matured. So we’re doing all of our aging in the oloroso Sherry casks, which gives our Whisky their recognizable flavor profile. It’s the ONLY Scotch that can claim this.

...we’re doing all of our aging in the oloroso Sherry casks, which gives our Whisky their recognizable flavor profile. It’s the ONLY Scotch that can claim this.
It actually takes over 100 years to get to a cask. They’re made from European oak trees grown in Galicia, Spain. They grow for about 100 years. Once the tree is cut down, and the wood is naturally dried, it’s shipped to the south of Spain, where Sherry is produced. The casks are then filled with Sherry, and after two years, they’re seasoned, so we can take them to Scotland and fill them with Whisky. It’s then another ten years for the Whisky to age.

A cask can be used maybe twice for a Whisky like Tamdhu, then we’d use it for blending purposes.

Taste-wise, what are we looking for in Tamdhu’s original expression, the 10 year old?
Our 10 year old is complex and rich, very slightly dry, with tiny bits of peat that some pick up but others don’t. It’s our standard expression and very well accepted.

There’s a certain appreciation for Sherry casks, so we’re going to continue to do it, and are currently spending a lot of money on buying the oloroso casks. Our Whiskies are relatively expensive because of that, since price is 1000-1200 USD per Sherry cask, which is multiple the price of more commonly used Bourbon casks. 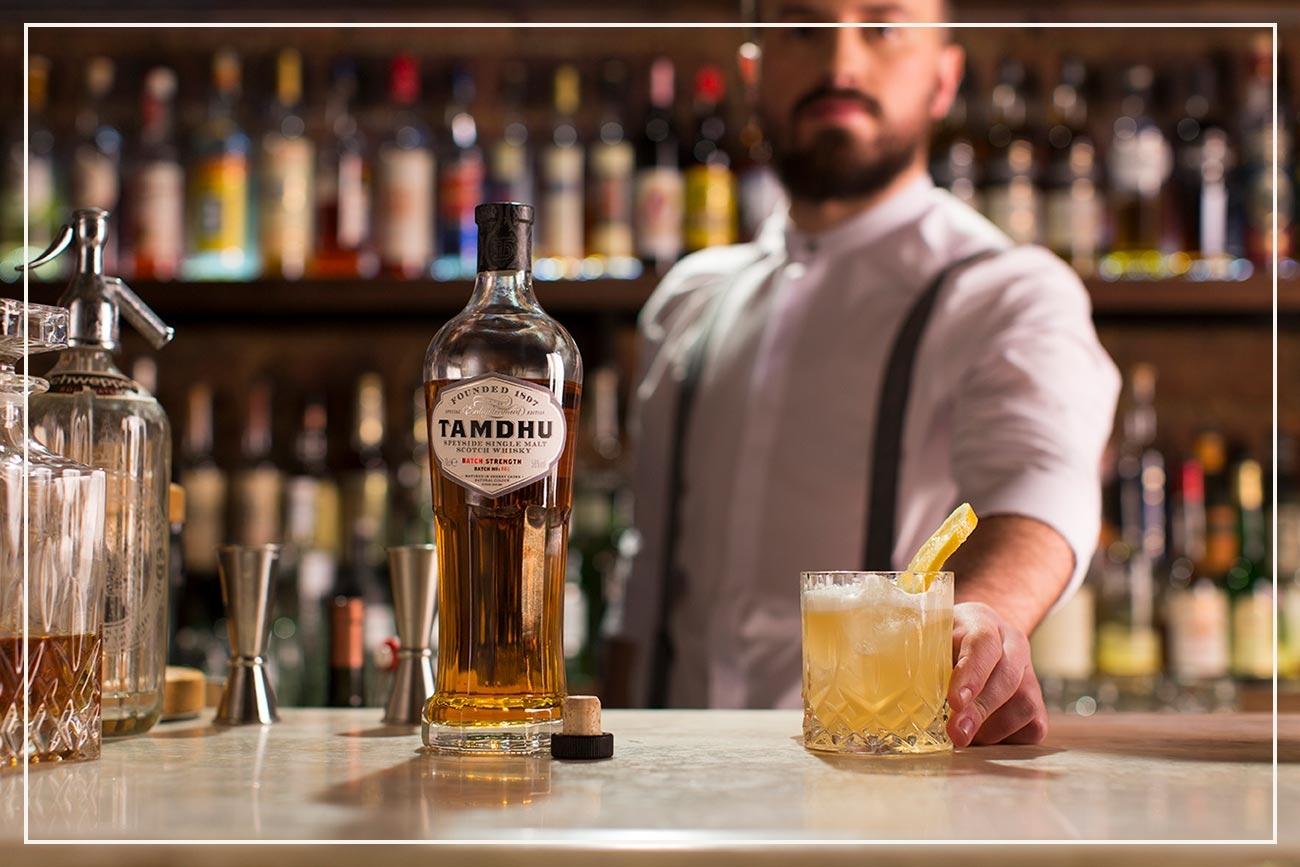 Our Whiskies are relatively expensive because of that, since price is 1000-1200 USD per Sherry cask, which is multiple the price of more commonly used Bourbon casks.
Okay, now what about that legendary 50 year old Tamdhu?
Tamdhu 50 was distilled in November 1963. With such a long time in the cask, the Whisky obviously takes flavors and influence from the cask and loses some of its youthfulness.

It’s quite a spicy, almost dry taste. It’s a rich, almost coffee-like taste sensation. Because it was aged in a good Sherry cask—first-filled European oak Sherry, to be exact—it retains some of the fruity spiciness that you want. I’d recommend to add a little of water to dilute it a bit. 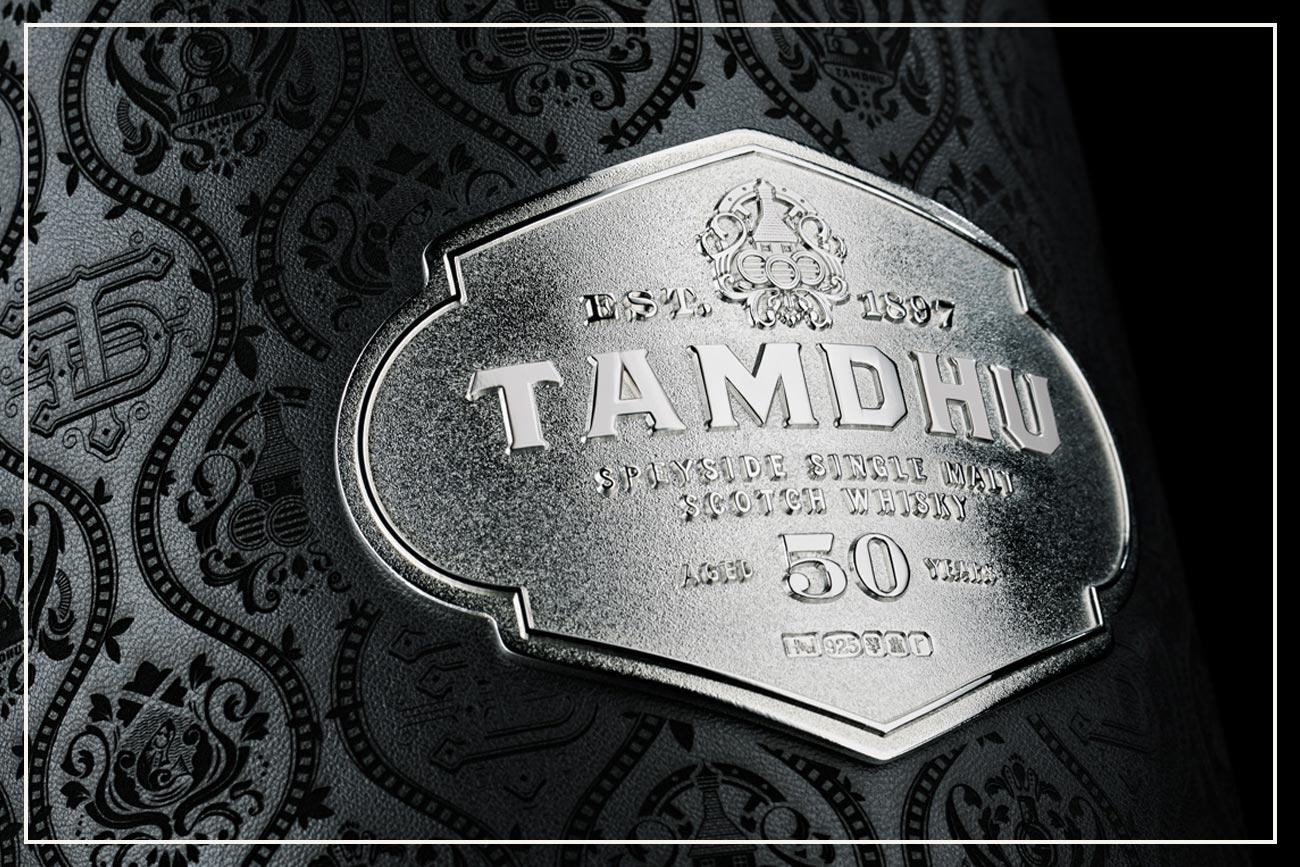 Even people who aren’t necessarily into Whisky are drawn to the beautifully designed Tamdhu bottle. It’s definitely atypical for a Scotch. How did this design come about?
We thought it was important to stand out. The design reflects the soda fountain, a glass design of the Victorian era. The label design reflects this time as well.

It has wide shoulders and an elegant neck. It was also designed with bartenders in mind. We wanted to be recognized for the Whisky and for the packaging—it’s elegant, an interesting shape, very tactile and feels great in your hand. Once you see it, you’ll recognize it from a distance.

Do you have a personal favorite?
I’ve tried many, many Whiskies all over the world and I tend to move around about the favorites. Right now, I’m very into batch strength Whiskies because they give you a lot of flavor, so right now my favorite would be Tamdhu Batch Strength No 002.

If you pair Whisky with oily or sweet food like chocolate, fish, or cheese, the spirit tends to cut through that oily coat and clean your palate. My favorite combination in this camp is a rich dark chocolate with a rich Sherry-aged Whisky.

Mind looking into your crystal ball and letting us know where you see the Scotch Whisky world going?
Scotch’s been around for a long time—it’s the largest Whisky category worldwide and it has just enjoyed its record year. As a category, it’s growing, and I think the future is particularly bright and will continue to grow for single malt Whiskies. They currently represent around 13% of the market volume, but 26% of the value. 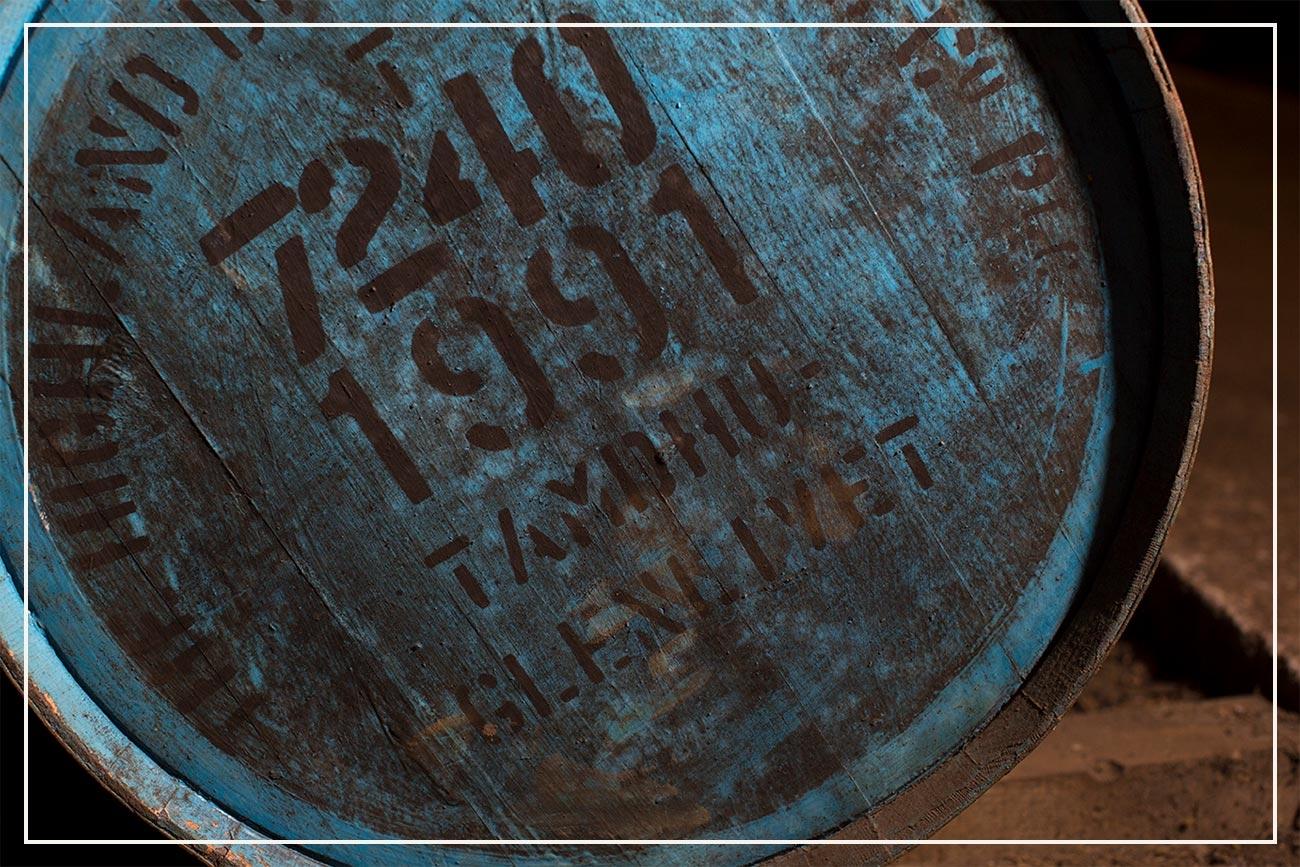 ...all the eyes are on the single malt—even though there are some great blended Whiskies out there.
The blended Whisky category is strong and large, but not growing at such a strong rate. Single malts have much more flavor range, even the packaging is more attractive and interesting.

From the innovation standpoint, there’s a lot happening in the malt category. So all the eyes are on the single malt—even though there are some great blended Whiskies out there.