Meet Son of a Peat, Flaviar's First Very Own Scotch!

Say hello to the ultimate winter dram and your favorite reverse chaser.

At first blush, Son of a Peat paints a mysterious picture. There’s an air of Clint Eastwood’s glare, Batman’s stoicism and Walter White’s cool, calculating demeanor. Some call him a vigilante. Others, a hero. One who fights for better Whisky...and a hell of lot less ignorance in this world. Us? We just call him “damn fine Scotch.”

To get all of the nitty gritty details, we sat down with the man who created Son of a Peat: Flaviar founder and Whisky maker Grisa Soba.

From marketing some of the world’s biggest spirits, to owning a bar, Grisa’s got extensive experience when it comes to spirits. He even produced his own Absinthe and Vodka. Needless to say, Grisa was definitely up to the Whisky blending task that lay ahead.

"Well, as you might’ve guessed already, he’s quite a character. A man of few words communicating with the world exclusively through punchlines. But it’s also the first Whisky Flaviar has created - a peated blended malt, to be exact, made by blending 8 single malts from 3 different regions."

It’s also the first Whisky Flaviar has created - a peated blended malt, to be exact, made by blending 8 single malts from 3 different regions.

"It was made in a very unique way. Usually when you make Whisky you either go by inspiration, or by market research. Either way, the process is pretty detached from your future consumers, you kind of just hope for the best. Instead, Son of a Peat was made specifically for Flaviar Members. We combed through piles of Flaviar Members' reviews to figure out what it would take to make the perfect dram... and then we made it. I don’t believe anyone has done it before, not at this scale." 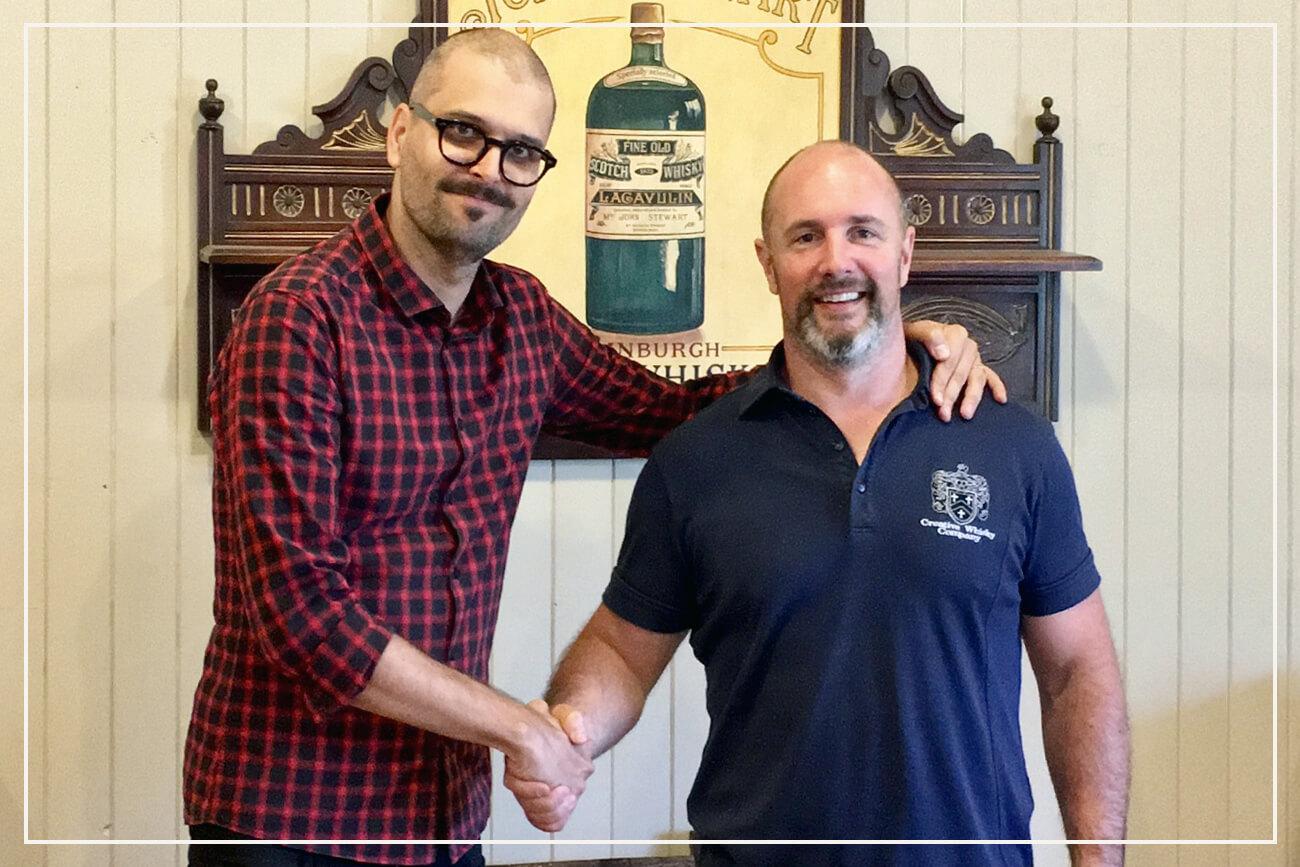 How did you approach the task of creating Flaviar's first Whisky?

"Based on member feedback and our own insights, the goal was to offer a high-end peated Scotch that is approachable both in style as well as price. It is blended for the flavor profile rather than an age statement."

Based on member feedback and our own insights, the goal was to offer a high-end peated Scotch that is approachable both in style as well as price. It is blended for the flavor profile rather than an age statement.

"It was quite an operation... (which rhymes with frustration)... but eventually, we ended up with 8 different single malts that I got to blend this past August. To do that, I travelled to Thornhill, Scotland, roughly two hours from Edinburgh, where Son of a Peat was finally conceived." 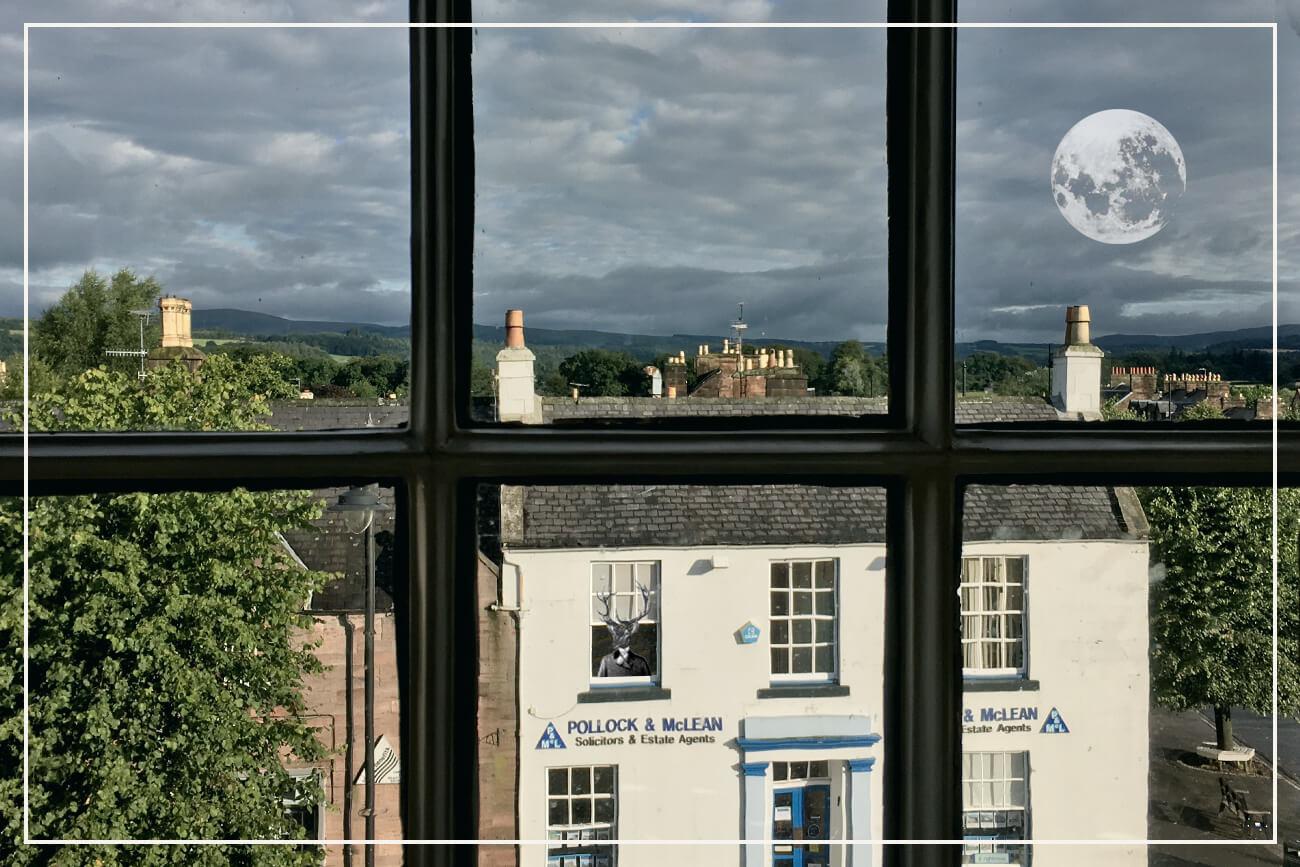 What single malts did you use for Son of a Peat?

"We wanted to achieve the ideal Member flavor profile, and for that I used single malts from Islay, the Islands and Speyside, that were aged between 4 to 16 years. Due to Scotch Whisky regulations, I can’t reveal any more details about the exact distilleries and the proportions of the different single malts used in the final blend, but I can say that I’m thrilled how they work together." 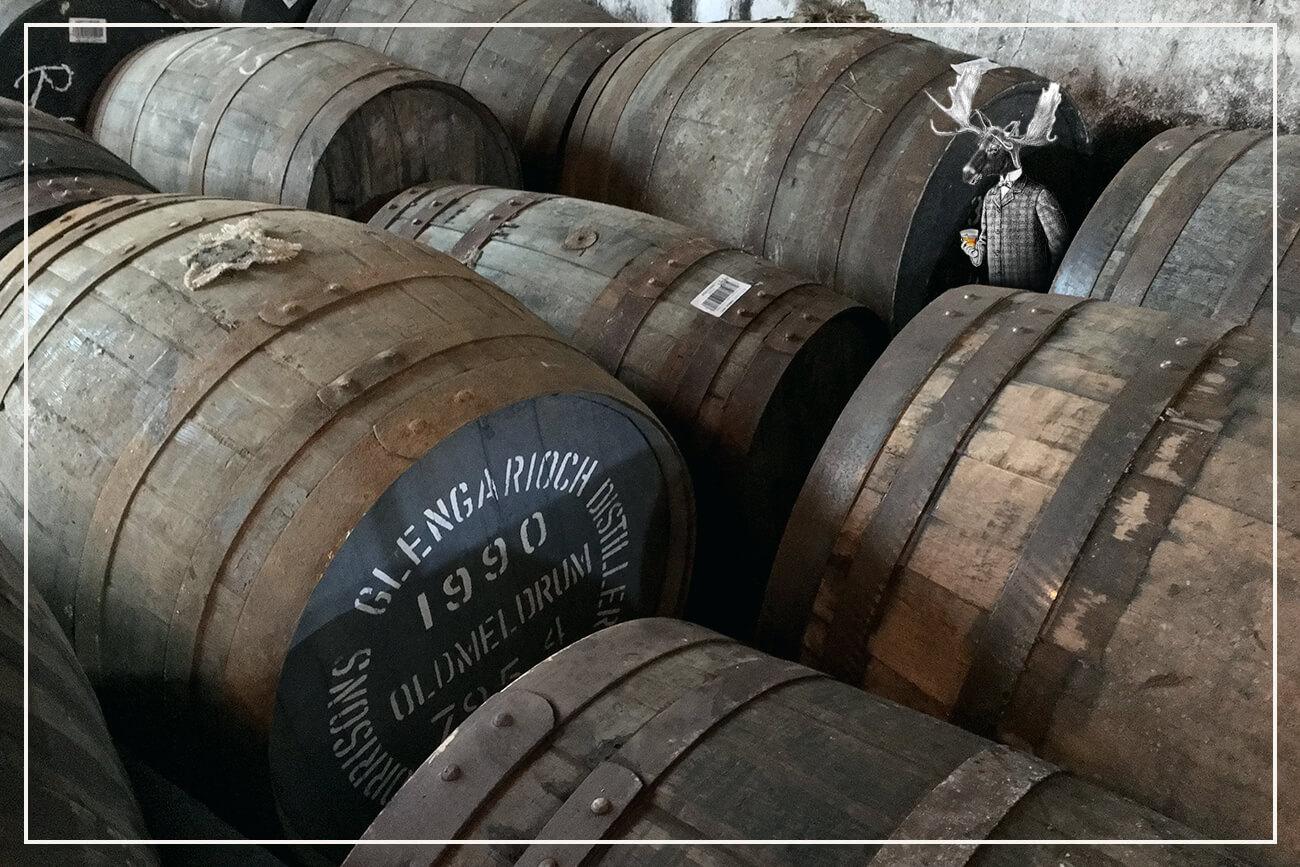 Faced with eight single malts and countless blending possibilities, how did you create that perfect blend?

"I guess every Whisky maker has their own approach. I use “the music producer's method,” which, honestly, I’m not even sure if it exists, but I’ll try to explain. So I start with the bassline track, the backbone of the Whisky that I’m creating. It can be just one single malt, usually no more than two. Then I play with different instruments, or in this case, drams. I’m slowly, one-by-one, adding audio tracks and playing with the volumes on those tracks - the ratios between single malts in our case."

"All the instruments, or flavors, need to coexist...play their role in what is to become a composition. It needs to be balanced, so you need to have constant awareness of the bassline, the high notes, middle range, and so on… and you should never forget what you set out to achieve in the first place. For example, if you only want some hints of Sherry, then be careful, because you can easily overdo it...same goes with peat."

All the instruments, or flavors, need to coexist...play their role in what is to become a composition.

"And now comes the toughest part, because one way or another, the palate and mind eventually get over-saturated, and because of that, I want to make sure I have enough time, a nice and friendly working environment, and some benchmark drams at hand." 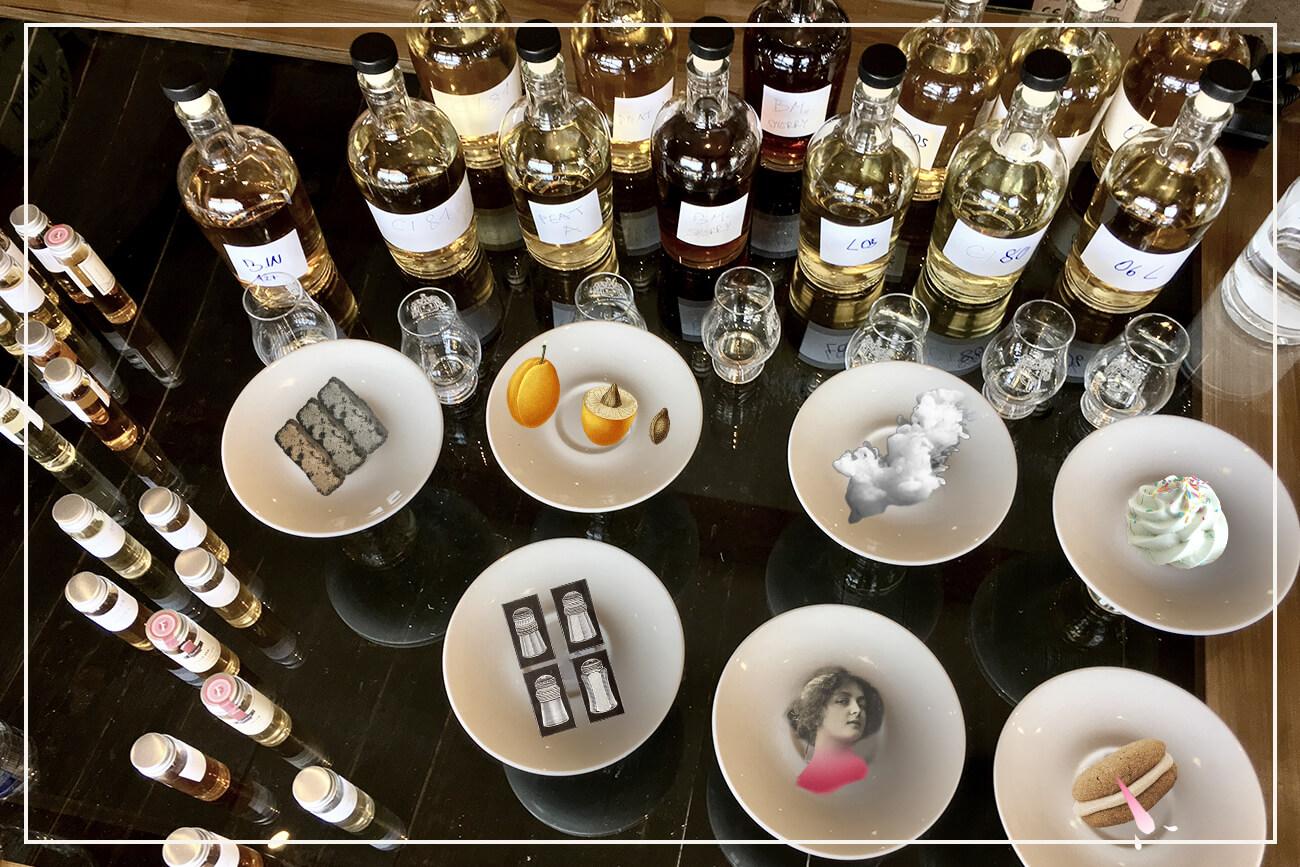 What was the most difficult part of creating Flaviar’s very first Whisky brand?

"If you’re just asking about creation of the Whisky itself, “the juice,” then I would probably say sourcing all the single malts we wanted in the final blend."

It took months of hard work, but seeing the final result, it was all worth it.

But there were also moving parts, especially in logistics and import, that gave the whole team some headaches and a few sleepless nights… It took months of hard work, but seeing the final result, it was all worth it."

Speaking of, it’s time to try Son of a Peat. What am I tasting here?

"I call it a smoking-gun-delight. But as you know, taste can be quite subjective, so I just encourage everyone to taste it and try to recognize some flavors... and then check the Flavor Spiral to see if there’s a match."

What do each of the malts add to the flavor profile of Son of a Peat? 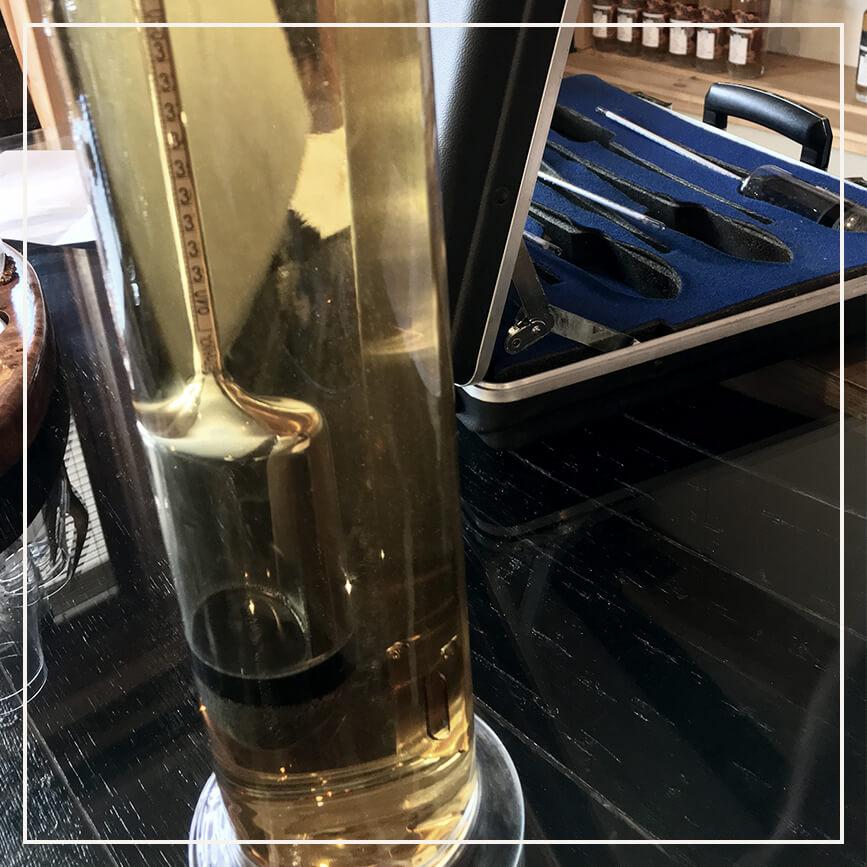 "I’ll answer with what each region brings to the table. The malt from Islay is all about peat, leather, and earth, while the Islands bring sea-salt and smoke. Speyside brings Sherried sweetness, green apples and some additional complexity."

"The result is a peated beauty that clocks in at a respectable 48.3% ABV."

Did you taste-test the Whisky on anyone?

"Sure, on Whisky-loving guinea pigs (laughing)… Our team also tested it, and a few lucky peathead-members got to sip it at the Craft Spirits Celebration. Everyone’s response was through the roof, so we’re super excited to finally be able to offer it."

"This Whisky was made for people who love Peated Scotch, but also for those who are just entering the world of Peatlandia. Honestly, you’ll still hate it if you don’t like peat and smoke, but if you're open-minded you will be royally rewarded."

This Whisky was made for people who love Peated Scotch, but also for those who are just entering the world of Peatlandia.

What’s the best way to drink Son of a Peat?

"That’s entirely up to you and your palate… some drink it neat, some add water, some add one small ice cube. However, if you’re up to something different I would suggest the reverse chaser.”

The Reverse Chaser
Step 1: Open up your favorite IPA
Step 2: Take a few sips of said IPA
Step 3: Follow it up with a chaser of Son of a Peat
Step 4: Witness taste buds doing something akin to a happy dance
Step 5: Repeat until your IPA bottle and a glass of Whisky are empty

How can I nab a bottle of Son of a Peat for my bar?

"Batch 01 is quite limited, with only 1,500 bottles available to our Members. But we’re leveling the playing field with a lottery system on launch day at sonofpeat.com. Mark your calendar for Friday, November 17. It’s going to be a hell of a happy hour!" 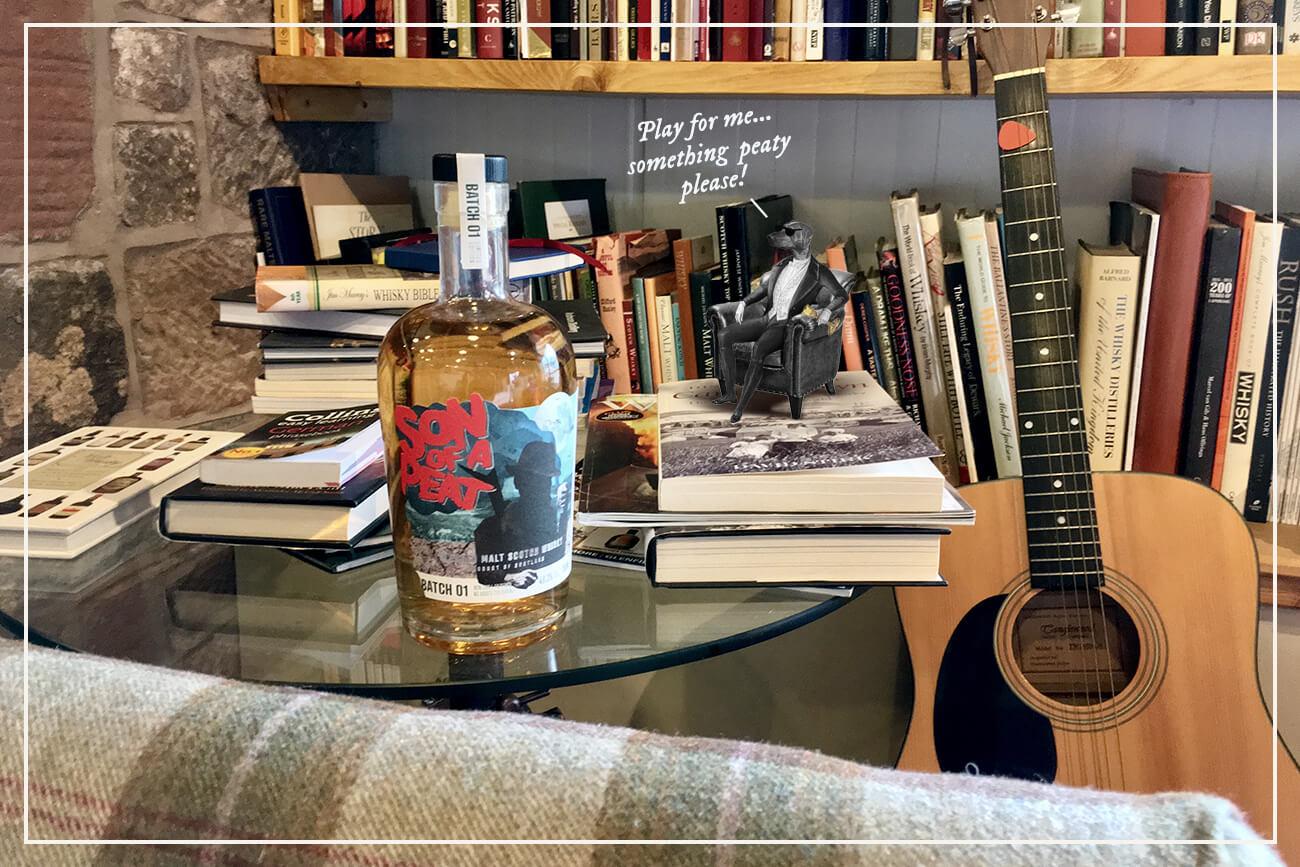