Smooth Ambler: High End Whiskey from the Birthplace of Moonshine 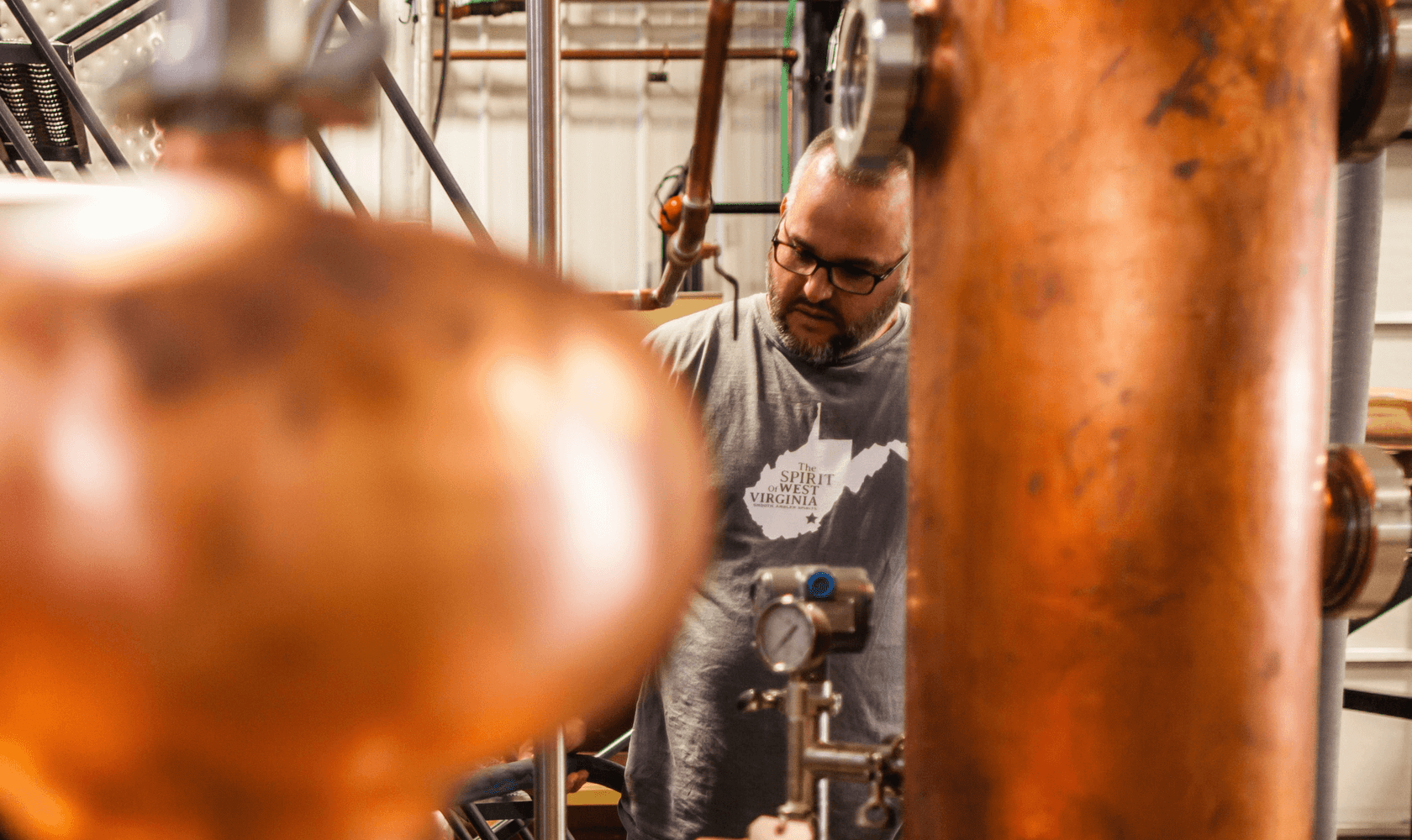 In West Virgina, the cradle of illicit American distillation, the team at Smooth Ambler are making the kind of spirits that their great grandfathers probably didn’t even think were possible. 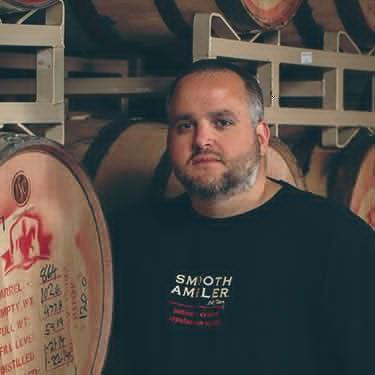 John Little, co-founder and Master Distiller of Smooth Ambler moved to West Virginia from the South and started the company with his father-in-law.

Openly and in a very straightforward manner, John answered our questions about what it takes to get a distillery business up and running. And he certainly has something to talk about – five years into the operation, they have just concluded their third expansion.

1. How would you describe Smooth Ambler Whiskey to the Dalai Lama?
Enjoyable.

2. What’s your second favourite Whisky?
Karuizawa. I like Japanese Whisky. I had a 28 year old Karuizawa two years ago in California and it was the best Whisky that I've ever tasted. I found it at Seven Grand in LA.

3. As a master distiller, what superpower would you want to have?
Invisibility. You can't get better when people don’t want to tell you the truth. I would love to know what people say about our spirits when I’m not there - do they really like everything about them, or do they wish something was a little bit different. That way, I could improve.

4. What’s your favourite music and what drink goes with it?
I have a wild range of music I like. But my favourite is probably Rage Against The Machine, with Bourbon and Ginger Ale. On ice in a plastic cup.

5. What would you want eat and drink for your last supper?
I’m embarrassed to admit this, but it would be fried chicken, mashed potatoes, collared greens and home made biscuits. I like real Southern soul food. I probably wouldn’t drink alcohol, but sweet tea. If it was alcohol, it would be a nice matured Bourbon. I would drink it very slowly and neat from a nice glass.

Can you tell me about the distilling heritage in West Virginia?
West Virgina is the only state in the US that is 100% contained in the Appalachian Mountains. It’s rough terrain and has historically been a very poor state. Lots of illicit alcohol production, Moonshine was around for hundreds of years, most famously probably in the early 1900s.

In one single year, there were about a hundred stills collected here, that is how popular moonshining was.

People from West Virginia are called mountaineers and mountaineers are always free and want to do their own thing. A lot of that was inspiration for us when we started the distillery.

That’s West Virginia culture; we’re rebellious in nature. We are called mountaineers and mountaineers were always free, so we really don't want to do what the government tells us to do. We want to do our own thing. A lot of that was inspiration for us when we started in the distilling business.

How and when did you begin distilling?
My father-in-law came up with the idea back in 2008. He read an article in Time magazine about the growth of the micro-distilling industry and said “You know we can do this in your garage”. We started production in March 2010 and in the beginning, family members were coming in to help.

Now they don't have to help us do the work anymore, but we like to organize parties at the distillery and invite our family and friends. 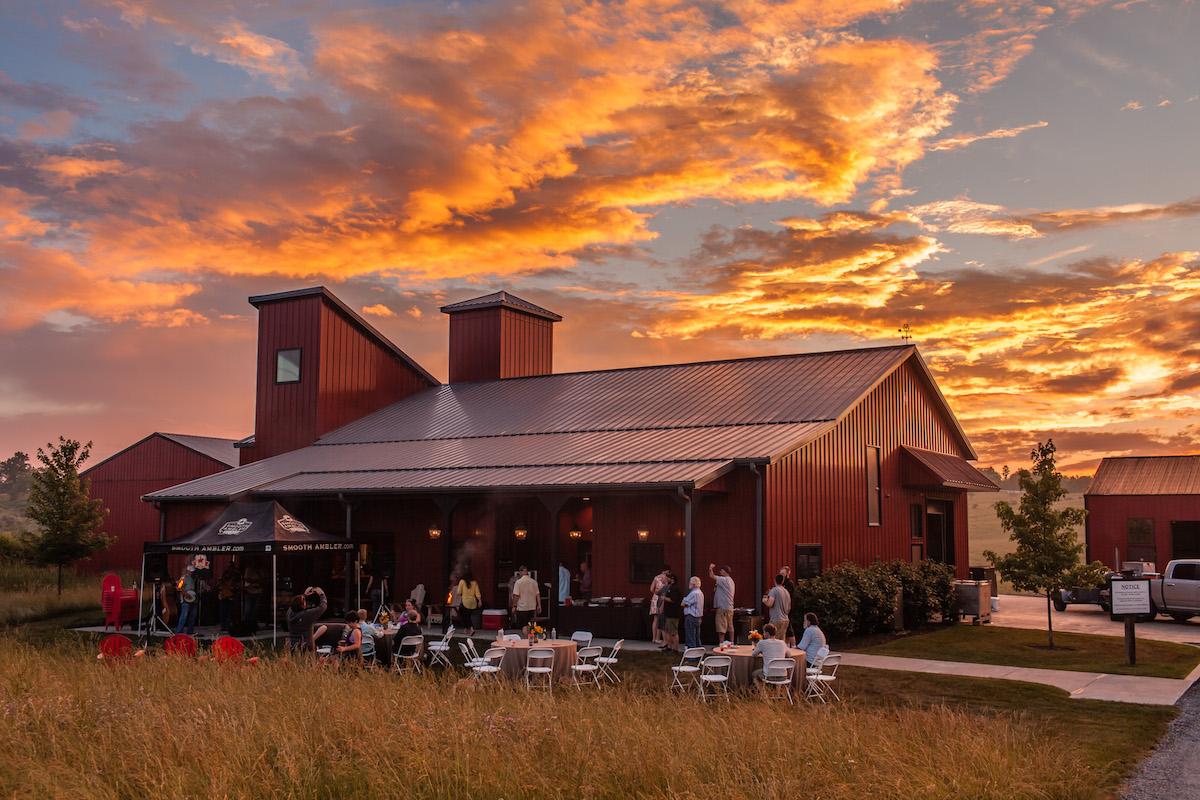 My father-in-law started with the idea to make Moonshine, because that was what he knew from history. I took that as a baseline, and then tried to do something very different and upscale with it.

West Virginians move a lot, because the economy is not very good and we wanted them all, no matter where they currently are, to be proud of what we did. As it turns out, we’re more popular in cities like New York or LA than anywhere else, and now we even make a Moonshine type product as a sort of throwback to our roots.

What characteristics do you see in the signature Smooth Ambler flavour?
The reason we wanted to be upscale is because in America, us West Virginians are made fun of because we’re poor. So we didn’t want to give anybody a reason to say, “oh, that's just another lowly West Virginia product” and that was the big thing we were going for.

I wanted for each product to be very high quality and different from what was available. It didn't even necessarily have to be consistent from batch to batch; I just needed it to be consistently great. 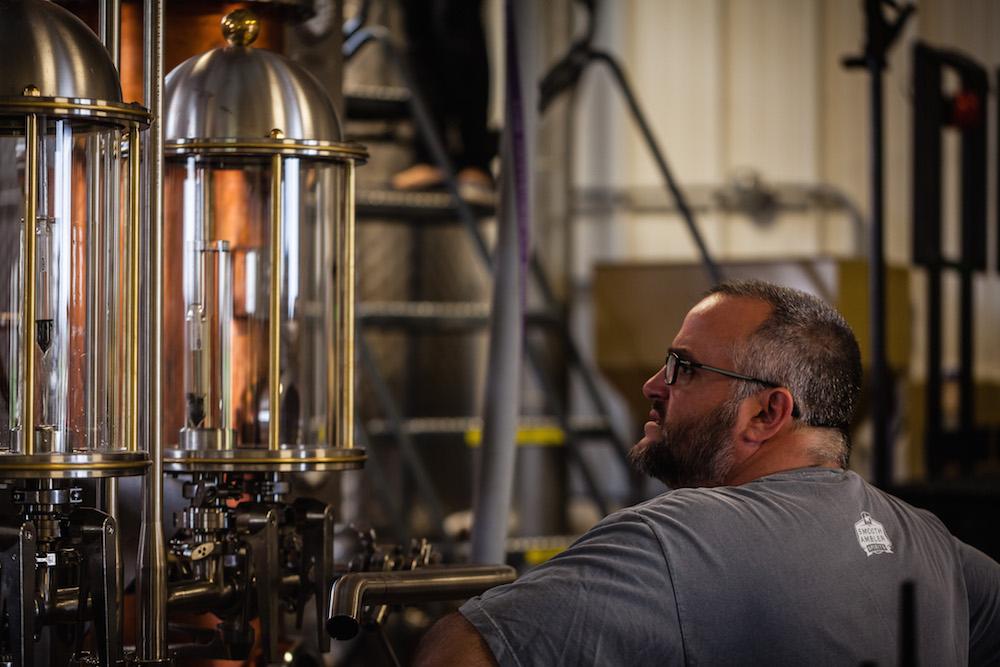 In terms of flavour profile, I never said I wanted it to taste a certain way. I wanted for each product to be very good quality and different from what was available. It didn't even necessarily have to be consistent from batch to batch; I just needed it to be consistently great.

When you started distilling five years ago, you had no experience. What was the learning curve like?
The learning curve was steep; we relied on a lot of people. Like that saying “It takes a village to raise a child”, this was the same thing. We relied on our still manufacturer from Germany, on our grain supplier, yeast suppliers... For a while, we also worked at a friend's craft distillery in Washington. 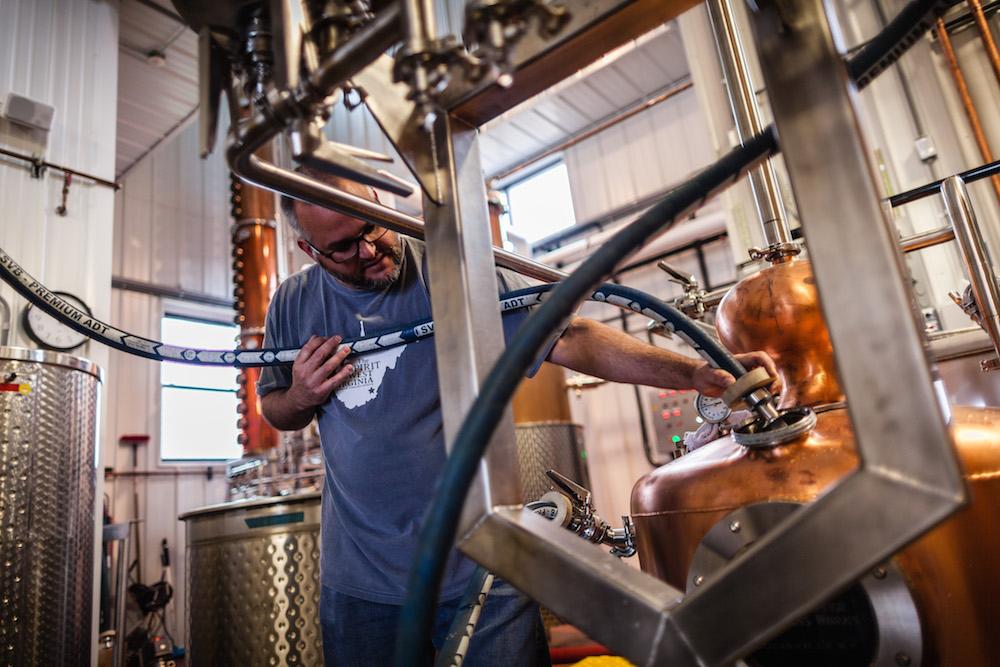 What is really nice, is that even if I reached out to the production guys from the major producers, they were wonderful and very helpful. And that’s what I did.

I had some yeast problems early on that neither the yeast supplier nor the yeast nutritionist knew the answer to. So the next thing I know, I’m talking to a guy in Canada who makes a thousand times as much alcohol in a day as we produce in a year. And that’s a really wonderful thing that happened.

What is really nice, is that even if I reached out to the production guys from the major producers, they were wonderful and very helpful. And that’s what I did.

We also work with a couple of consultants, one of them is Larry Ebersole, who was the Master Distiller at Seagram's for 25 years. He’s helped us refine some of our techniques and increase the yield. He’s also one of the people we send samples to on a regular basis to ensure that our products are indeed the quality we want them to be.

Some of your products are sold under Smooth Ambler Old Scout line. Why is that?
Old Scout products are spirits that we didn't produce ourselves, but sourced elsewhere. That happens a lot in our business, but we’re the only ones that have been very honest about that from the get go. We go and buy a Whiskey, blend it and use it, but once it’s gone, it’s gone, that's the only problem. 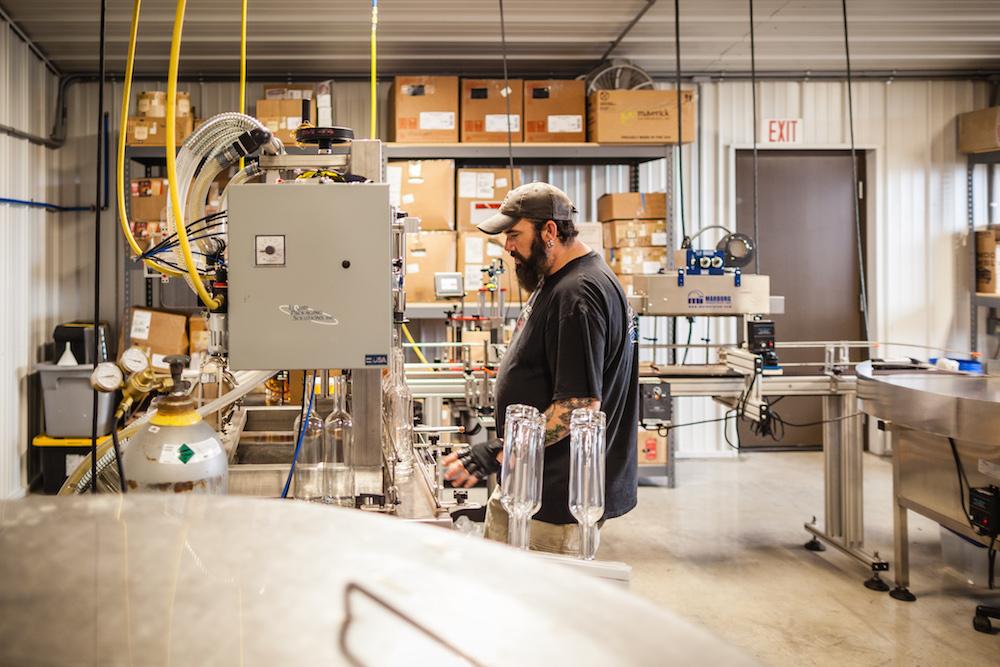 Old Scout Bourbon is very high in rye and I really like that. That was interesting, not only because it was good and we thought we could sell it, but because it’s different from what we make and from what’s on the market. It's on the edge, very different, but still recognizable.

Occasionally, you’ll see a little bit of flock in our Rye Whiskey, because we don't filter it. It’s fatty acids coming together. This leaves a big creamy mouthfeel when you drink it.

Old Scout 7 YO Rye Whiskey, that you are selling at Flaviar was made in an old Seagram’s facility. It is high proof and bottled at a mature age. We don’t filter any of our Whiskey to leave it as close as possible to the original product that the distiller made. This makes it a wonderful Whiskey; it has oils and fatty acids - occasionally, you’ll see a little bit of flock, it’s all the fatty acids coming together. A big distiller would get rid of those with chill filtration, but we leave them. This leaves a big creamy mouthfeel when you drink it.

When not busy with the distillery, you like to fish. Have you discovered any good fish & spirits pairings?
I grew up in North Carolina, so fish for me is fried. It would be battered in a mixture of corn mill and flour and I would enjoy a Bourbon neat on the side.

Another thing I do on a regular basis is use our Gin in a game meat marinade.

Catch some trout, fillet them, fry them up and enjoy a glass of Bourbon on the side – that’s pretty much what I would pick over something fancy.

When we go to the bigger cities, I love a good specialty cocktail by a professional mixologist - one of the best drinks I've had was an Old Fashioned that was run through a slow drip coffee filter.

But when it comes to me, I experiment a lot with production techniques, products and blending, but I don’t really go home and make different Martinis. In the summer time, we like to make Arnold Palmers, tea and lemonade mixed together with ice and we add Bourbon to it.

What awaits Smooth Ambler in the future?
We just went through our third expansion and our production is now at about 80 barrels of Whiskey a month, which is not many compared to the big producers and a lot compared to the small ones. So we’re at a nice medium size now, and we work two shifts a day. We expect the next couple of years to be really good for us. 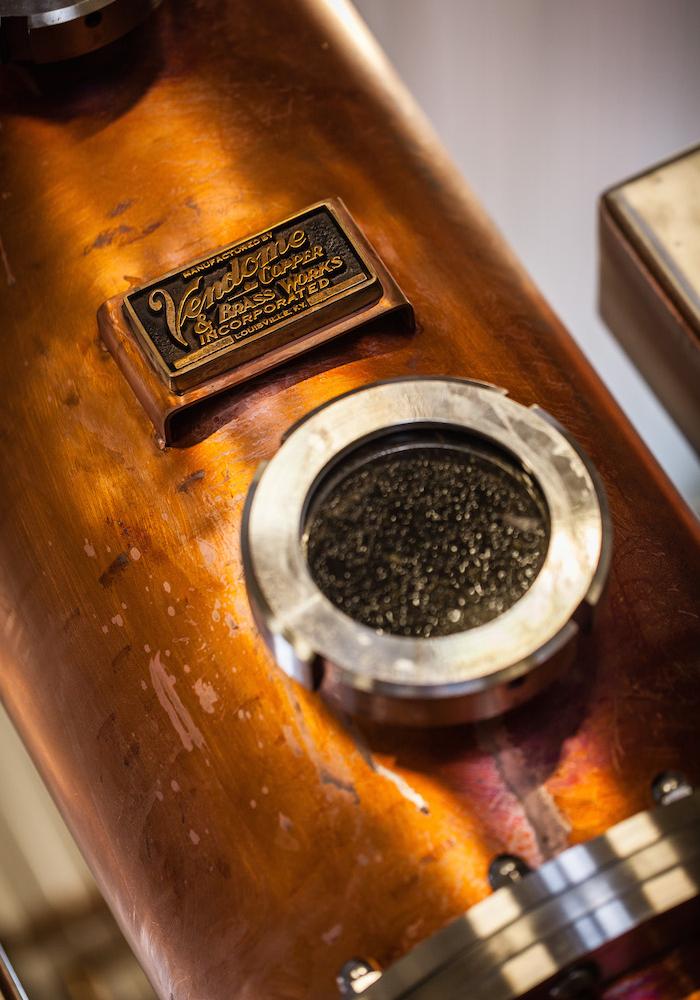 Our 5 and a half year old Whiskey that we first started working on will come out this fall. But there will be very little of it, because our production was small in the beginning.

We’re still trying to find interesting Whiskeys for our Old Scout line, although it’s getting harder. We’re also doing some unique things with blending and that’s where I really want to go. I love combining different Whiskeys together and seeing what comes out of it. These products are unique and others cannot replicate them.

I love combining different Whiskeys together and seeing what comes out of it.

We sell to the US and Europe, including the UK and Germany, and a tiny bit in Japan. We would like to keep our existing markets (EU, US and Japan) and further expand our business there.

And you can bet we'll help them spread their Whiskeys around the globe.