Fearless and Admired: Channeling the Spirit of Josephine Baker with Sephina 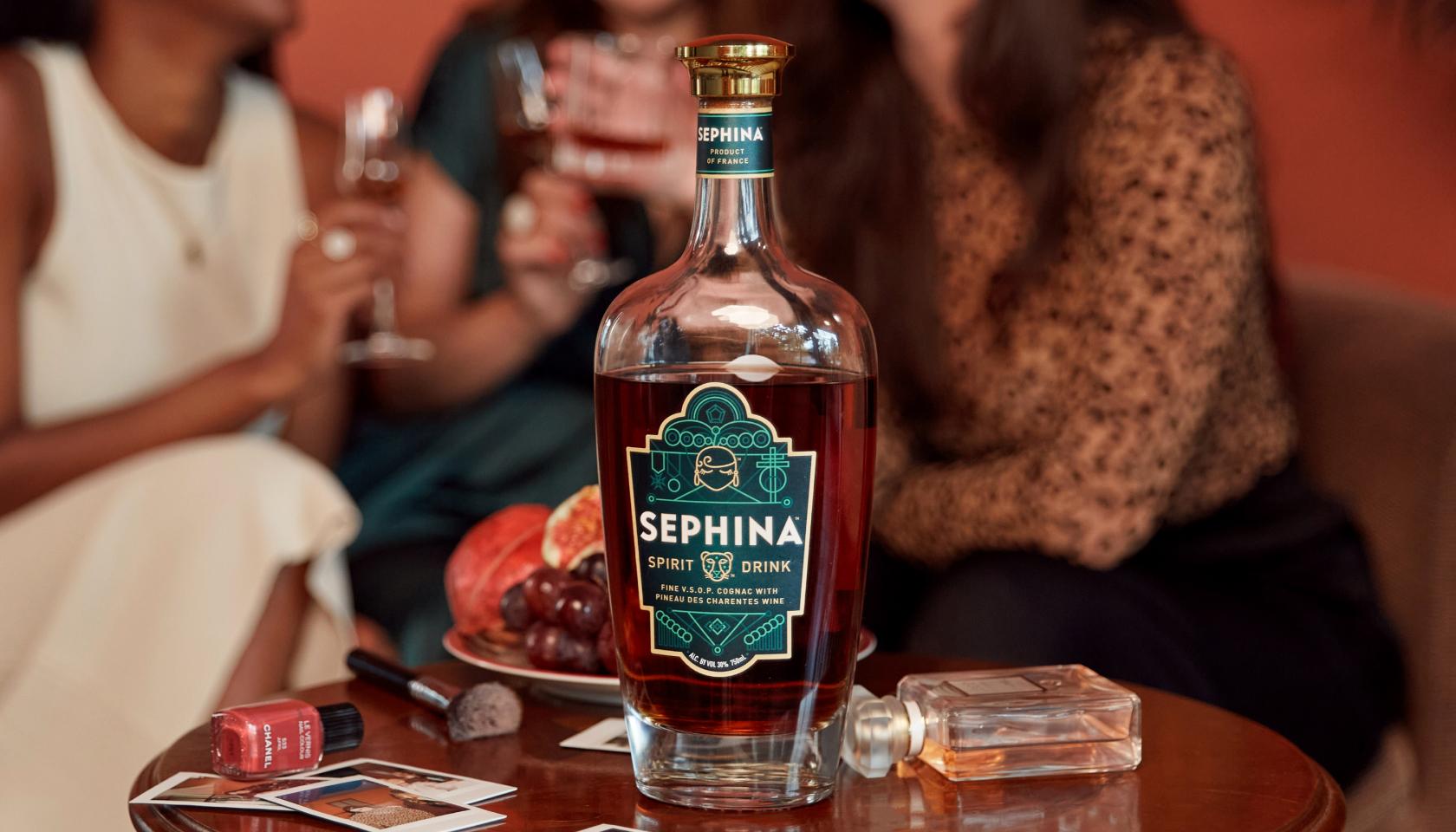 A performer, a civil rights activist, an Allied spy during WWII, a decorated citizen of France, and the first Black female superstar—Josephine Baker was larger than life. That’s why her spirit continues to inspire to this day. And it’s what inspired Ken Gilbert to channel her spirit into a drink that will help keep her legend alive.

Sephina is a craft Spirit blend of 56% V.S.O.P. Cognac and 44% Pineau Des Charentes fortified Wine, produced at a family distillery located in the heart of the Cognac region in France.

It’s a luxurious concoction one can whip out at any time to infuse any occasion with a touch of 1920s flamboyance. But, as Ken states, it was also made to inspire a new generation of strong, fearless women to unleash their full potential and take the world by storm. We sat down with Ken over a glass of chilled Sephina to talk about how the spirit of Josephine Baker encouraged him to venture into a new Spirits business.

When did you know you wanted to start Sephina and what was the main motivation?

Ken: I knew in the middle of 2017 because I was maybe about six months before leaving VOSS because I committed to them until the end of 2017.

But I had no intention of retiring and it was still an idea that was very strong in my head, and I thought it had a good chance. That's when I really said, “okay, it's time to start spending some money to make this thing a reality”. What do you think is the most important part of being the founder of Sephina in one sentence?

Ken: The ability to be able to create something that gives people pleasure.

You need to be fearless if you're doing a new product.

What's the most valuable lesson you've learned while working?

Ken: That's a tough one for me. You don't learn a lot of lessons when you’ve had, you know, a career as long as mine. But it just reinforced what I always knew: you have to surround yourself with good people with good ideas because it's impossible to do something like this alone.

Who is your inspiration and why?

Ken: Well, Josephine Baker was my inspiration for this. She just represented everything terrific about a human being: she was creative, exciting, exotic, committed, talented, innovative, and fearless.

That's what inspired me to do this in the beginning, because you need to be fearless if you're doing a new product. And she really kind of dragged me through the early stages of this. What do you do when you're not around fine Spirits?

Ken: I collect art and go to concerts. And I also like to throw dinner parties, where people laugh a lot and tell good stories.

1) If you could have one superpower, what would it be?
Make the world peaceful.

2) How would you describe Sephina in three words?
Luxurious. Exotic. Satisfying.

3) What are five favorite bottles of Liquor in your home bar?
Sephina, of course. Brugal Rum. Patrón Tequila, kind of standard but I think it's a very good product. Laphroaig because I love really peaty Scotches. And good ‘ol Stolichnaya, because it's always there.

4) What would you eat and drink for your last supper?
It would be a seafood tower, a big one.  What would I drink with it? Well, I would probably, if it's the last supper, try to get drunk. So, it would be a variety of things. While I was waiting for it to be served I probably would have a Dirty Martini. And then once it was served I probably would have Sephina and soda over ice with a wedge of lime, very simple. And as I work my way through the tower, I probably would switch to a Sancerre. And then I would probably finish with some Bourbon shots.

5) A genie tells you to pick someone to share a drink with, dead or alive, real or fictional. Who would it be and why?
Oh, come on, that's easy. It would be Josephine Baker. Because she was such an incredible human being. The other one would be Miles Davis. Except Miles would not be necessarily easy to talk to, because he never was. I encountered him many times when I worked in a jazz club. Occasionally he might smile and say a couple of words. But most of the time he didn't want to talk to anybody except his band members. Miles would actually probably be more engaging if Josephine was sitting at the table.
Smartass Corner note: Sancerre is a crisp, high-acid, easy-drinking French white Wine made from the Sauvignon Blanc grape variety and produced in the area of Sancerre in the eastern part of the Loire valley, southeast of Orléans.

Please tell us more about Sephina as a brand and as a product.

As a product, it's kind of a hybrid because it's a blend of two popular tastes. Cognac is obviously a very, very vibrant category or a segment in the category. What would you say to someone who is who doesn't yet know Josephine Baker and why they should know her or why she was so impactful?

Ken: Well, if someone said they didn't know Josephine Baker, I’d give them a pass if they were under the age of 30. But otherwise, I’d say you should go find out something about her because you'll find her story inspiring and it could impact your life the way it impacted mine.

What's the craziest anecdote behind the making of Sephina that you're willing to share?

Ken: Oh, in the earlier stages of experimenting with different types of formulations, I was at my house on the vineyard and I had a neighbor who was renting a house and happened to be good friends of ours when we were back home in New Jersey.

Smartass Corner note: Martha’s Vineyard, an island located south of Cape Cod in Massachusetts known for being a popular place among Presidents (The Obamas and The Clintons, Jackie Kennedy owned a home there) and celebrities (Oprah, Winfrey, Princess Diana, Bill Gates, Spike Lee). They were at our house for a dinner party and they drank everything that I had. They loved the formula at that point which was a blend of ruby red Port and Bourbon.

And I’ll never forget the neighbor knocking on the door at about one o'clock in the morning. She was still pretty drunk asking me if I had any more of that product, which at that point in time had no name yet, saying that she loved it so much.

The next day I said to her husband: “What the hell? How do you let your wife out at one o'clock in the morning knocking on people's doors drunk asking for more alcohol?”

Imagine the perfect evening with Sephina. Who are you sharing it with? What are you eating? And what's the soundtrack to it?

Ken: It would be any number of close friends, probably a small dinner party of six to eight people. It would be outside. In the summer evening. I'd be serving probably some type of red meat, most likely steak and corn and salad, very summery. And the soundtrack is Miles Davis’ In the Silent Way.

What are your top three tips for hosting a successful dinner party?

Ken: Great food. A wide selection of Liquor. People who are lively and smart and know how to tell good stories, and are not opposed to laughing at a lie just because it's funny. And good music—you know, one that everybody likes, generally it's jazz. Most of my friends like jazz and those who don't tolerate my love for it.

What would you say to someone who's not familiar with Sephina to get them excited and passionate about exploring or trying it?

Ken: I would say think of your warmest and your richest Spirit experiences of the past and combine them as one and imagine what it might be like to experience. What's the most exciting upcoming project you're working on?

Ken: It's the Sephina 2.0. I don't know if we can say this as part of the interview, but that's the most exciting thing that's going on. I mean, the work that's being done to evolve the brand is incredible.

I see Sephina making a difference in the lives of women.

Our plans to hire a black female CEO, I've had that dream for three years. And now it's going to happen. In general, Sephina is the most exciting thing that I do, because it's the combination of a dream.

Where do you see Sephina in the next 5 to 10 years?

Ken: I see Sephina fulfilling its mission of making sure that the legend of Josephine Baker is not forgotten. But also fully understood because I don't think that she's as understood to the extent that she's as complex and as incredible as she is. I see Sephina making a difference in the lives of women, not just black women, but women in the Spirits industry. I see it being a brand that's admired. And hopefully, have something some kind of major event that makes the people who invested in it happy.

What are some examples of modern-day celebrities or modern-day women who you think were influenced by Josephine Baker?

Ken: Janelle Monae. Probably Patti LaBelle. Beyonce. Vonetta McGee, who most people won't recognize but she was, you know, one of the great beautiful black actresses of the 70s who was really talented.