Published in:
By Peter Holland
Aloha! Before we start, I need to make a ‘thing’ clear. Rum and Tiki have a link, but these two subjects can happily exist quite independently of each other. In a word, proper Tiki is all about escapism, and of course, we all know Rum is awesome. But I don’t want to perpetuate a misconception that Rum depends on Tiki, and vice-versa.
Rum and Tiki have the strongest connection from some of the most famous of libations in history, and I reckon there can’t be many people – non-drinkers included – that haven’t heard of a Zombie or Mai Tai, right?

So why is this? Well (fortunately) one of those lovely quirks of fate brought Donn Beach (a.k.a. Don the Beachcomber or Ernest Raymond Beaumont Gantt as he was originally known), and a post-prohibition excess of Rum stock come together in the most amazing way.

Don the Beachcomber was something of a visionary, he combined a massive sense of theatre with a new wave of cocktails that were as complex as anything that had gone before, if not more so. Donn Beach had travelled the world, and while the myriad jewels of the Pacific and Polynesian culture formed the backdrop, his time in the Caribbean, Jamaica specifically (as I’m thinking of the Planters Punch cocktail) influenced his drinks.

A post shared by Booze, Tunes, Flicks and Food (@boozetunesflicksfood) on

Donn realised that the different styles of Rum could be combined to create a complexity that wouldn’t be easily achieved from using a single Rum. Donn liked to blend varieties of the key components in a Planters Punch, and that’s how we end up with something a magnificently complicated as a Zombie.

Donn used the Planters Punch as an inspiration for many of his drinks, and “what’s a Planters Punch?” I hear you say. Well let’s consider a basic punch, and the rhyme you can use to help memorise the starting point:

These basic proportions are there to be tweaked in terms of your personal preference, but frequently surprised how well it works off the bat.

Sour is your citrus component, but there’s no need to stick to lime. How about lemon, grapefruit or orange?

Sweet, yeap that’s the sugar! But once again, why not consider a flavoured sweetener such as grenadine, orgeat, falernum or orange curaçao?

The weak could be fruit juice, or it could be water either through straight addition or from the dilution arising from shaking with ice. Fruit juice is also sweet and sour, so easing back on one to compensate the other makes sense. 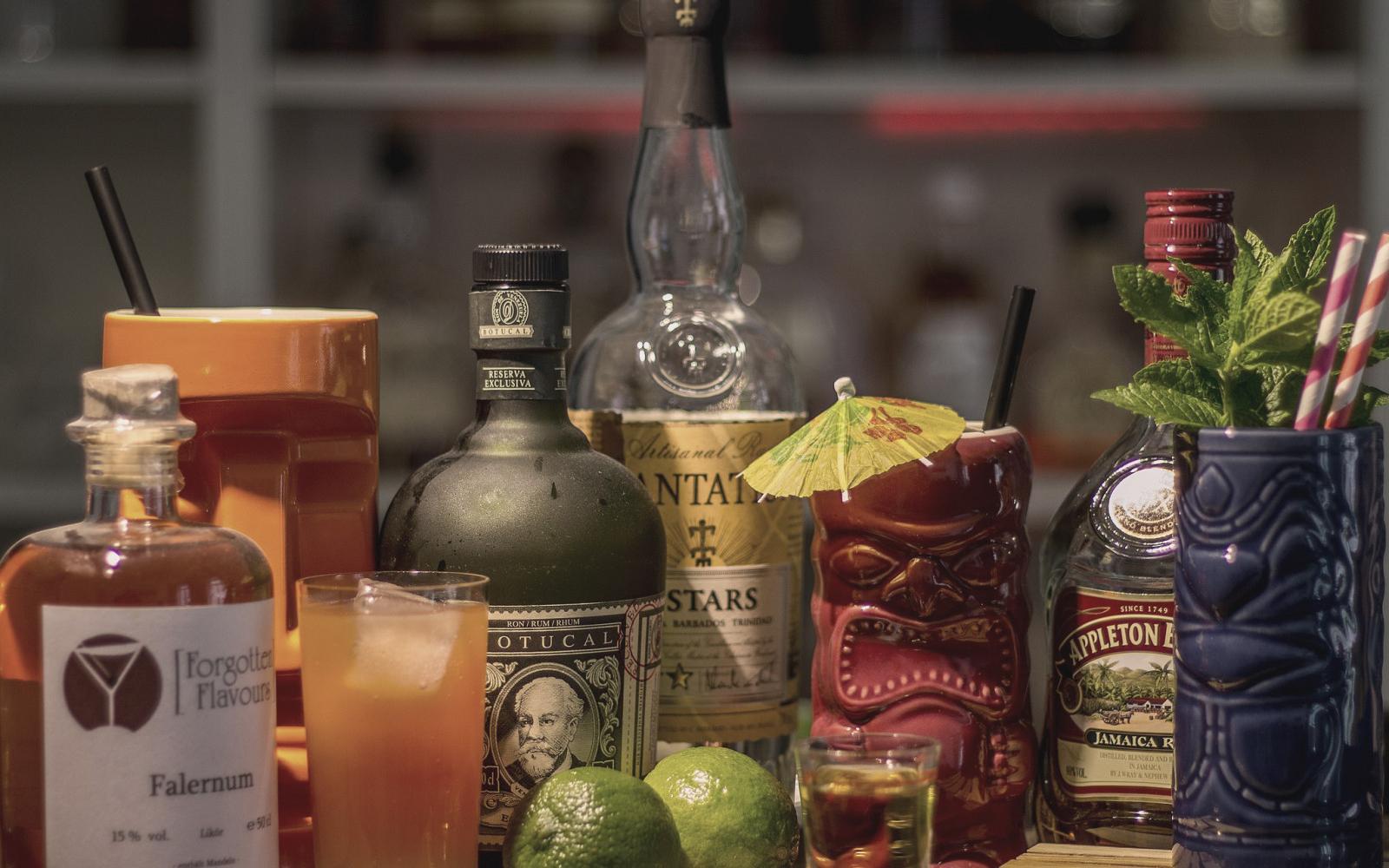 So how about blending a nice robust Jamaican Rum, with a lighter Puerto Rican or Cuban one? How about combining some of the vibrant grassy, fruity notes of an unaged Agricole Rhum as well. Some of the more robustly flavoured Rums will have a greater presence in the cocktail, so might be given a smaller share of the ‘strong’ in comparison to the lighter Rums.

Take a peek at the specification for the 1934 Zombie as detailed in Beachbum Berry’s Total Tiki app – an essential part of any Tiki-interested persons life – three Rums called for gold Puerto Rican, brown or dark Jamaican and a 151 proof Demerara.

Three Rums with different characters, and because we can trust Beachbum to not specify Rums that are unaged and have simply been coloured, we can trust ourselves to make the following assumptions.

Puerto Rican – Light to medium aged, multi-column still Rum. Light in character.
Jamaican – A medium to long-aged pot still only, or pot and column blended Rum. Medium to heavy weight Rums flavour-wise.
Demerara – Typically a heavier character Rum, one that might not have been aged for very long, but when presented at higher proof offers a distinctive richness.

So, you might wonder why put some of the Puerto Rican in, when on paper it can get lost in and amongst the heavier Rums? Well, sometimes you need to ensure the cocktail is a certain strength, and the Zombie is famously a heavy hitter in that regard.

But also, if you go all in with heavy Rums, you don’t allow the other ingredients to express themselves to their fullest. It’s all a balance and Don the Beachcomber was a master of this. Using the Gargano Classification to understand Rum means you’re in a much better position to understand the characteristics and how they apply to Tiki cocktails.

A post shared by Ollie Vee's Tiki lounge (@ollieveestikilounge) on

Any bartender that offers you a Zombie based on Bacardi (white) and Captain Morgan (dark) Rums hasn’t really understood the notion of blending, and even what the cocktail should aspire to be. I’d refuse it, and order a Beer instead…

Well, during prohibition Rum was one of the more easily available spirits given the proximity to the Caribbean, and lots of it found its way into ‘dry’ America. Once the noble experiment was consigned to history though, all those booze-starved drinkers wanted to go back to the Gin and Whisky that they had been missing out on, and as a consequence vast stocks of Rum built up meaning that solid quality products could be bought cheaply.

The day that put rum-runners out of business during the prohibition era. #RepealDay

A post shared by Kirk and Sweeney Dominican Rum (@kirkandsweeney) on

Donn knew the differences in production style and what they could bring to a drink, and (to the best of my knowledge), nobody had done this before. Nobody would seriously consider blending three Vodkas or three Gins together, and while it’s possible that blending different types of Whisk(e)y together would yield a more complex result, it’s something just hasn’t taken off. So Rum still commands the stage as far mixed drink potential goes!