Home Bars of Flaviar Stars: From New Jersey to Vienna 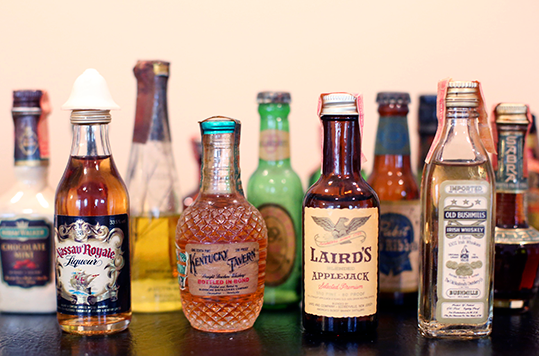 Spirits cabinet, Home bar, Liquor shelf, whatever you call it, is a holy grail of every home. Three Flaviaristas stepped forward to show us theirs, so we’re peeking through their bottles today.

Who’s up first? We can’t see him? Aaah, we need to look more closely – it's a collection of miniatures from the Garden State. Whilst spirits usually do their ageing in casks, these have been “aged” for a few decades on the shelf of our Flaviarista Justin.

His father started the collection years ago – probably already during WWII while fighting against the Japanese in the South Pacific as a member of the US Navy. Maybe this is where that peculiar bottle of Japanese Vodka came from… 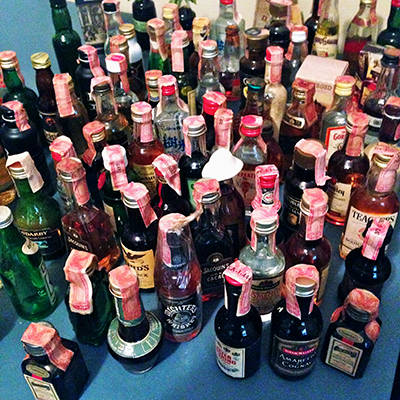 Justin and his father would buy a new mini bottle every time they went to NYC, as for a while they used to be illegal in New Jersey. Up to now, the collection has grown to over 200 bottles, many of them being around half a century old.

One of Justin’s favourites is a very old bottle of Kentucky Tavern Bourbon in Bond with the tax stamp.

These miniatures are not for drinking, they’re an impressive collection to keep and develop. But fear not: you won’t be empty-glassed in Justin’s home – there’s a handsomely-stocked bar of full size bottles in the wings.

To kill a Tequila

This particularly well-stocked bar can be found in a private home in the Austrian capital of Vienna. The owner’s favourite tipple? “Rum! The majority of them come from Latin America. I like the sharper, spicier Rums paired with cigars.”

Our eagle eyes picked out a few Whiskies in there, too. He used to prefer Scotches, then added some Irish Whiskey, and most recently acquired a few nice Bourbons for his collection. Lately he stumbled upon Japanese Whiskies (yes, indeed, Flaviar might very well have had something to do with this…) and is planning to explore them further. 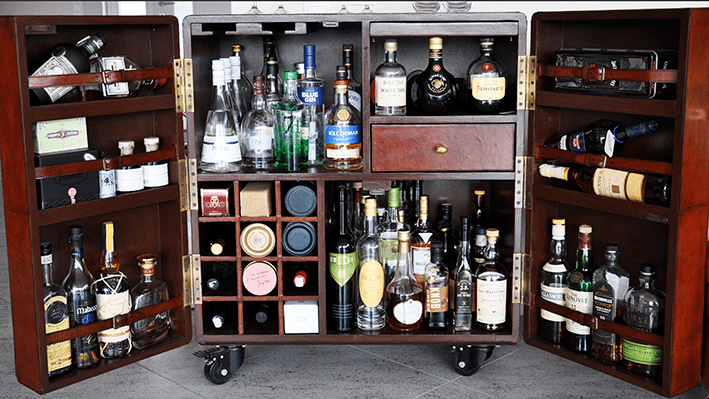 Another recent discovery for Flaviarista number 2 is Gin, that he likes to drink either neat or mixed with a good tonic. And do our eyes see Brandy? “In this part of the world it just doesn’t go without a good home-made Brandy – apricot and pear Brandy and a few Italian Grappas can all be found in the bar.”

One problem with the bar cabinets is that they always tend to be too small, so there's a whole treasure trove of further bottles kept in the basement. However, there’s one spirit that can’t be found in it: Tequila. “In all these years I have not yet found one that I would want to have at home.”

Hmmm, not sure we quite buy that one… Any Tequila recommendations that might make him change his mind?

Ahoy, Cap’n, and I think I can see a Rum stash!
Far from the tropical breezes, in the tiny land of Slovenia, there’s our third Flaviarista BlaÅ¾ with a lovely selection of Rums in his bar that any seafaring pirate would be proud of. And it’s been quite an intense love affair – in just a short period of time, his collection grew to 14 bottles of Rum from 11 different countries.

The main reason this imbiber specialises in Rum is… wait for it… that he doesn’t really like Whisky.
Whaaat???! Scratch that, we’re not seriously writing it!

Alright, it’s *also* that the Caribbean is BlaÅ¾'s favourite winter destination and it’s hard to find any other alcohol there other than Beer and Rum.

Despite this limitation, with every island having at least one local distillery there are many different Rums that a poor fellow might have to taste when island hopping (terrible life, right?). So, when the vacation is over, he buys his favourites, safely wraps them in his sandy towel and off they go - back home. 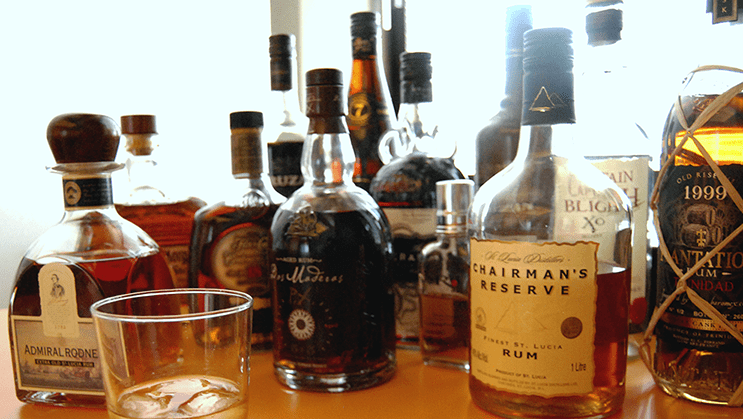 Working in advertising, he’s not immune to beautifully designed bottles and labels, but he looks at what’s inside the bottle first and foremost. So far, his favourite bottles in the collection are R. Rhum from St. Barth with a somewhat higher price point, but “I loved it so much that it simply had to come with me, even if only in the small 1dcl bottle. Dos Maderas PX 5YO + 5YO is one of my dearest, too.”

For those times that he can’t make it all the way to the Caribbean, he enjoys what Uncle Flaviar has to offer. “Captain Bligh was one of my first real Rums that I encountered at Bequia Island and I was really happy to see it at Flaviar. I like to drink Rum from my collection with some ice and in the Caribbean I also like to have Cuba Libre or Piña Colada. Since I love good Beer as well, I mostly save Rum for a special occasions or for the end of a hard day, paired with relaxing music.”
...aaaaah, almost feels like we’re sitting in the Caribbean…