Thinking outside the box is a hell of a lot easier when you don’t know that you’re in one.
At least, that’s the thinking behind New Holland’s wildly forward-thinking brews and Spirits. The Michigan-based brewing company took the craft Beer industry by storm in 1997 and quickly grew to include two restaurants and a distillery that’s pretty proud of shattering the industry’s expectations. After all, when you’ve been firmly pegged in the Beer brewery box, the sky’s the limit when it comes to your distillery dreams.

That’s the thinking behind New Holland’s Spirit line and its director of distillery operations, Brad Kamphuis. We recently sat down with Brad and picked his brain about all things New Holland, but especially their classic Dragon’s Milk, Beer Barrel Bourbon and… experimentation. With booze. This is a PG-rated blog post, people. 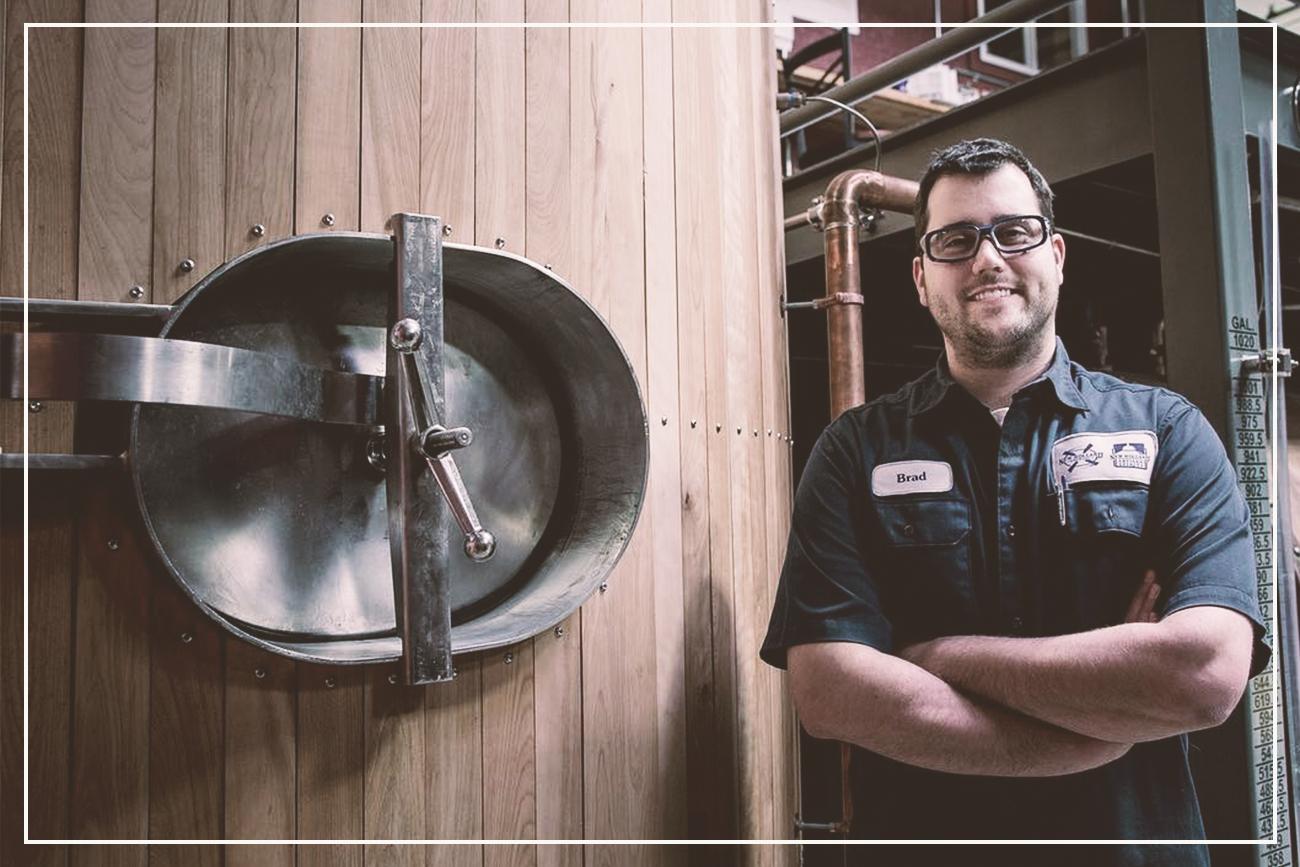 Flaviar: Okay, we’ve come across our fair share of Beers from all around the world, but we’ve never come across a Beer with a better name than Dragon's Milk. What’s the origin story behind the name?

Brad: Dragon's Milk has been the driving force for the brewery since 2000. I don't even remember when the first batch was brewed, but it came out as a very limited and small quantity—it was a very special Beer. It was for a celebration. It was intended to be for a big occasion, the pinnacle of the year.
I’m not sure which culture this stems from, but basically, when you slay the dragon, you have the right to drink the Dragon's Milk. That’s the reward, that's your trophy.
Dragon’s Milk is a Beer that was brewed with the intention of barrel aging. That’s not the case with a lot of barrel-aged Beers.
As time has gone on, Dragon's Milk has evolved to mean the best liquid you have in the house. It’s that special bottle you have up on the top shelf or hidden away that you don't let just anyone drink. So that's really where Dragon's Milk comes from. The Beer itself is really big. I don't know if you've had it, but it's an 11% Bourbon-barrel-aged stout, so it's black. It’s very, very dark and rich, with lots of roasted notes. It’s brewed to complement some of those Bourbon flavors. It's a very interesting Beer on its own, and once it comes out of fermentation, it would normally just go into a bottle, but this goes into the barrel instead.

That Beer that you taste coming out of fermentation is missing something—it's not bland, but it's definitely missing half of its flavor profile. Dragon’s Milk is a Beer that was brewed with the intention of barrel aging. That’s not the case with a lot of barrel-aged Beers.

1. If you could have one superpower, what would it be?
I've always been on the flying side. Flight. Peter Pan, man.

2. How would you explain the New Holland Beer Barrel Bourbon in three words?
I'd say new. I would also say balanced and maybe crushable because it is just a very... your glass is empty quickly.

3. What is your favorite music and what drink goes with it?
Pearl Jam. I'd probably say PBR, honestly.

4. What would you eat and drink for your last supper?
A giant steak and probably a Dragon's Milk.

5. What's your second favorite Whiskey? Assuming that the one that we've been talking about for the past 35 minutes is your favorite.
I guess I'd have to say Maker's Mark at this point, just because it’s what I have had the most of in my life. I tend to like Maker's Mark.
Flaviar: You mentioned that Dragon’s Milk was intended to be aged in Bourbon barrels. Which means you probably felt that Beer and Bourbon were a perfect match from the start. Why?

Brad: That's a good question. Whiskey is a highly concentrated flavor. In the distillation process, you're continually condensing those flavors into a very intense profile and the Beer we use features a lot of malt. There are numerous different types of malts we use, but just the sheer quantity of malt that you need to make Dragon's Milk, we figured that this Beer and Bourbon are two powerful flavor profiles that work really well together.

Flaviar: When you created the first batch of the Beer Barrel Bourbon, did you have a specific flavor profile in mind? If so, what was that flavor profile?

Brad: Yeah, it was definitely an experiment. Beer barrels in the Spirit category are picking up steam. Watching Dragon's Milk grow as a brand has presented some challenges but also some opportunities for us. For example, we got to a point where we were making a lot of Dragon's Milk. We were filling hundreds of Whiskey barrels with Dragon's Milk. After they get emptied, we had a lot of barrels taking up space—we were waiting on trucks to come pick them up just to get them out of here. We were selling them at 20 bucks a piece to local residents that just wanted a Whiskey barrel. 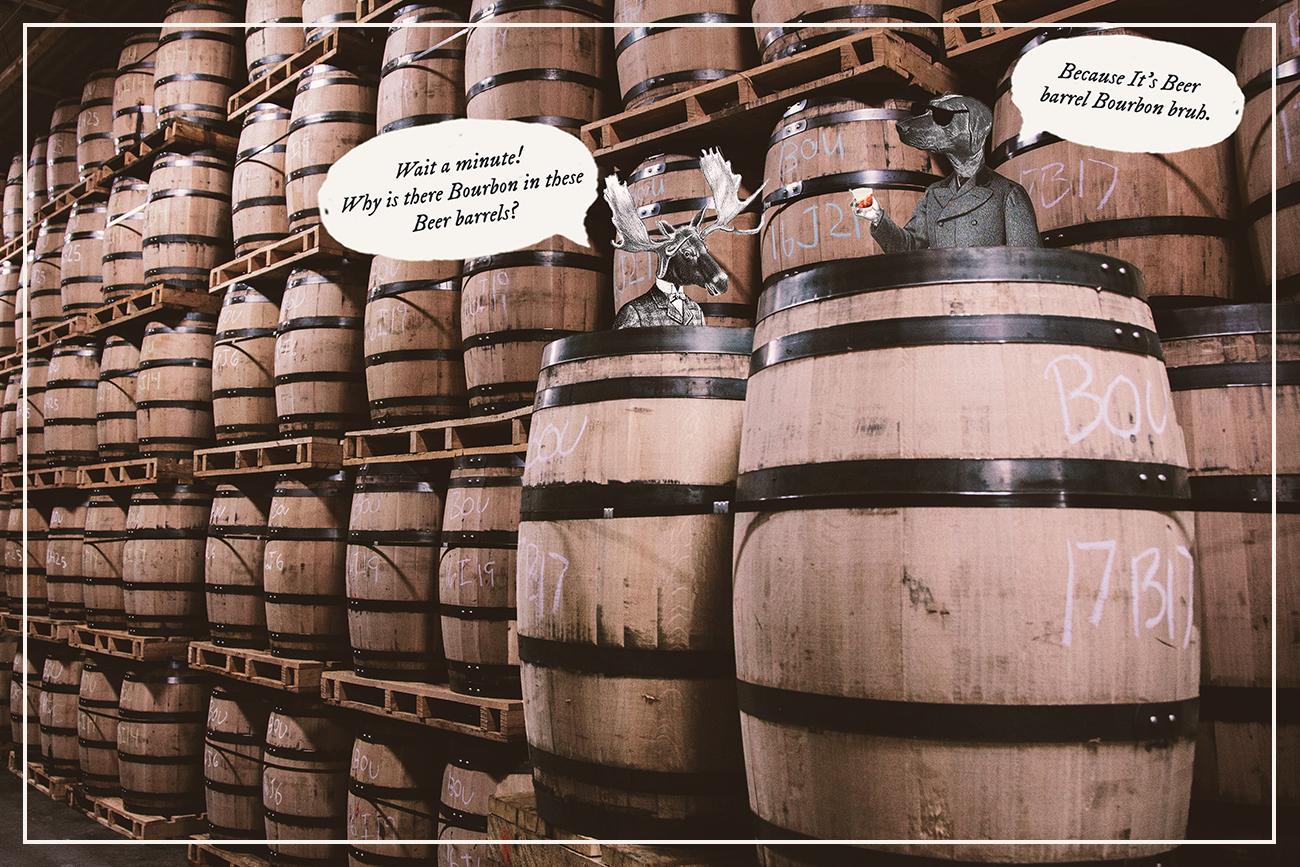 The malt sugars being the Beer profile of a stout—roast-y with some coffee and burnt sugar. All those flavors that you get from drinking a stout were showing up in the Bourbon. And what that was doing was softening the Whiskey, really sanding off some of those rough edges that you do get with American Bourbon. It was a nice evolution, it was fun to see. As soon as those first barrels were emptied and tasted, we quickly changed our production focus in the distillery.

At that time, we were making a lot of malt Whiskey in the distillery because we were brewing—it's very easy for us to process malt and make it into Whiskey. So, we immediately changed our focus to producing a lot of our own Bourbon. That brand really took a few years to get up and moving, but that was back in 2012. Today, Beer Barrel Bourbon is 100% New Holland-made and we're proud of that. But it took a lot of effort at the distillery, shifting our focus away from malt Whiskey and pushing that all into Bourbon in 2012 and 2013. 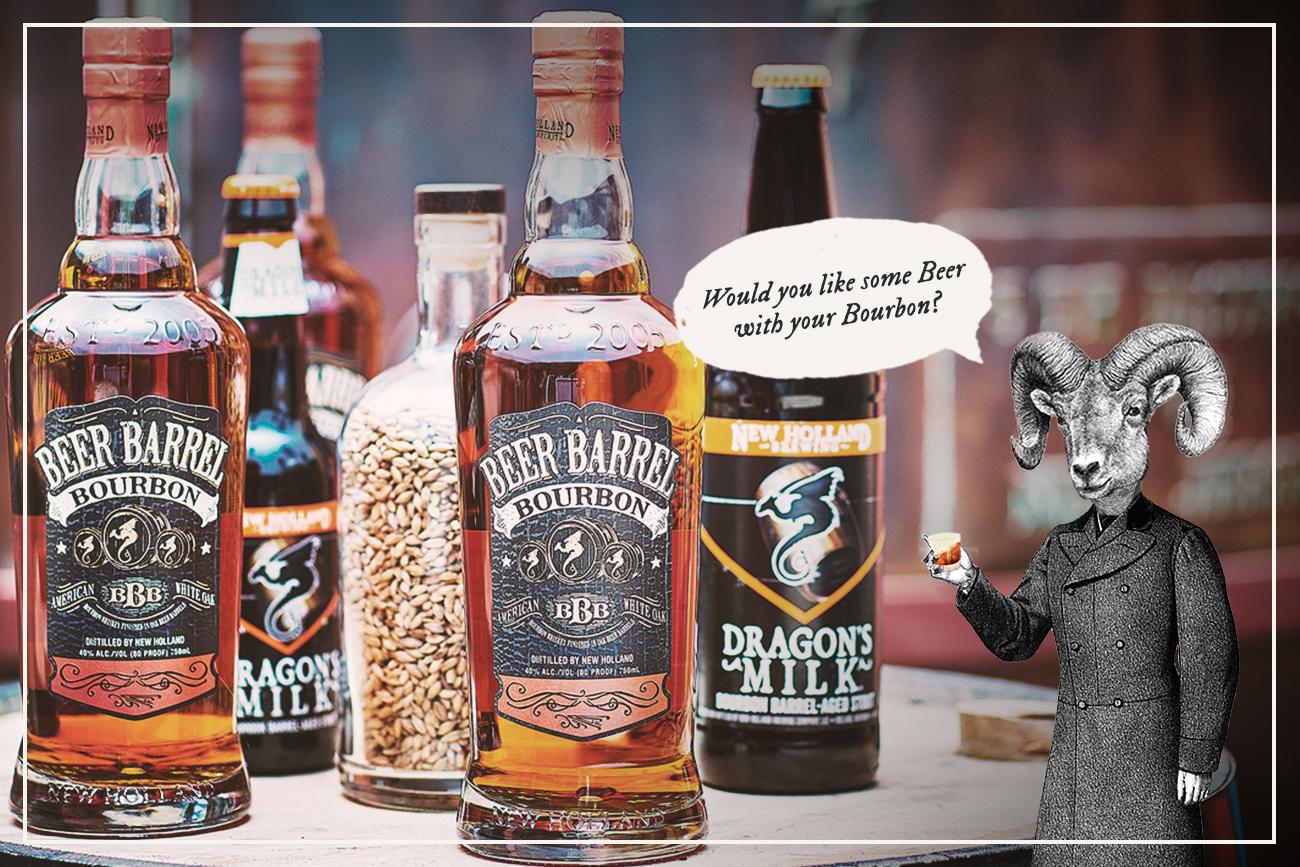 Brad: That is a good question. Any time you're pairing complementary flavors together, it's always a challenge. You can take flavor X and flavor Y and make something really awful. But there's so much good Beer out there that's being aged in barrels that have coffee in them or vanilla beans— they're all things that weren't available before.

Dragon's Milk is the most widely distributed, highly available barrel-aged Beer across the country right now. So we are very comfortable filling and emptying barrels and putting different Beers into them. That's very easy for us to do. We are experts at that. The Whiskey side makes it difficult. What kind of Spirit can I pair with these Beers? It takes so long to make a Spirit. It's a very slow-moving process. But we've dabbled. We have different malt Whiskey in our maturation warehouse right now that we have put into Beer barrels. We’re looking at creating Beers whose barrels will intentionally be available for Spirits down the road.

Flaviar: When somebody comes to one of your establishments and says, "I have to try this Bourbon. What should I eat with it?" What is your recommendation?

Brad: The drink would obviously be Dragon's Milk—they go really well together. But any kind of dessert works really well. Whether that be ice cream or a fruit-based crisp or a pie. Whiskey and pie are one of my favorite things to eat and drink together. Just focus on the sweet side of things and you'll be fine. Red meat as well, too. Whiskey and red meat are great together. 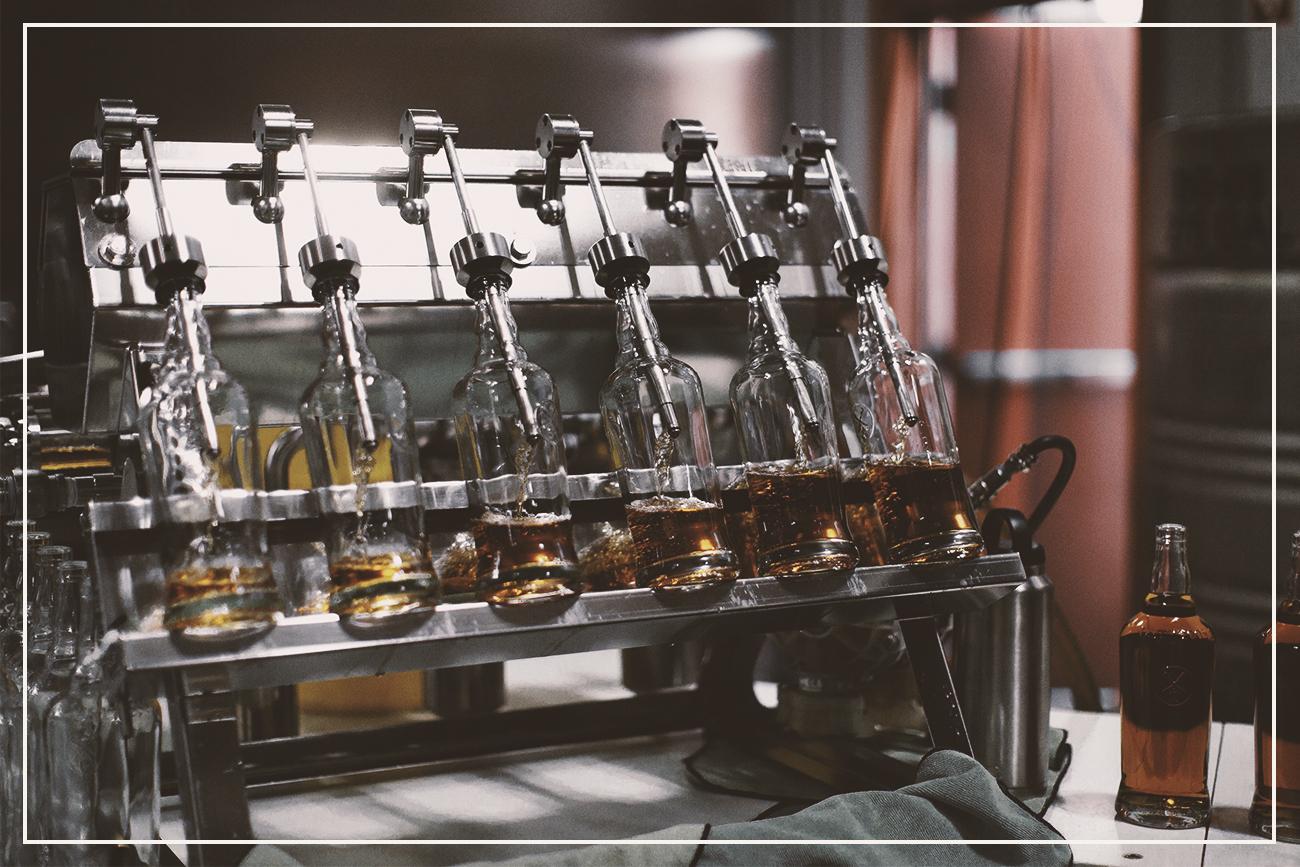 Flaviar: We’ve talked a lot about some of your products and about the history of your company. How did you find yourself in the world of brewing and distilling?

Brad: I was introduced to craft Beer in college back in 2006 and 2007, and I really got into brewing and home brewing. In Michigan, we have a great environment for craft brewing—we have all kinds of amazing Beer on the shelf. I would work my way through all the styles trying to replicate them. Being a local boy, my craft brewery of choice was New Holland. I kept looking at the career pages and seeing how I could get my foot in the door. One day, something popped up—it was a position to be in the distillery as a distiller. And I figured it was close enough—it got me through their doors, learning how New Holland does what New Holland does.

And that was over seven years ago now. I was a lucky guy—right place, right time. I had no background in distillation at all. I had no background in brewing outside of my home garage, podcasts and a bunch of trial and error. New Holland took a chance on me. The first couple of years, I was making Whiskey not knowing what the hell was going to come out of that barrel in two or three years down the road. It was some calculated risk on our part—we had sound principles around brewing, mashing and fermentation, and what some of those flavor profiles were. So, we didn't start with nothing—we had some good ideas of how to do things. I think we will continue to see the brewing community take Whiskey production to the next level because brewers are creative by nature.

But the only way I know how to distill is the New Holland way. I have no previous experience in Kentucky making Bourbon. That’s part of the fun, though. We don't have any preconceived notions on how things have to be done.

This interview was edited for length.
Read more about:
Published Sep 4th 2018
By Jackie Gutierrez-Jones