The Negroni Versus the Gin & Tonic: Which Will Reign Supreme?

Published in:
By Emma
What’s the best way to drink Gin? Well obviously that depends who you ask, and maybe where you ask it, too! As much as we all have individual tastes, drinks preferences and flavour affinities, there are some regional trends for drinks across the globe.
Take the UK; home to real ale, cups of tea and the Gin & Tonic. In fact, England is the birthplace of Gin, which remains it’s national drink to this day (unless you count tea, which of course, we don’t).

In the UK, Gin reigns supreme. New figures from the Wine and Spirit Trade Association show that in 2019, Britons bought a mammoth 83 million bottles of the juniper-flavoured spirit, with gin sales almost doubling in value in just two years. What’s more, Gin has recently been named the UK’s favourite spirit, above Whisky and Vodka.

The Gin craze may not be booming across the pond, but Gin is growing in popularity.

In the US, sales of Gin have been growing, as well, especially super premium Gin which has experienced double-digit growth. This shift in consumer preference from low-cost to imported, premium, craft brands means that Gin is now more popular than ever. The US sits comfortably in the top 10 of Gin consumption by country; with the UK in fourth, followed by Ireland, Canada and the States.

So while both countries consume so much Gin, why are there such big differences in the way that it’s drunk?

Survey results from UK-based website GinFoundry.com show that 67% of people class the G&T as their favourite cocktail, way above the Negroni (10%) and the Martini (8%). While that’s a huge disparity between first and second place, it’s a very different story in the States, where the Negroni cocktail has been popular for years.

Back in 2013, drinks industry magazine Imbibe launched Negroni Week, featuring 120 US bars mixing up their own take on the cult cocktail. It has grown to over 12,000 venues around the world, but this year it is a digital-only event, enabling everyone to celebrate safely at home.

So what makes up the bitter Italian cocktail, and why is it so popular?

To make the perfect Negroni, you’ll need: a rocks glass or tumbler (find out more about the perfect glassware for Gin drinks here), some large cubed ice (ice balls or blocks look super fancy if you want to push the boat out), Campari, Sweet Vermouth, Gin and fresh orange peel, to garnish.

The Gin you go for is entirely up to you - a herbal Gin such as Gin Mare will make a more punchy Negroni, whereas a floral Gin such as Bloom will lift the drink and balance out the bitter flavour of the Campari. Personally, I use Sipsmith because I love a big juniper hit in my Gin drinks.

In a mixing glass (or the base of a cocktail shaker), add 50ml of your favourite Gin, 50ml of Campari, and 50ml of a Sweet Vermouth. Add lots of ice, and stir quickly with a bar spoon for 5 or 6 turns. Pour into your rocks glass filled with an ice block or sphere, and garnish with fresh orange peel, twisting to express the oils in the skin. 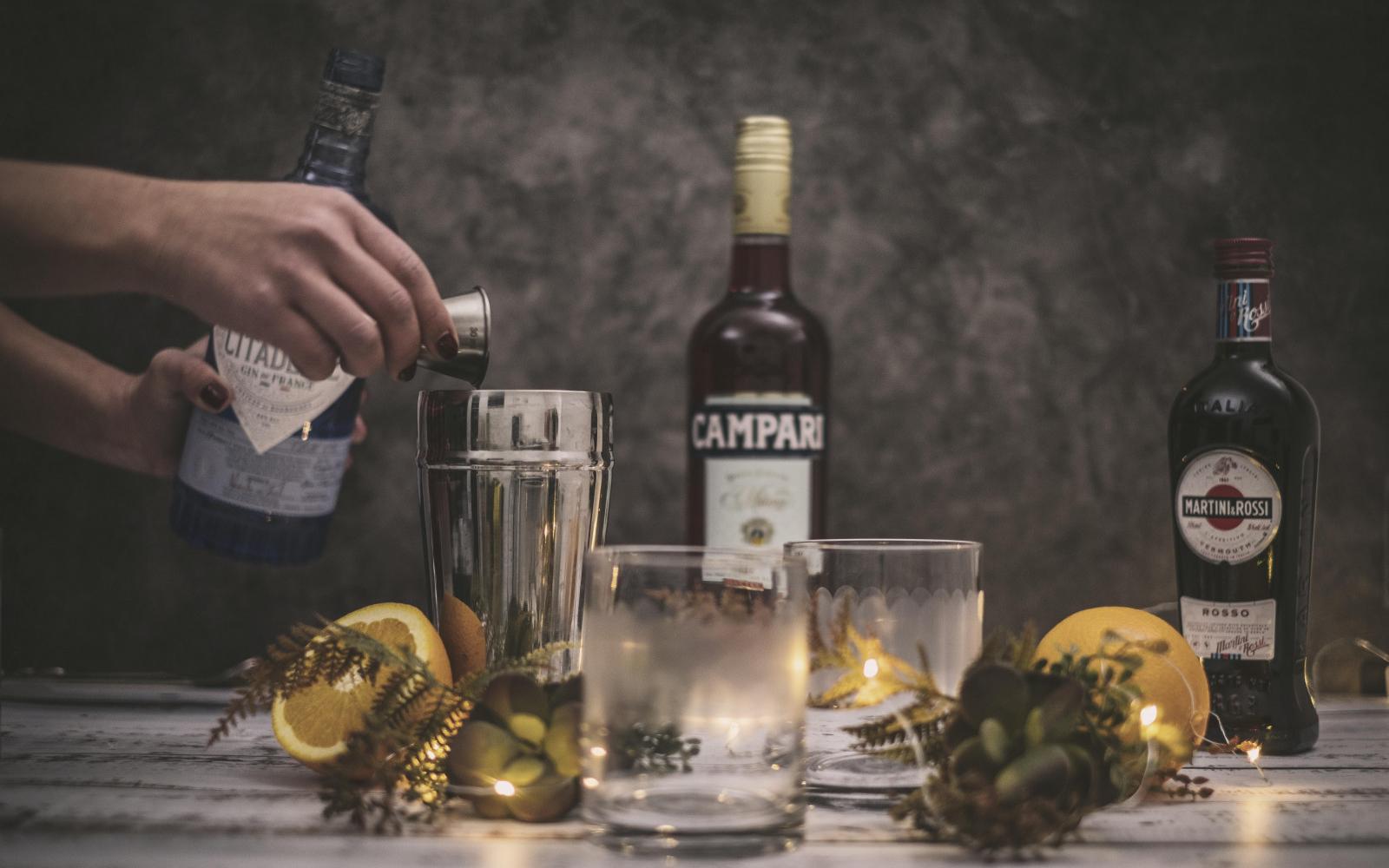 One reason the drink’s so popular? It’s simplicity. With just three ingredients, the Negroni is so easy to make that even the most unfamiliar with mixology will be able to pull this one out of the bag.

But there’s more to it than that. Despite the Negroni being created in Florence in 1919, we have the Americans to thank for its inception. The inventor of the drink was Count Camillo Negroni, a bartender who became frustrated with the American tourists ordering what he deemed to be watery cocktails - namely the Americano, a mix of Campari, sweet Vermouth and club soda - and decided to create his own, much stiffer version.

For almost a century, the Negroni has appeared on cocktail lists all over the globe, and rightly so. The Negroni expertly shows how versatile Gin can be, especially when compared to a G&T.

While it would be remiss of this Gin writer to claim one is better than the other (because quite frankly it’d be like asking me to choose between my parents, or two puppies or something), let us know in the comments which is your favourite - the Gin and Tonic, or the Negroni.
Read more about:
Published May 11th 2018 Updated Sep 15th 2020
By Emma