The Curious Eleven with Luis Hernández

Published in:
By Louise Sinnerton
A fantastic mind when it comes to cocktails, Luis honed his craft at The Eddy NYC, after working in bars and restaurants growing up in Cape Cod, Massachusetts. He moved from Venezuela when he was 12 years old and the country has a huge influence on his cocktails and cuisine.
He now runs Cocktail Illustrators where he styles bars, creates cocktail menus and helps brands develop their own flair for mixing. He’s also Brand ambassador for Santa Teresa Rum, a Venezuelan Rum with plenty of flair - just like him. 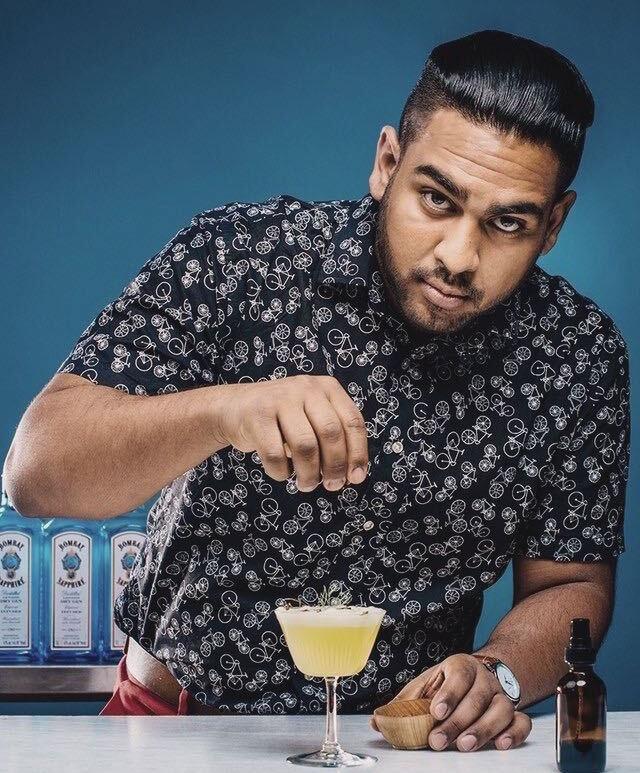 I don’t think I had that one Eureka moment. I started as a dishwasher when I was twelve and hospitality was always part of my life, I would work over the weekends and during the summers. I moved my way through the kitchen and ended up as a Chef. Then my family opened a restaurant and I worked there as a Chef; it was fantastic! I just loved playing with flavors and making people happy with a fabulous meal.

Feeling like you can bring that sense of fun when you have those other skills down helps everyone to have a good time.
One day the bartender didn’t show up and everyone was like “you're doing it I guess.” I was crappily making old fashioneds and just muddling my way through. After that shift the bar manager came back and I asked him to teach me everything. I never wanted to be in that position again. Then gradually my knowledge grew, and my passion for food and drink was equally. Then I realized I wasn’t crazy, and there were other people out there like me, so I moved to New York to expand my knowledge.

I would say the first thing is empathy, that’s not something you can teach but understanding that the guest comes first is really important. Even if someone walks in and it’s their wedding day, they should still leave happier than when they came in.

The second thing would be multitasking; talking and making a drink for example, three would be working clean, four, keeping your knowledge fresh and then five, the ability to have fun. Feeling like you can bring that sense of fun when you have those other skills down helps everyone to have a good time.

I really don’t have one that’s a pain in the ass. To me whatever you want to drink I’ll make it, it doesn’t matter. At my family’s restaurant we took the Mojito and made it a star, because no-one else wanted to make it. It was like a badge of honor.

And which cocktail is your version of heaven?

It’s tough… obviously I’m a huge Rum lover so probably a Hotel Nacional. I like the complexity, it’s like a Daiquiri with a little more going on.

To me whatever you want to drink I’ll make it, it doesn’t matter.

I tend to drink Sherry or Beer at the moment. I might do a sipping drink like a Sazerac if I have friends round.

So, some kind of Vermouth, a sweet one and a dry one, a great Rum (preferably Santa Teresa 1796), a good Gin and then bitters. Secret number six would be salt. It’s one of those things that helps balance, and improves cocktails regardless. A high rye Bourbon in there too would be good so that you can cover all of your bases.

Any great chef or bartender is always tasting.

There isn’t one that comes to mind, I’ve just practiced and practiced and it’s all about hardworking, and getting a feel for what you’re doing. Tasting your ingredients is really important and helps you to know if it needs more stirring, more sugar, etc. Any great chef or bartender is always tasting. Late in the night the ice can be a little wet, so that always matters too.

Okay, let me set the scene: Florida, I was working a solo brunch shift and had a few guests at the bar. Two guys who had been there for a while and had full steaks for brunch, asked for the check. I dropped the check and kept taking care of the bar, started making a couple of mimosas, ringing food in, when I noticed voices that started getting louder.

Even if someone walks in and it’s their wedding day, they should still leave happier than when they came in.
I turned around to find the two guys having a shouting match over who would pay the check, the phrase, “Why do you always want to pay? Do you think you make more money than me?” Anyway, steak knives were grabbed and threats were made. I had to jump over the bar, wrestle the knife off the first guy, punch him in the stomach, and put the other guy in a hold. All over who would pay the check! It was a good time sitting with the entire management team and explaining everything to them while watching the security videos.

I’m big into athletics, one of the worst things is that basketball courts are closed in New York at the moment. I’m also into video games as well, I go to Comic Con every year, I love cartoons, manga and all of that. Then spending time with my wife and dog as well.

I studied animation and character design, so I would definitely be working in that and video games if I could.

Y’know, it’s one that not everyone uses. It’s a soda syphon, basically it’s a chamber pressure where you can make foams and carbonate cocktails. The versatility of it is amazing.

I would love to own my very own restaurant, and be half restaurant and half bar. During this interview I’ve been cooking and being that person that pairs food and drinks is who I am and I think as a venue it could be really fun. It would be no frills, just somewhere that is fun and delicious, that would be amazing.

Y’know what it would have to be Anthony Bourdain. I worked in one of the restaurants where he worked for a little while in Province Town. Usually he’s a Beer drinker, but I would want to make him that one cocktail where he would just be like “hot damn this is amazing.” He was such an influence in my cooking.
Read more about:
Published Oct 6th 2020
By Louise Sinnerton