Published in:
By Sasa
In this second edition we’re taking a peek into three impressive home bars and trying to discover what different strategies their owners might have for building up their boozy booty. 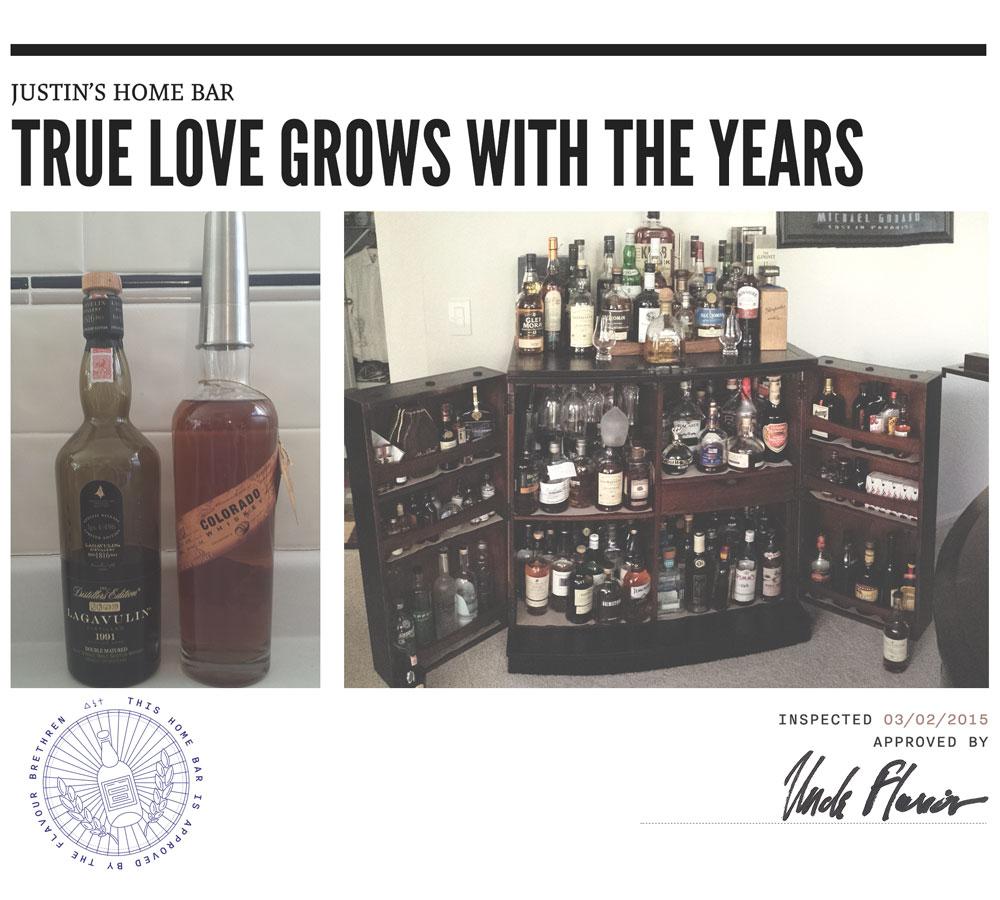 We were already pretty amazed when Justin sent us a photo of his home bar, but when he told us that he also holds a separate wine & beer fridge we just couldn’t hold ourselves back anymore: “Can we please be this guy’s best friends?”

Justin’s bar cabinet shares a room with his piano and is centrally positioned, so that he can easily access it on any occasion. It just so happens that 'any occasion' most often turns out to be a party, as he hosts them regularly and enjoys mixing drinks for his friends.

His interest in spirits started during a spell of bartending he did whilst at college and he started building his collection back in 1998, when he bought a house that also happened to have that extra “piano room”.

Scottish Whisky and Bourbon are his favourites, so when he was given the chance to plan one week of his honeymoon, Justin decided to take his wife to Scotland on a distillery tour. They got to see everything, from the Highlands to Speyside and even his favourite, Islay.

It shouldn’t come as a surprise then that his favourite Whisky brand is the “smokey, peaty, smooth, and delicious” Lagavulin, the ’91 Distiller’s Edition in particular. Not only is it a great Scotch, but it also comes connected with the fact that it was his wife’s gift to him when they first started dating. What a gift! What a girl!

Justin’s second favourite tipple is Stranahan's Colorado Whiskey. He enjoys the craft scene of this region and this bottle is a tad more special to him, because he feels its expression slightly changed since the distillery was sold.

Gary’s bar grew faster than a Flaviarista to a free Whisky sampling! His friend introduced him to the world of Whisky a mere 18 months ago and incredibly he’s already built up a collection of over 150 bottles! (No, that wasn't a typo; this guy really is moving seriously quickly in the world of Home Bars). Currently still storing the bottles in an overhead unit cupboard, Gary plans to acquire a more sophisticated storage unit for his collection soon. 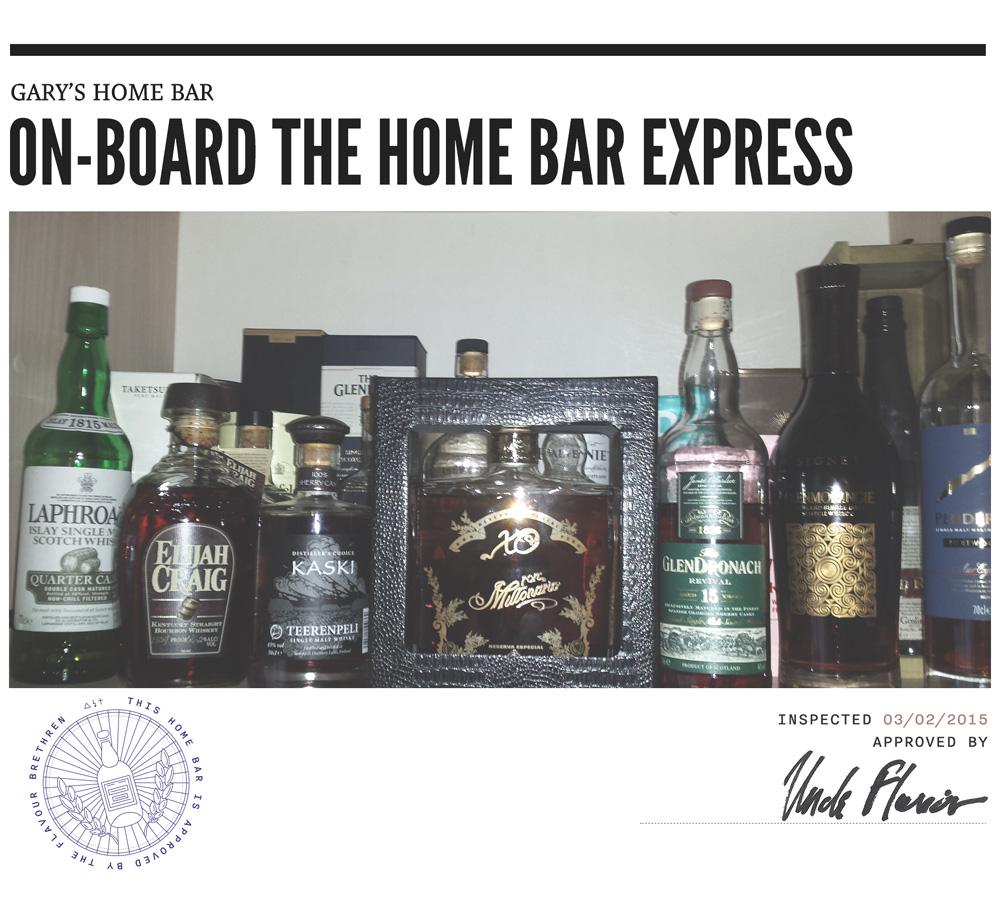 The favourite two Whiskies in his bar are both Sherry influenced: a Glendronach 15 Revival and the Teerenpeli Kaski. “The Glendronach is a Highland Scotch Whisky, which exhibits dark rich flavours of coffee and fruits, while keeping a traditional Single Malt Scotch character. For me this works fantastically.”

The Teerenpeli is a Finnish Whisky that is aged for 6 years in Sherry casks. “I have only had this in my collection for about a month, after trying it at a Whisky event in London and it blew me away. The flavour it portrayed blew the likes of the Macallan out of the water; it had a smooth, sweet fruity taste, which then provided a smoky finish to ensure the Sherry didn't overpower the spirit.”

Gary’s second love after Whiskies are Rums, with the darling to his taste buds being a Peruvian Rum called Ron Millonario: “For me it could be described as 'liquid cake'. It exhibits a great sweetness like candied tropical fruits, even a slight resemblance to cola, yet it also has taste of leather in there, but only a small touch of it. This Rum is effectively a puzzle with all the pieces required to make a sublime Rum present.”

While most of his collection is for drinking, he’s saving a part of it to be sold on later as collectibles. His favourite trophies of a guzzler's investment portfolio are a Glenglassaugh 1986 28 Year Rare Cask Batch 1 and a Yamazaki Sherry Cask 2013 - yep, the Whisky Bible Yamazaki, luckily, he bought it before the book was out and the price has definitely already gone up on this one! 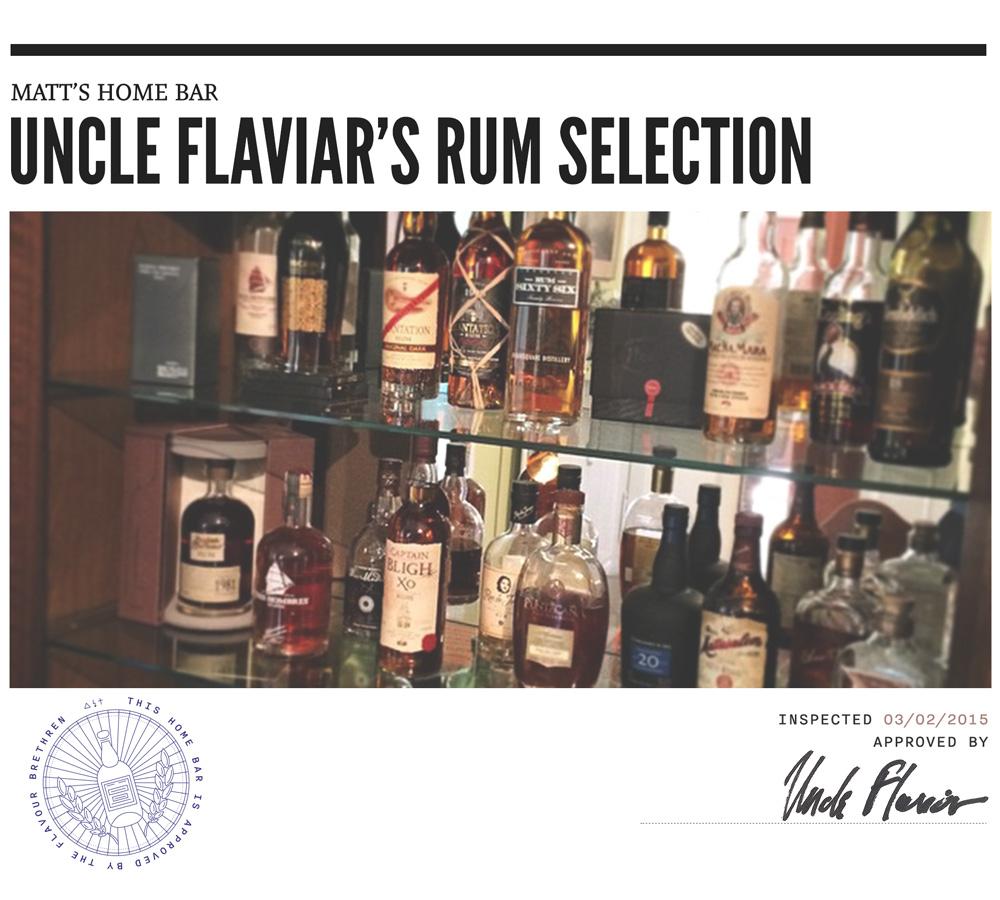 Matt’s chosen a very specific way of growing his home bar: he only buys Rums and he only buys them from Flaviar. He did buy a Whisky, a Mezcal and a Gin once, “but I only bought Gin to help save the elephants.”

His Rum romance started with our first Rum tasting pack, which was love at first sight. He went on from there and has ordered 'almost' every Rum ever offered on Flaviar. “To be completely honest, two are missing – I tasted them in a tasting pack and disliked them, so I’ve decided to skip those two.”

His favourite? “Definitely Tres Hombres. It’s a delicious Rum with an extraordinary story that makes it even more special. However, I haven’t tasted them all yet; some are still waiting for the right moment and the right company to be cracked open."

Matt is not a cocktail kind of guy; he likes to sip his Rum neat in the evenings while watching TV. He keeps his collection handy, in a living room cabinet next to his TV set. Hey, Matt, how abut we come over some time for a film night?

Alright, we're done with the Home Bar tour, guys, you can have a Whisky now, we know you want to!

While at it: what's the story of YOUR liquid gold stash? Share it with Flaviaristas in the next Home Bars episode - send us photos of your home bar over email or post on Instagram using #homebarstars