Hogshead 733: An Epic Tale of Art, Whisky, and the Sea

Published in:
By Gregor 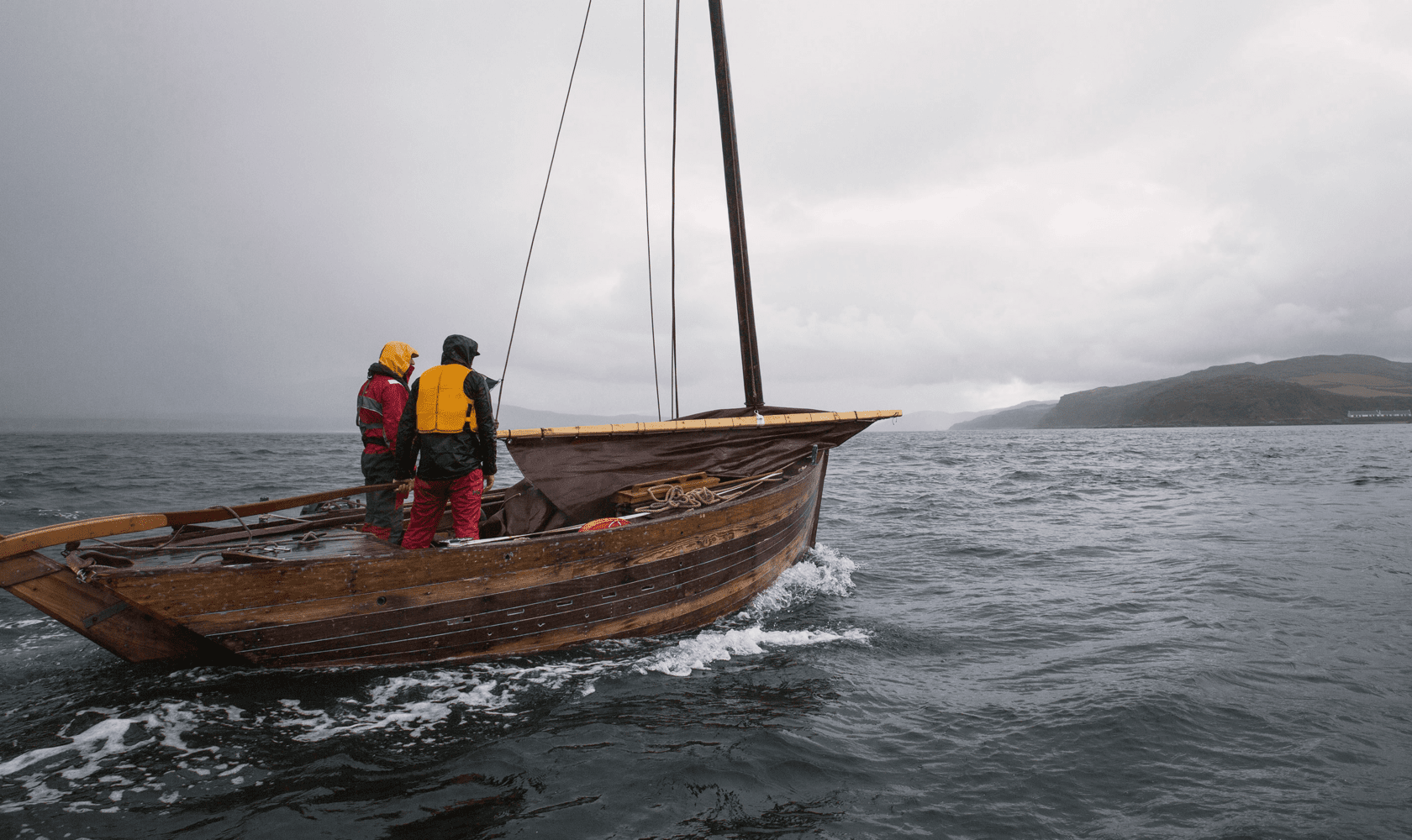 Ahoy, there. Here is a little tale about a boat, the angry waves and some booze. That’s everything you need to either strike up a riveting sea yarn or make some delicious Whisky. And in this case — both.

Just ask Mark PoÅ¾lep and Maxime Berthou. The two artists behind Hogshead 733 have an amazing story full of heritage, adventure and nature to share. 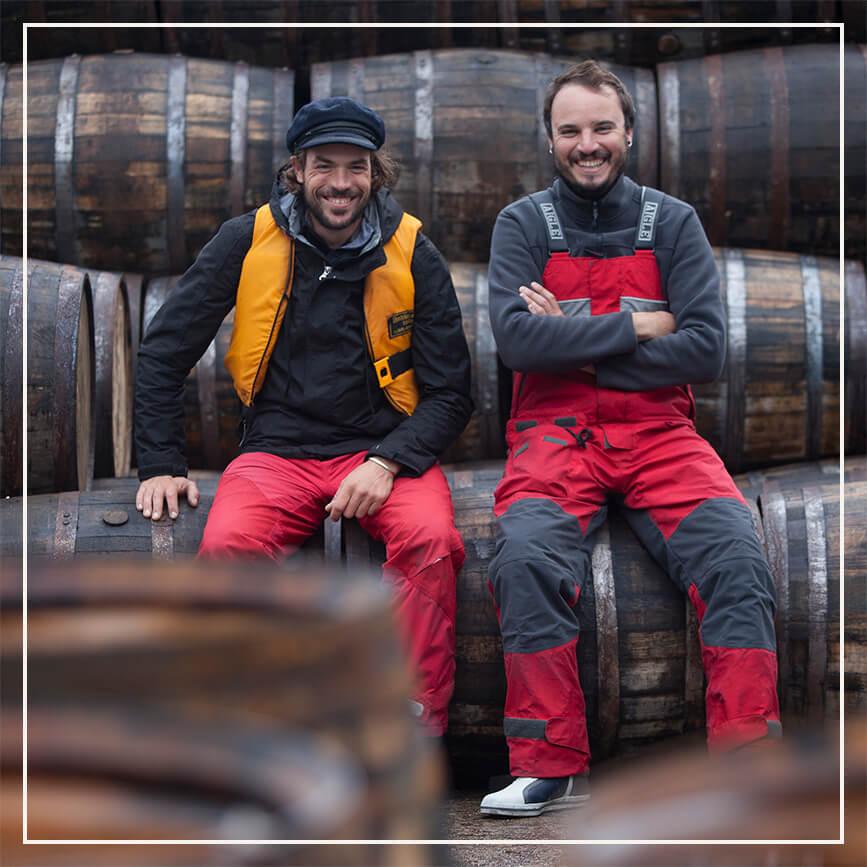 Their artistic project involved the restoration and decontamination of
an old fishing boat, her 733 miles sea journey from France to Scotland, and the final transformation of her hull, soaked with sea, salt and wind into two Hogshead Whisky barrels.

The barrels were then filled with peated Bunnahabhain and laid to rest for 8 months.

“The idea for the project came from the fact that white oak used for old fishing boats is also used for making Whisky barrels. Whisky was always closely linked to the sea, that’s why we decided to combine the two,” explains Mark.

To make the first ever Whisky finished in casks made from a former fishing boat was always going to be a difficult task. The fact that Mark and Maxime decided to take on the epic journey across the English Channel all by themselves made it almost impossible.

But hey, adventures are for the adventurous, aren’t they? 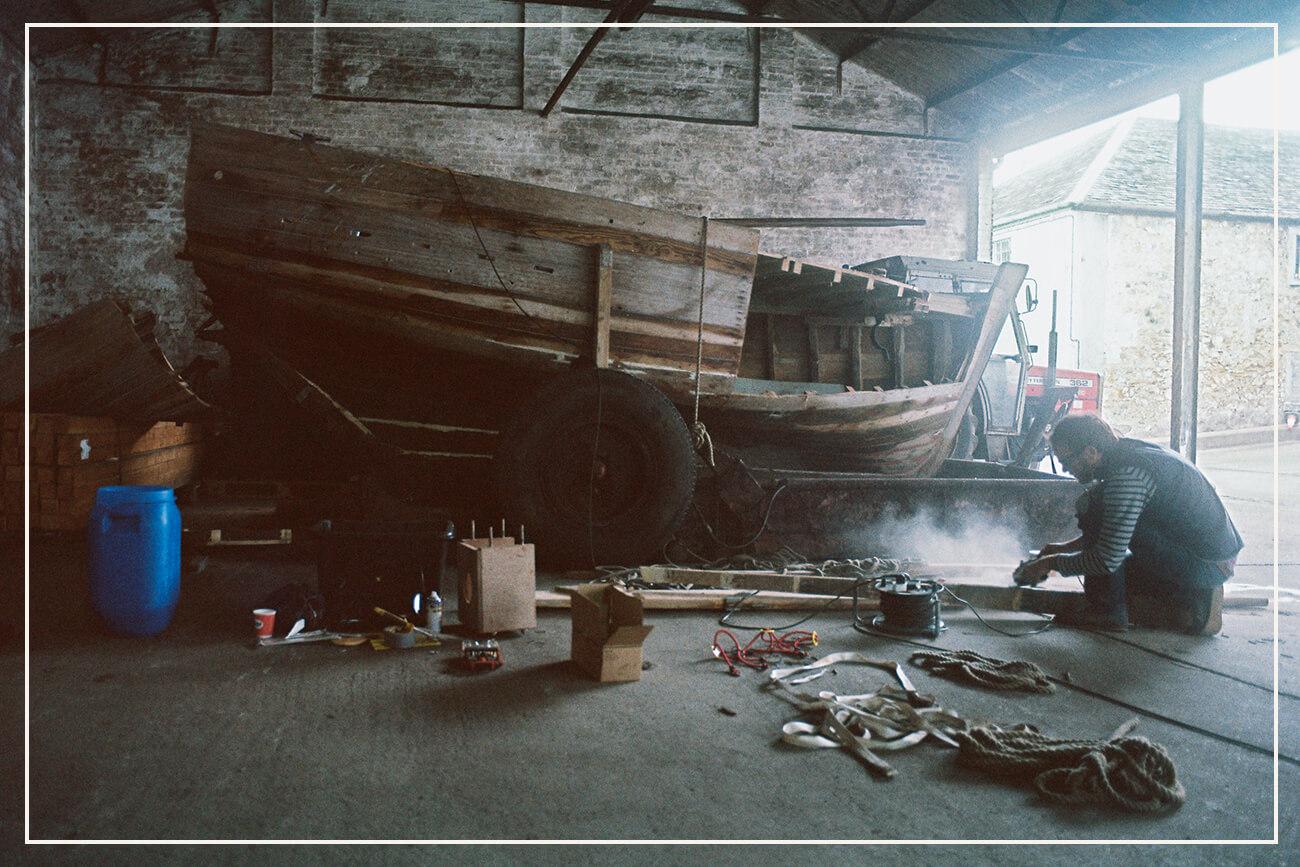 Their choice of vessel was a 1941 Breton fishing boat called Misaine, which was devoid of use for many decades, but suddenly got brought back to life for this special occasion.

A local builder helped with the strenuous two year restoration and decontamination of the boat, before they took her for the last sea journey from Trebeurden in Brittany to the Bunnahabhain distillery in Islay.

Just 36 hours after leaving the dock, the modest boat and its crew was put to the test. 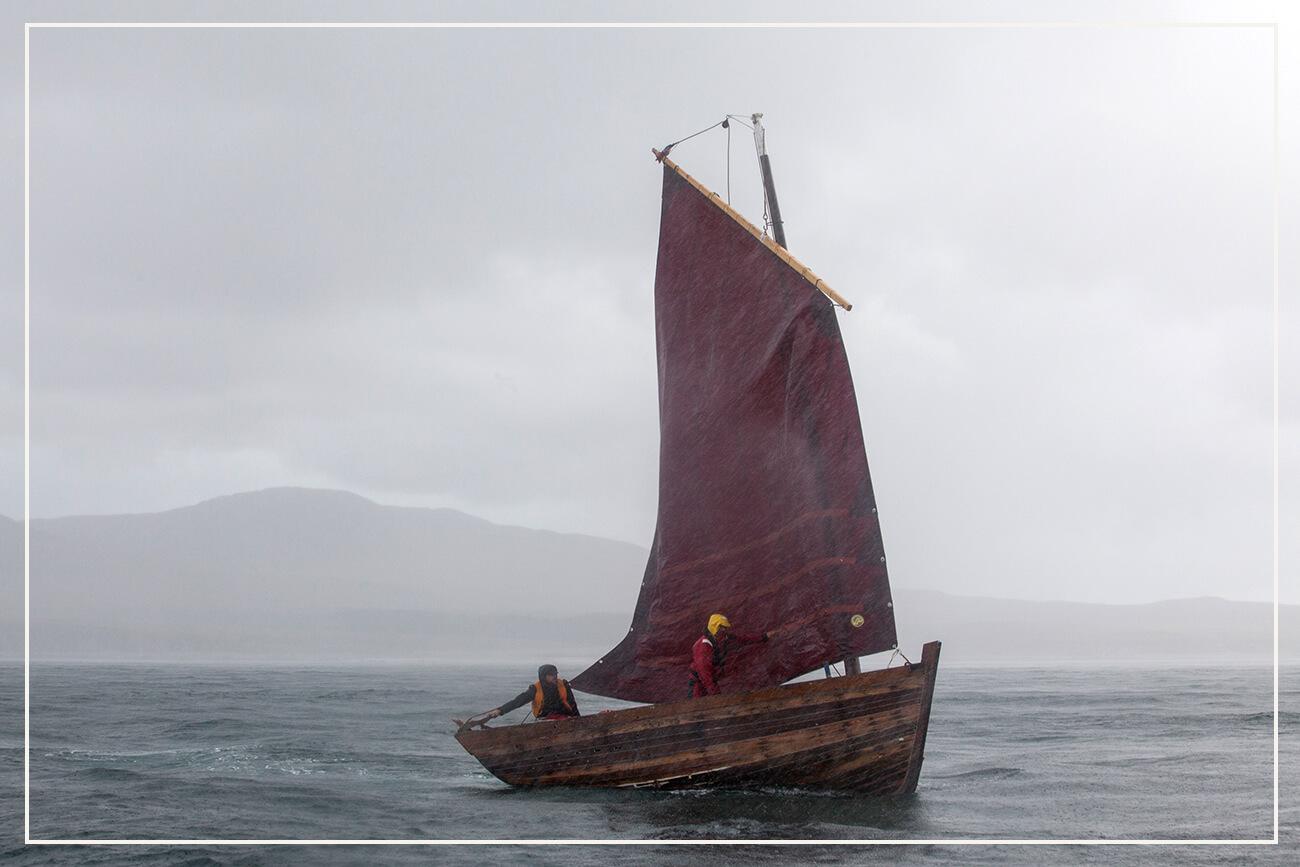 “The engine stopped working, we only had one headsail, which we couldn’t hoist, because the winds were too strong. The second storm cost us the radio connection and the lamp at the top of the mast, which meant we were lost at sea whilst invisible to the big cargo ships.”

AUGUST 26, 2015
The old wooden hull screeched and juddered at every hit. A loud splash awakened us from concentrating on steering the helm, the compass and looking at the horizon. The wind tore off the radar reflector. It sank to the bottom of the sea, where it joined the mast light, which had met the same fate an hour earlier.

AUGUST 30, 2015
All of a sudden, the dead calm of the open sea broke into a hellish snarl of strong currents and huge waves coming at us from all directions. They grabbed hold of the helm and squeezed the entire boat. The lizard wrapped its tongue around us and would not let go for the next five hours.

SEPTEMBER 09, 2015
But as far as superstition is concerned, don’t even think of whistling or, worse, singing Wind of Change by the Scorpions. The melody brings strong winds and colossal waves. A school of dolphins under your boat brings good luck for sure, but it can also mean a warning against imminent danger.

SEPTEMBER 17, 2015
From Ilfracombe we had to cross the Bristol Channel to reach Swansea. At one point Max poked his head from below the deck, his face as white as a sheet. “What’s going on?” I asked and joked: “Are we sinking?” – “Yeah”, he said, “I think we’re sinking.” Water started gushing in through the cracks, which we sealed just a few days ago. We had an electric and a hand pump on board. Judging from the amount already pumped we gured that 150 l of water poured into the boat per minute.

Because the wood had to be reused as barrels, no additives could be applied to protect it, which meant the boat took on plenty of water. Soaked and tired, the unseasoned sailors were scared for their lives.

… and two barrels of Whisky.

Of course, nothing ventured, nothing gained. Mark and Maxime stayed the course and one month later reached Scotland. Bruised and weary, but in one piece. The sea did not defeat them. In fact, it brought them closer together.

On their arrival on Islay, the boat was dismantled. The oak, soaked with sea, wind and the adventure, was used for the production of two 250 liter barrels – Hogsheads. Casks were made according to the traditional procedure by professional cask makers in Speyside cooperage. 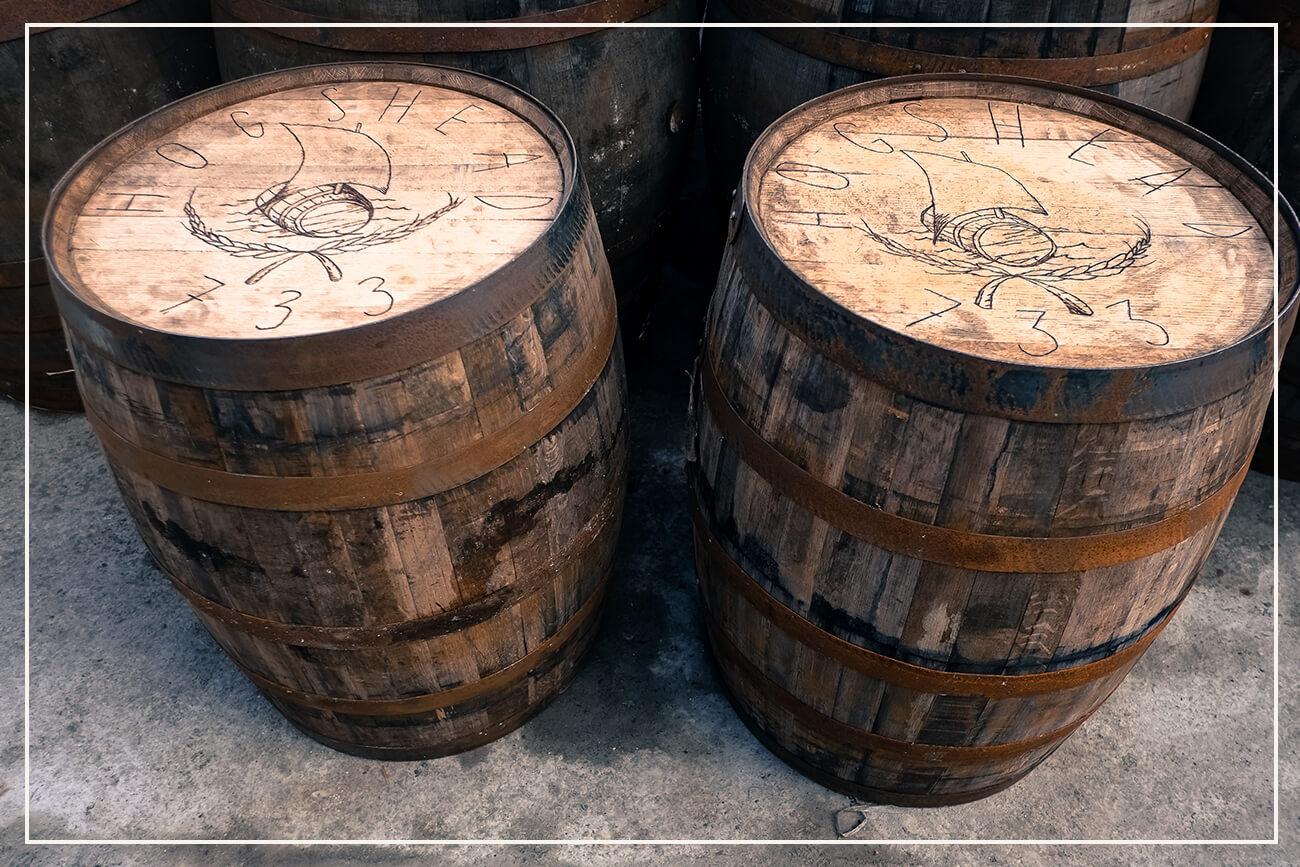 The two barrels were then filled with peated Whisky, named Mòine, distilled in 2003 by Ian Macmillan in the Bunnahabhain distillery. After 8 months the journey finally came to a close and 733 bottles were filled. Each bottle represents one nautical mile of their epic sail.

Well, is it any good?

You better believe it. Mark describes the Bunnahabhain Hogshead 733 Whisky as complex and strong. “You can feel the oak, you can feel the salt in the background, the fresh smoke coming from the burnt casks.”

The Whisky is everything you would expect from an old Bunnahabhain, but so much more. It has that perfect balance and character that most Whiskies can only strive for. Plus that something extra only a good story can provide.

“I see it more as an art piece than a drink,” Mark confesses. It seems we have the same taste in art. The best part is we can actually taste this art. 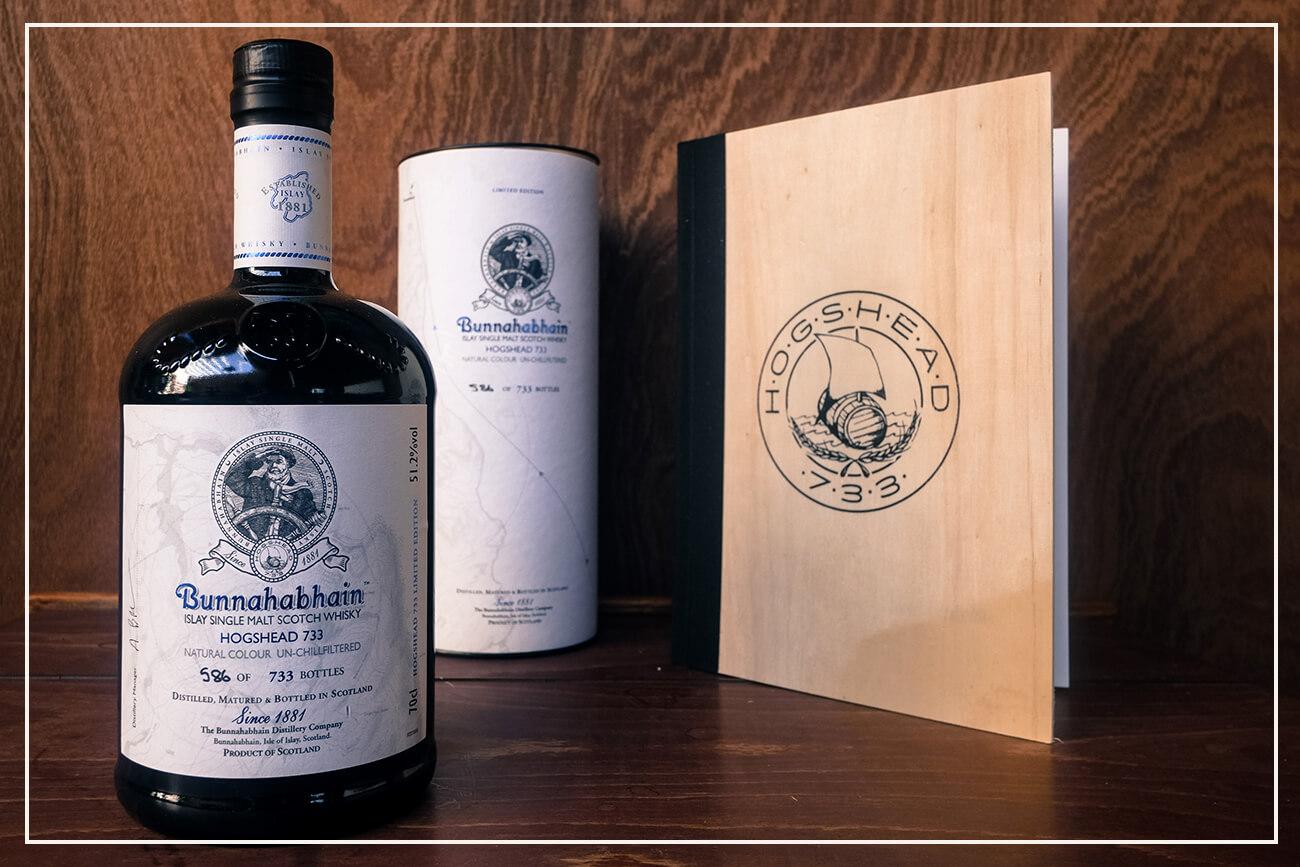 If you want to know more, you’ll be happy to hear that Mark and Maxime documented their whole journey in the book that bears the same name as the Whisky. But the ending of this tale has yet to be written.

So since we know you Flaviaristas’ always like to get to the bottom of the barrel, ahem, story, we must invite you to try the dram as well. Bunnahabhain Hogshead 733 is now available to Flaviar Members, each bottle accompanied by a wood covered ship's log.

Proceeds from the Whisky's sales will be used to produce a movie of this odyssey. The kicker? All Flaviar Members who purchase a bottle will be credited in the film.

Take a sip, then take a bow.
Read more about:
Published Jun 8th 2017
By Gregor 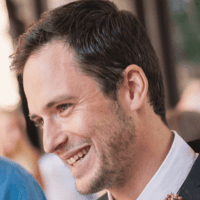 Gregor is a former journalist who likes Whisky, writing and especially describing himself in the third person. When he is not making a difference working in higher education {cough}, Gregor is lucky enough to successfully combine the above mentioned passions by helping the Flaviar team write copy and by composing a killer author bio.