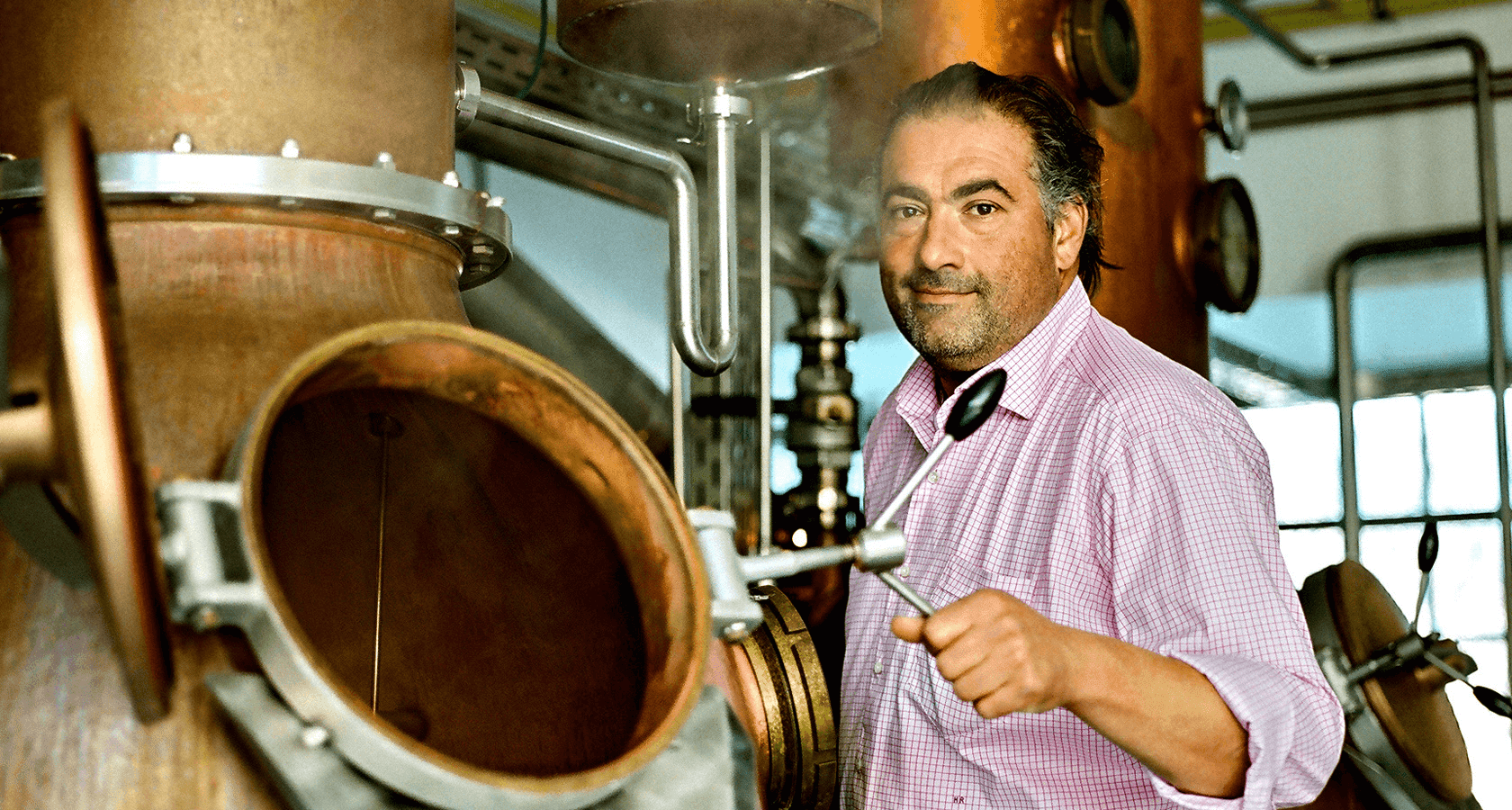 For large swathes of Europe the fruit Eau de Vies aka Schnaps are the spirit of choice. Crafting a perfect example of these palate masseurs takes great fruit-growing and distilling skills topped with the perfect nose.

For a chat on that, we turned to the man who has them all: Hans Reisetbauer of Reisetbauer distillery, a craft superstar from Austria and an Eau de Vie institution. 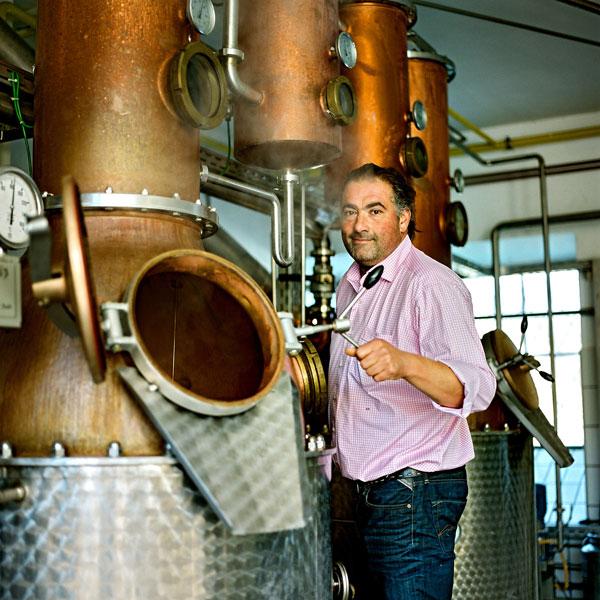 When his first Eau de Vie was sold to the most famous restaurant in the country he knew he was on to something pretty good... so good, he’s even faced copycats of his products! 50% of the quality comes from the fruit, he says - so when the harvest time comes, you can find him in his orchards, observing the fruit closely to make sure it's picked at the perfect stage of ripeness.

We visited him on his property, where his fruits are grown and his drinks are made, and chatted about life, the universe and everything.

1. What superpower would you want to have?
The best nose in the world!

2. How would you explain your Eau de Vie to the Dalai Lama?
I’ve no idea! But I’m going to travel to Tibet and India in April and can tell you after I come back.

3. What’s your favourite music and what drink goes with it?
Rolling Stones, Janis Joplin and Johnny Cash. With the Rolling Stones, I like a perfect Gin and Tonic, made with Blue Gin.

4. Who's the second best distiller in the region?
In Austria, I think Gölles from Stiria is the best. They produce drinks in an older, more traditional way than we do, but I think he’s the best in what he does.

5. What would you choose for your last supper?
For the Wine, I’d go with Grüner Veltliner by Bernhard Ott Winery from the Wagram region in Austria. I’d pair it with three traditional Austrian dishes: perfect Wiener Schnitzel with potato salad, a Kaese-Krainer sausage and Rotbarbe (red mullet) as it’s prepared in a restaurant in Munich.

How did you get into producing spirits - was it a family tradition or a whole new adventure?

It’s tradition for the farmers in our region, and in Austria generally, to produce between 20 and 30 litres of Eau de Vie a year - it’s called Hausbrand.

My father's own farm had beets, barley, sugar beets and soya beans and at the time I started out I was studying mechanical engineering and wasn’t really interested in distilling, but just wanted to plant some fruit trees. So I planted my first orchard with 2,500 apple trees in 1990.

"At the time I started out I was studying mechanical engineering and wasn't really interested in distilling. I just wanted to plant some fruit trees."

Then in 1994 I met Karl Hubert Gasser, who was one of the best distillers in Austria and who had a lot of outrageous distilling ideas – he inspired me to go and start distilling myself.

In the first year we started with 120 bottles of Red Williams pear and won “Schnapps of the Year” at the Destillata European specialist trade fair. On the back of that came our first client, the famous Steirereck restaurant, one of the best restaurants in Vienna. Then in 1996 we won the Destillata again and our production had already reached 1,000 bottles - this was the start of our company.

Quite a start! What’s the key to such high-quality Eau de Vies?

More than 50% of the final product quality depends on the fruit. All good producers in Europe buy their fruit from the same 5-6 fruit dealers and small local farmers, but I decided I wanted to grow our own fruit and we now have an orchard of 24,000 trees with 9 different kinds of fruit and a few different varieties for each. 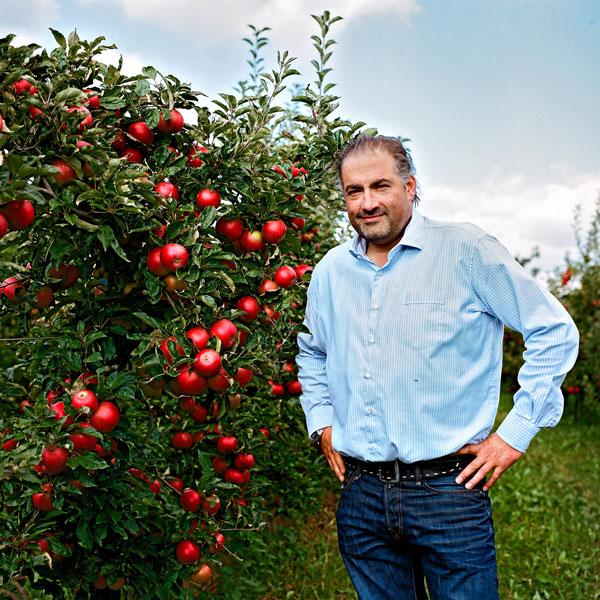 All of our fruit is handpicked and we try to get the best fruit each year. This is one of the most important things we can do.

"More than 50% of the final product quality depends on the fruit. I wanted to grow or own fruit and we now have an orchard of 24.000 trees."

What do you do to make sure you have the best fruit?

Once the trees are planted, we then need to make sure every tree produces just the right amount of fruit – there shouldn’t be too many or too few on the tree. If the fruit is too large, it doesn’t taste so good, so we go for the medium-sized fruit.

"We harvest Williams pears at three different times: first, when the pears are green to yellow, the second time when they're nicely ripe, and the remaining pears get harvested in the late ripened stage."

The next is to harvest the fruit on the perfect day. We know that we have to harvest apricots completely ripened, just one day before they fall off the branch. 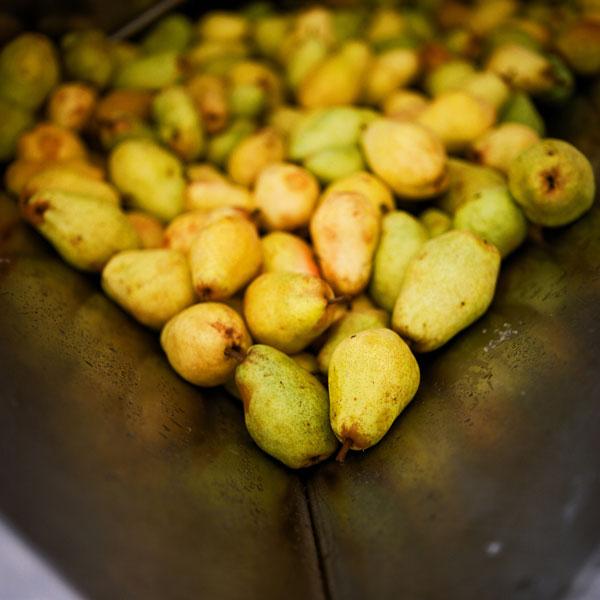 When we harvest Williams pears, we harvest them at three different times: the first time, when the pears are green to yellow, the second time when they’re nicely ripe, and the remaining pears get harvested in the late ripened stage.
I try to find the perfect ripeness each year, but it really depends on the weather and temperatures for when that is, so we need to observe the orchards closely and growing the fruit ourselves is the best way to make sure it’s harvested at the perfect time.

How many bottles do you now produce each year?

We produce around 120,000 bottles of Eau de Vie and on top of that comes our Gin and Whisky production. 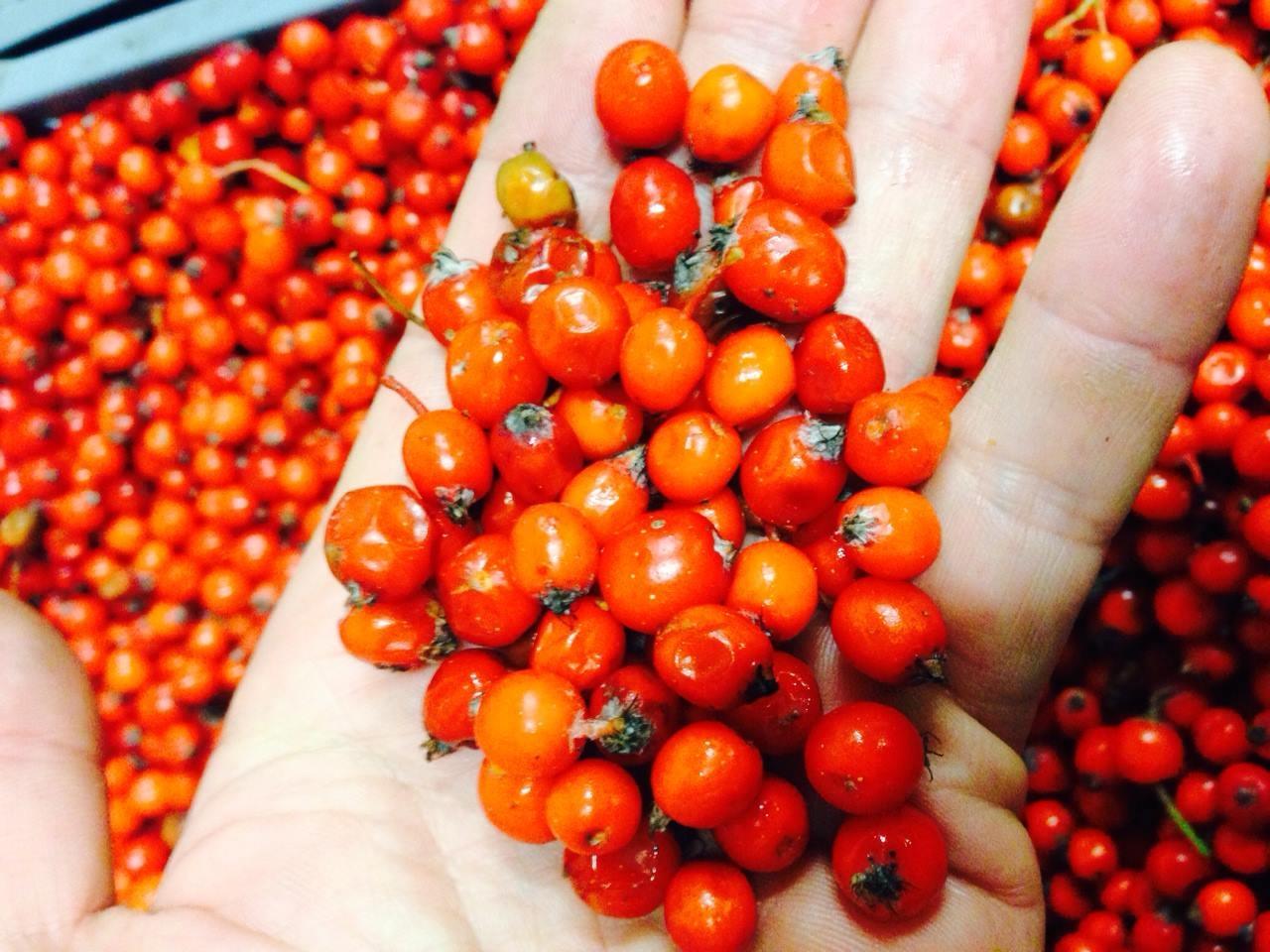 In 2014, we produced a bit less, because we had a very rainy summer that caused lower sugar quantities in the fruit. We got nice acidity in the fruit, but not much sugar, and since we don’t add anything to the fruit this made it a bit harder for us, as we needed to distill 20% more fruit for the same amount of Eau de Vie.

"Rainy summer in 2014 caused lower sugar quantities in the fruit. Since we don't add anything to the fruit, we had to distill 20% more fruit for the same amount of Eau de Vie."

Which of the Reisetbauer drinks is your best seller? And what’s your own personal favourite?

We have 15 different Eau de Vies, but Williams pear accounts for about 20 or 25% of the total. It’s my favourite to produce, as it’s extremely difficult to make it perfect; bad oxidation can happen very quickly. For drinking, Rowanberry is one of my favorites.

Some of your Eau de Vie flavors, such as carrot, are pretty unusual - do you experiment a lot? 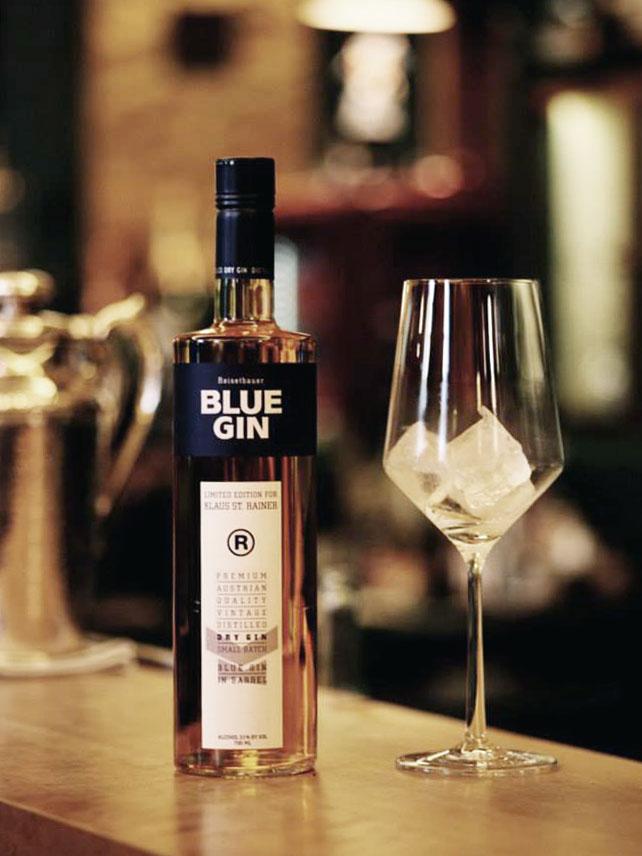 We started distilling carrots in 1997 and the most recent novelty we brought to the market was just four months ago with Orange Eau de Vie – it was distilled in 2010 and then aged for 4 years in oak casks.

What other spirits do you produce?

We started producing Gin in 2006 and Whisky in 1996. We also produce Trester, which is similar to Italian Grappa.

For the grapes, we partnered with high-end wineries from France, Italy, Germany, and Austria to create 6 grape-based drinks that each represents one of the wine regions. 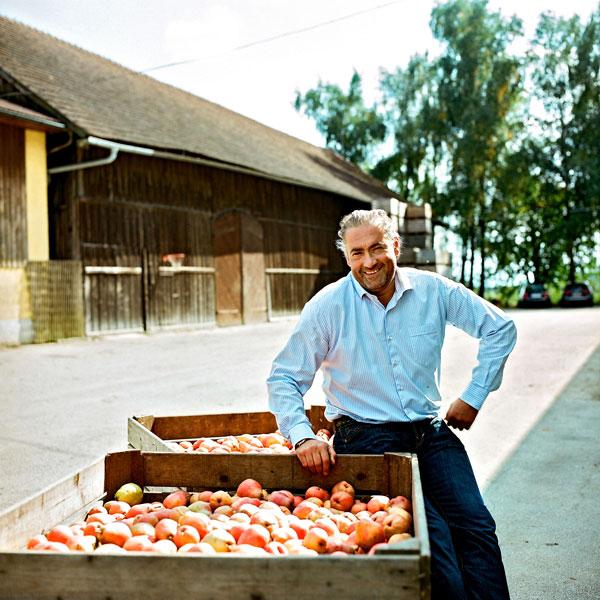 One thing we do different to what is usually the case with Grappa is that we distill within hours after the grapes are pressed, instead of leaving them to ferment for 3-4 months.

What lies ahead for the Reisetbauer distillery?

In 2015, we’ll release the first Austrian 15 Year Old Whisky. We’re also releasing another batch of the Blue Gin that we first launched in 2014, but it’s going to be available exclusively in the spring and summer.

We have a lot of ideas, but we make our plans year by year. I started distilling 20 years ago and my son, who’s 24, is now working with me and we make a really good team!

No doubt about that! We're looking forward to more goodies coming from the Reisetbauers!