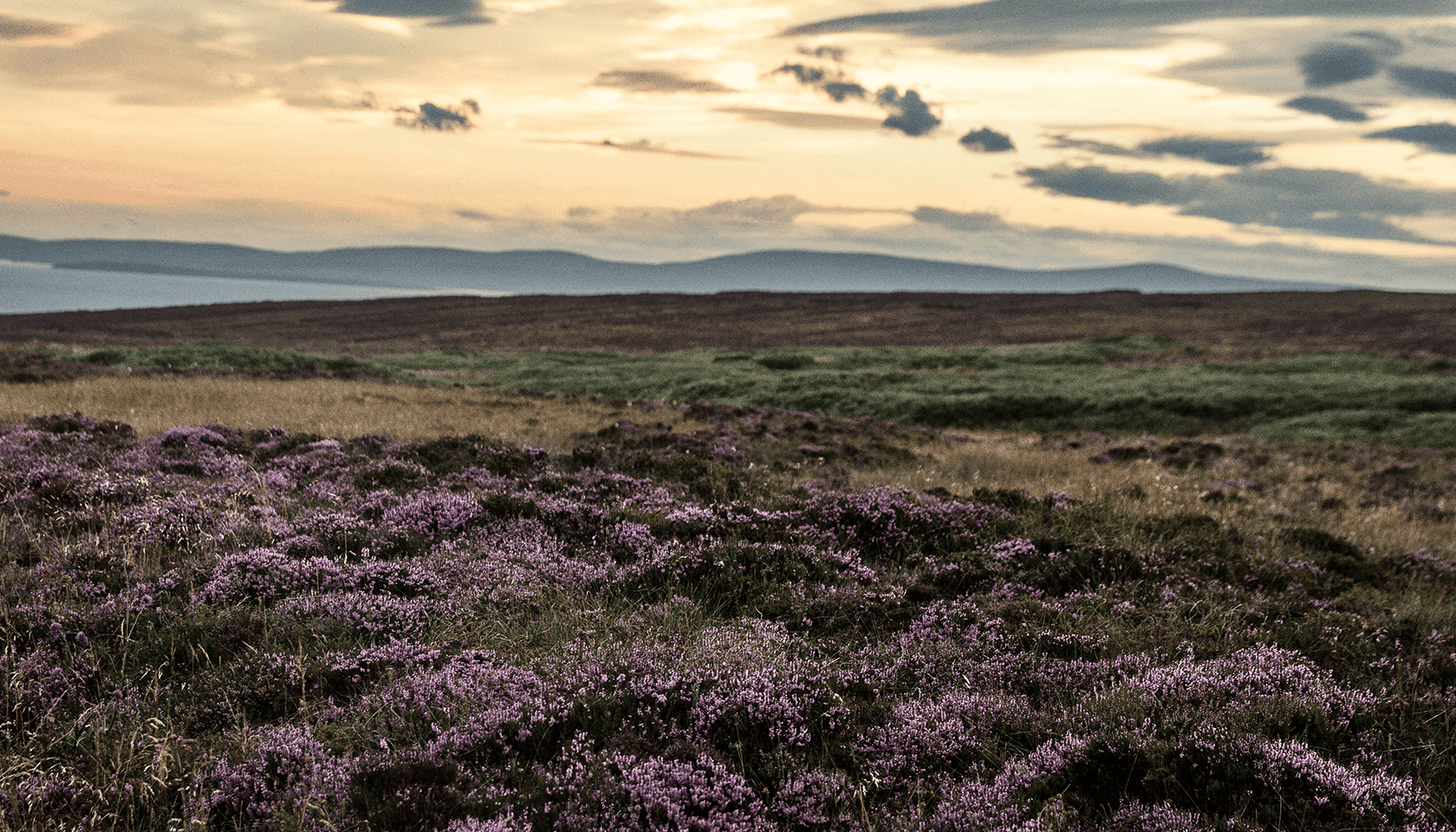 Shaped not only by the remote location and wild climate, but also by the Vikings who settled on Orkney over 1,000 years ago, leaving their mark on the culture and the distillery. With one in three Orkney islanders sharing Viking DNA, Viking pride runs strong on the island and Highland Park can honestly say it’s a Whisky crafted in the old way by a new generation of Vikings.

Today, their descendants are carrying on that fierce tradition at Highland Park and taming Orkney’s unusual peat to make an elegant Scotch that tastes like home. (And a bunch of other fantastic things, too, but we'll get there.)

With true modern-day Viking soul, Gordon Motion is a badass in his own right, having guided the distillery’s single malts through an explosive growth that saw Chairman’s Trophy the past three years at the Ultimate Spirits Challenge and a handful of Double Gold medals at the San Francisco Spirits Competition over the years. 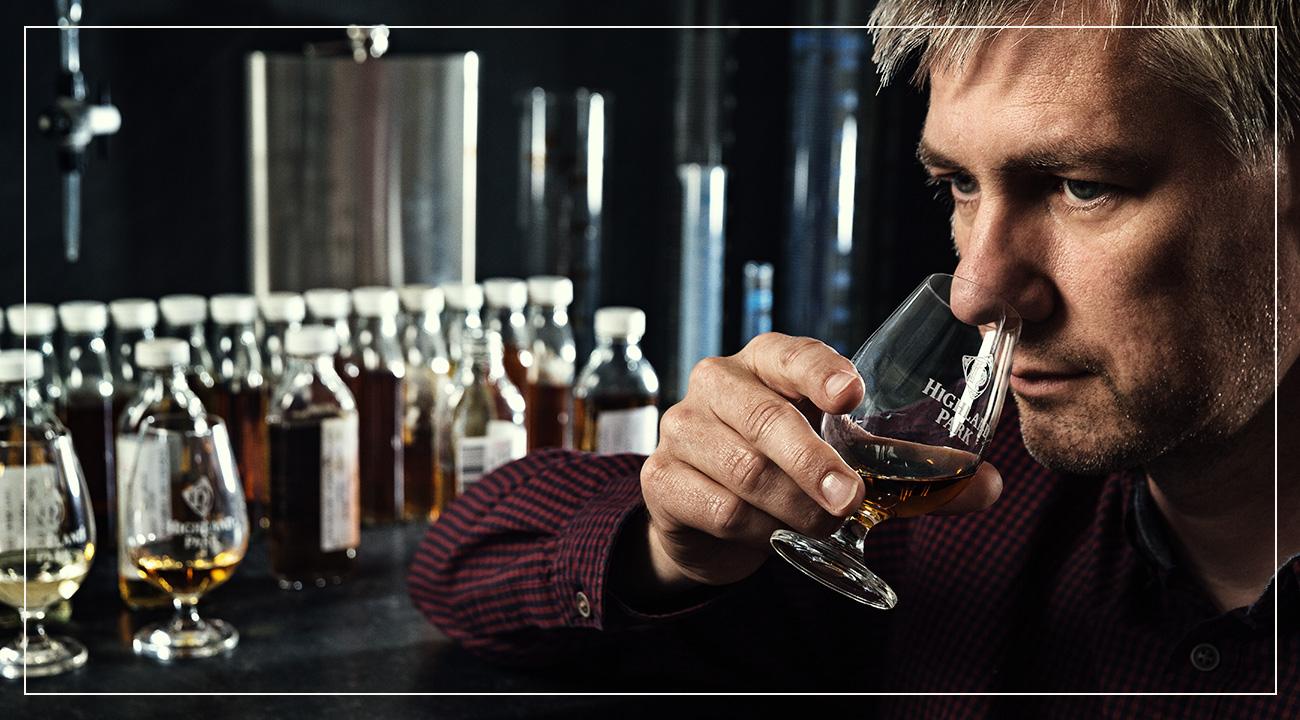 How did you end up in the Whisky-making business?

Gordon: My plan wasn't to go into brewing or distilling — my original degree at university was computer science. However, I'd been a keen brewer of Beer at home. It was probably between my third and fourth year at university that I went to Scotland on holiday with a friend.

I went straight back and did the brewing and distilling course at Heriot-Watt University.

We popped into a few distilleries as part of that holiday. And it was at that point that I thought, "You know what? I want to do this rather than end up sitting behind a computer all day."

So, when I came back to university to start my fourth year, I inquired about a post-graduate diploma in brewing and distilling, and they said, "Well, you've got to get your honors degree." That was the impetus to finish off my computer science course. Then, I went straight back and did the brewing and distilling course at Heriot-Watt University.

That set me up for getting jobs in breweries, starting right down on the shop floor, working my way up to management positions in the maltings, and ultimately, getting into this job 21 years ago.

Tell us more about Highland Park. What makes it special as a company and as a brand?

Gordon: Well, Highland Park is the northernmost Scotch-Whisky distillery in the world. The team is great up there — it's like a family when you go up. There are a number of specific things that impact the flavor of Highland Park. 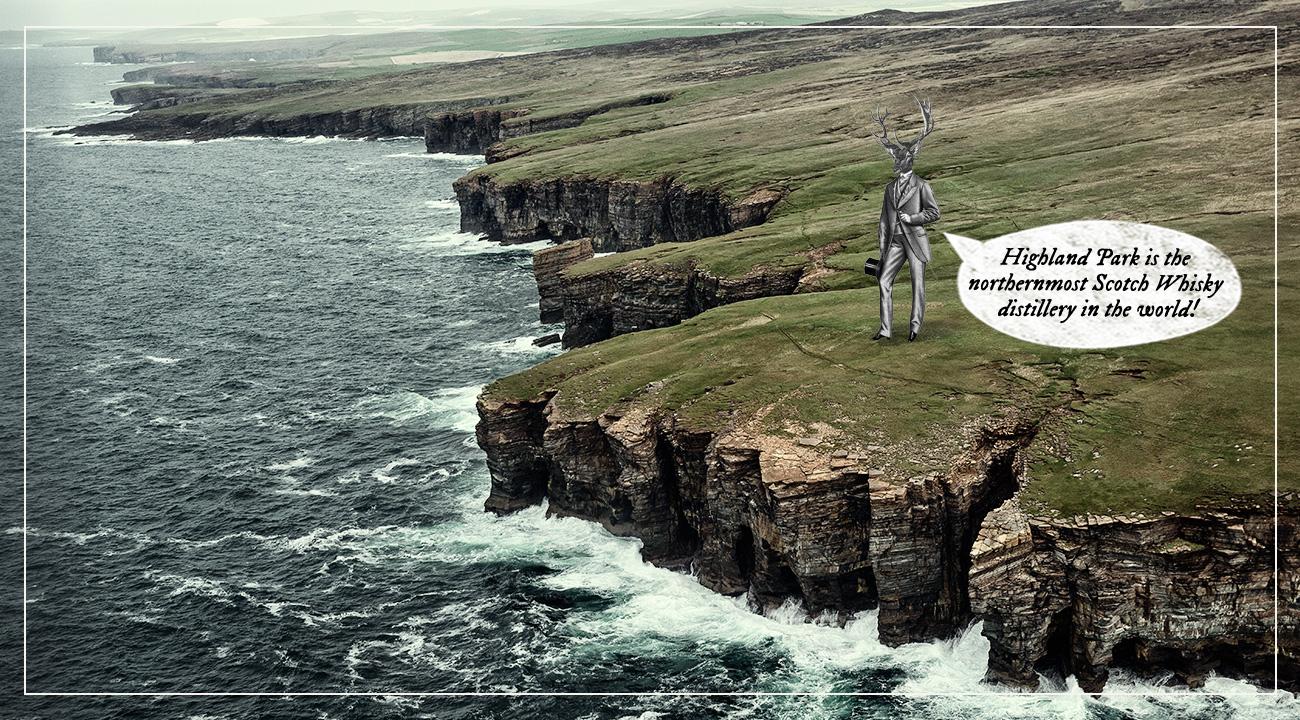 The most important is the peat and the source of the peat. If you’ve ever visited Orkney, you know that it is a very windy island. There's not a lot between Orkney and America except the Atlantic. And consequently, there are very few trees that grow in Orkney.

So the peat that's been laid down over the millennia is made up of low-growing shrubs. There's very little woody material in that peat. And if you burn the peat to dry the malt at the distillery — and it's one of the last few distilleries that still malts some of its own barley — that burning peat gives off a very aromatic smoke.

The fact that we've got a lot of color coming from Sherry casks means that Highland Park can be an entirely natural color.

It’s not a very phenolic, iodine-y note like you get from the peat on Islay or the mainland. It's a much more floral character. That's one of the key flavor differences. And we are the only distillery to use Orkney peat.

The second difference is that we use predominantly Sherry casks. Now, these are made specifically for us. We have partnerships with a number of sawmills, cooperages and bodegas in Spain.

We have strict conditions on how our casks should be built and toasted, depending on where the tree grew, and whether it was American or European oak. And we also control the Wine that goes into the cask to season it.

They are consequently extremely expensive. But when we use an European oak cask, we know that the quality we're gonna get out of that is exactly what we're looking for — this lovely, dark color, with a tannic, dried fruit character. And if it's an American oak Sherry cask, then we know it's gonna be a rich, creamy, oily vanilla character. 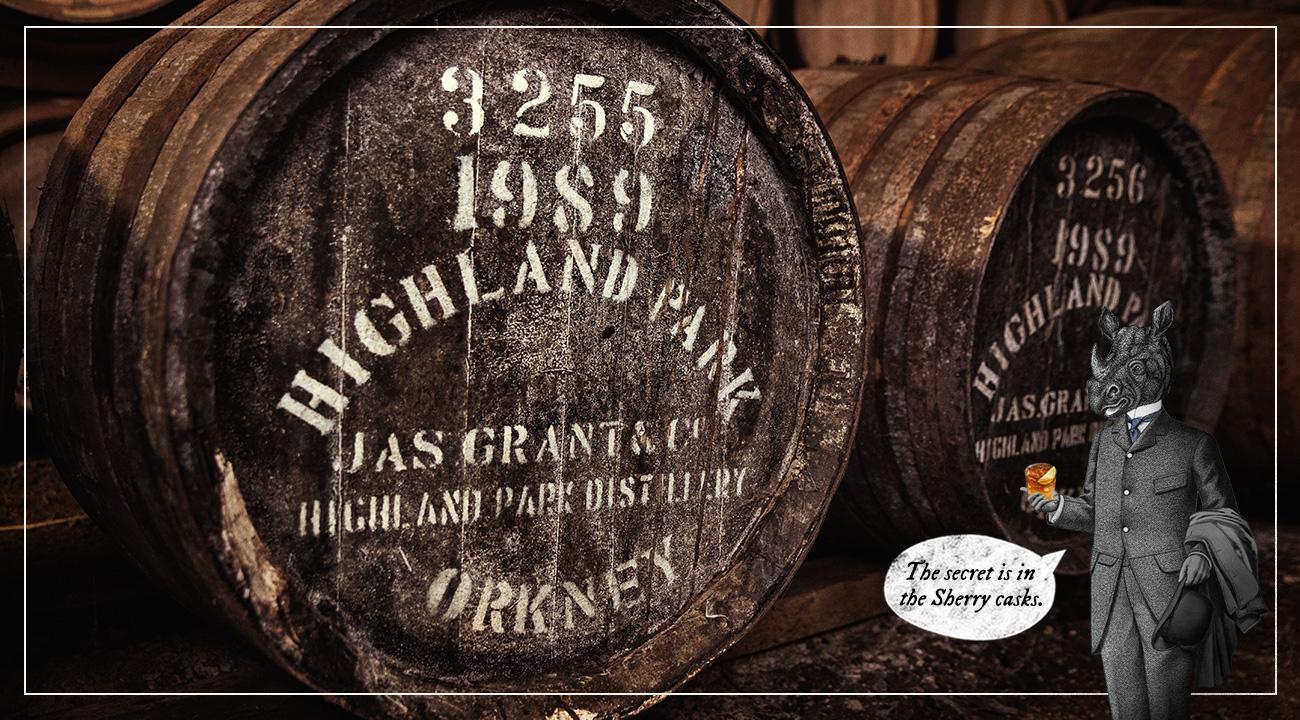 And the fact that we've got a lot of color coming from these Sherry casks means that Highland Park can be an entirely natural color. We don't add any spirit caramel to it.

What is cask harmonization?

Gordon: It's an old process that was used by distillers and blenders in the past. It’s where we take all the casks — different ages and different types — that we're using to make our final Whisky, put them together and add some water. If we're going to bottle it at 40% ABV, we have to take it down from cask strength. But we do it in two stages.

Our cask harmonization happens when we've got it to the flavor and the style we want. Then, we take the Whisky down to 46% ABV and put it back into exhausted casks. We do that for a minimum of a month. Now, that's not to add more flavor. We've got the flavor where we want it.

To me, Highland Park has a nice, light head of honey sweetness and a light smokiness.

It's to allow the water and the Whisky to interact, to settle down a little bit. It gives you a much richer, silkier, more robust flavor than if you took everything from, say, 60% down to 40% in one go and then had to filter it really hard to keep it nice and bright and clear in the bottle. in strength and then putting it back into exhausted casks to allow all these flavors to harmonize.

Tell us more about Highland Park’s Scotch — what makes it so unique?

Gordon: The overall driving character of Highland Park comes from the peated malt that's used. To me, it's a beautiful balance between the spice from the smokiness and some sweetness. I'm not a lover of very heavily peated Whiskies.

To me, Highland Park has a nice, light head of honey sweetness and a light smokiness — delicate smokiness — that comes from the use of the Orkney peat.

That's the characteristic flavor profile going through the Scotch. Also, our use of Sherry casks — that's very much our house style. It drives the color and the character. There’s a richness of flavor that comes from their use. 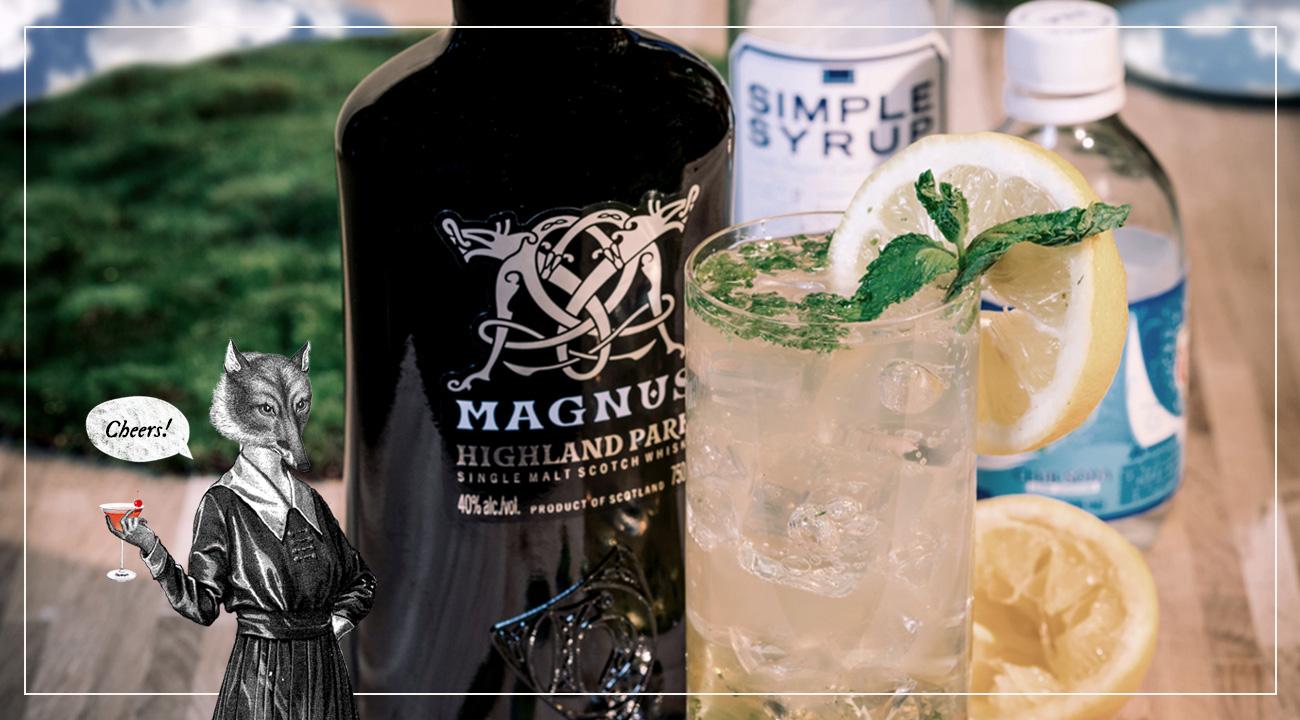 That's not the whole story — that's just what you can measure chemically. They don't all contribute to the flavor, but it gives you an idea of Highland Park’s smokiness compared to our competitors. It's very approachable.

1. If you could have one superpower, what would it be?
The sense of smell. I mean, my sense of smell is probably as acute as anybody else's, but I'm more trained to recognize it. There are still some things that I don't pick up, so yes, it’d probably be the sense of smell.

2. How would you describe Highland Park in three words?
Approachable, sweet, spicy.

3. What is your favorite music and what drink goes with it?
I'm into blues-rock and Highland Park 18-year-old.

5. Assuming Highland Park is your favorite, what's your second favorite Scotch?
I'd probably go for the Glenrothes Whisky Maker's Cut. It's an excellent example of what first-filled sherry casks can give to a Whisky.

Gordon: A good, creamy ice cream would probably go well with the vanilla character of a special edition we did. If it's a main course, you'll probably go for something with a light, spicy character to complement the light spiciness of Highland Park. You wouldn't go for something as strong as a curry, unless it was mild.

But certainly, something with a lightly spicy character would go with the light, peated notes of Highland Park. 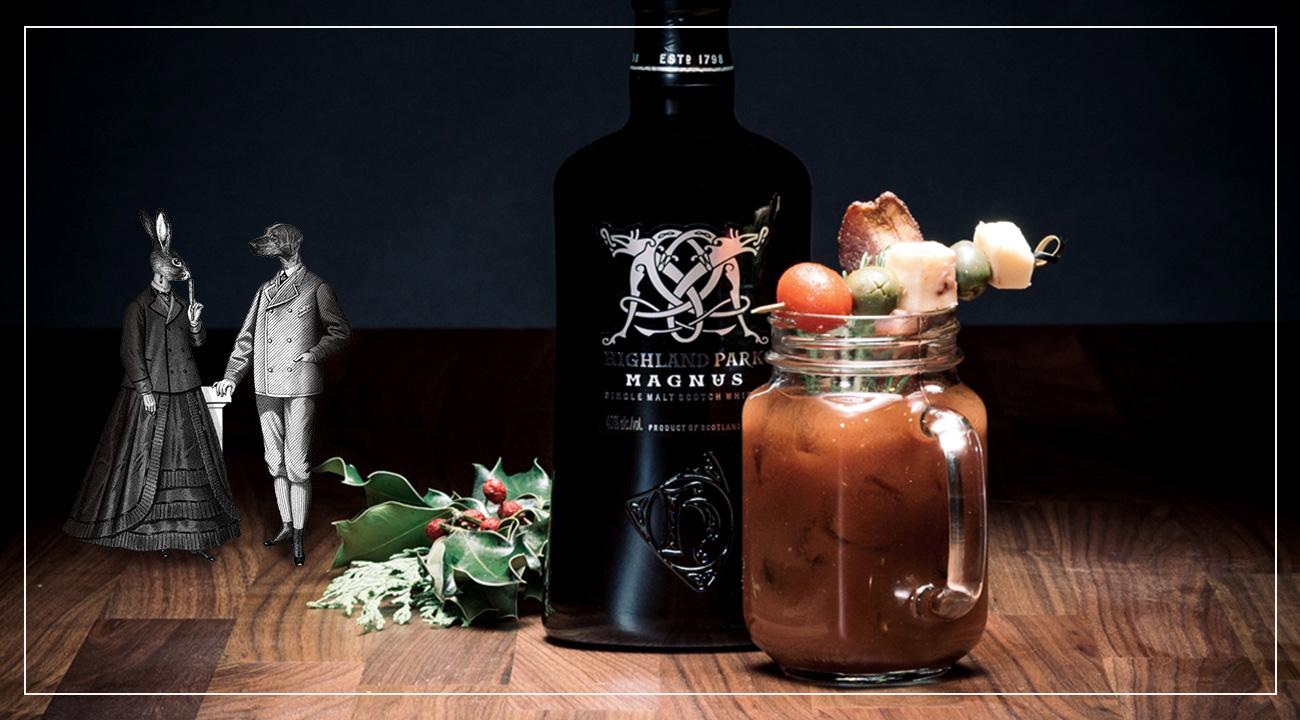 Gordon: Surprisingly, Orkney’s warehouses are, on average, warmer than warehouses you'd find on Speyside. That’s because it is basically in the Atlantic. The temperature stays pretty consistent over the year, particularly in the warehouses.

They may be one or two degrees warmer on average than Whisky in Speyside, and that has positive and negative effects.

The positive effect is that you don't have Whisky in the early stages getting poofed in the cask as it expands. So it matures much slower, and that means you can have Whisky on Orkney a lot longer. It'll actually take a bit longer to mature, but it’s a much more gentle maturation. 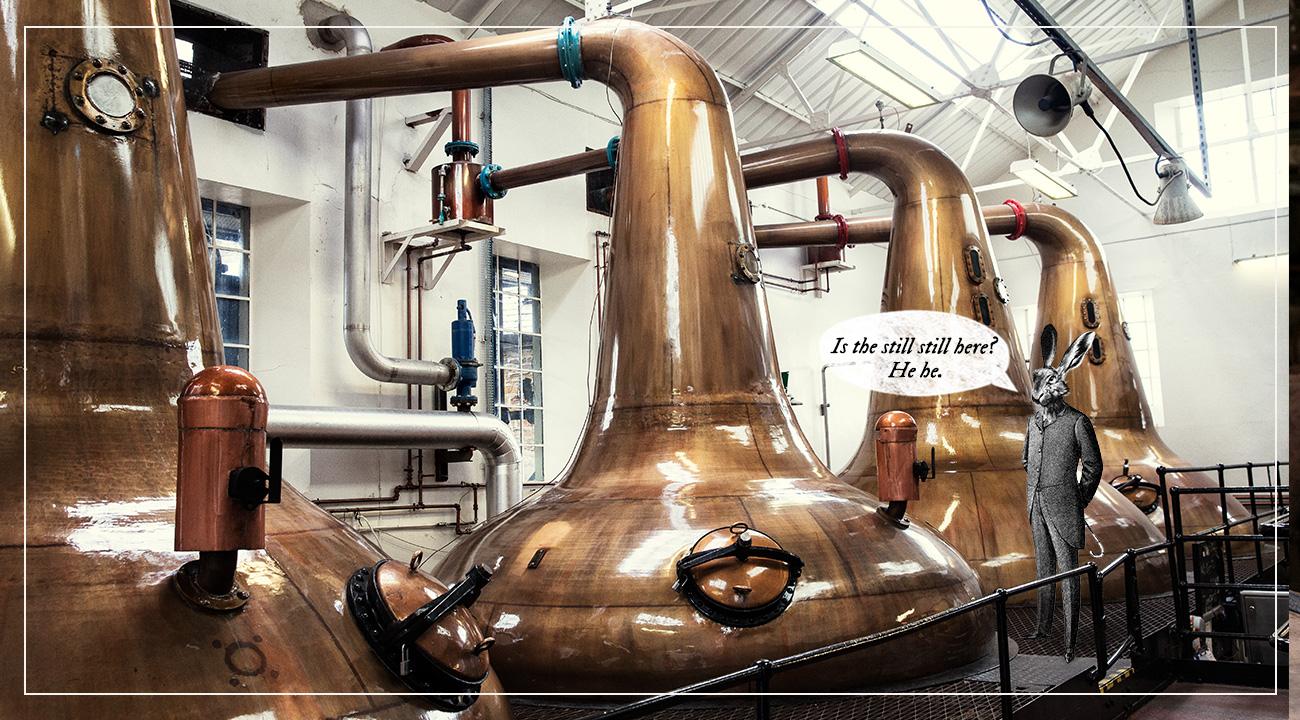 Because the temperature in Orkney makes it relatively consistent in the warehouses, you get a much slower, even maturation.

Tell us more about the 50-year-old Scotch by Highland Park.

Gordon: It’s a rich and intense flavor, light, with ethereal notes that you will only pick up in old Whiskies due to their age. So yeah, the 50-year-old tastes fantastic. And we've got some casks that we're going to be keeping back for a future, older release.

We just need to make sure they don't go too far and they don't lose too much alcohol. But watch this space.