Five Gins With a Big Heart 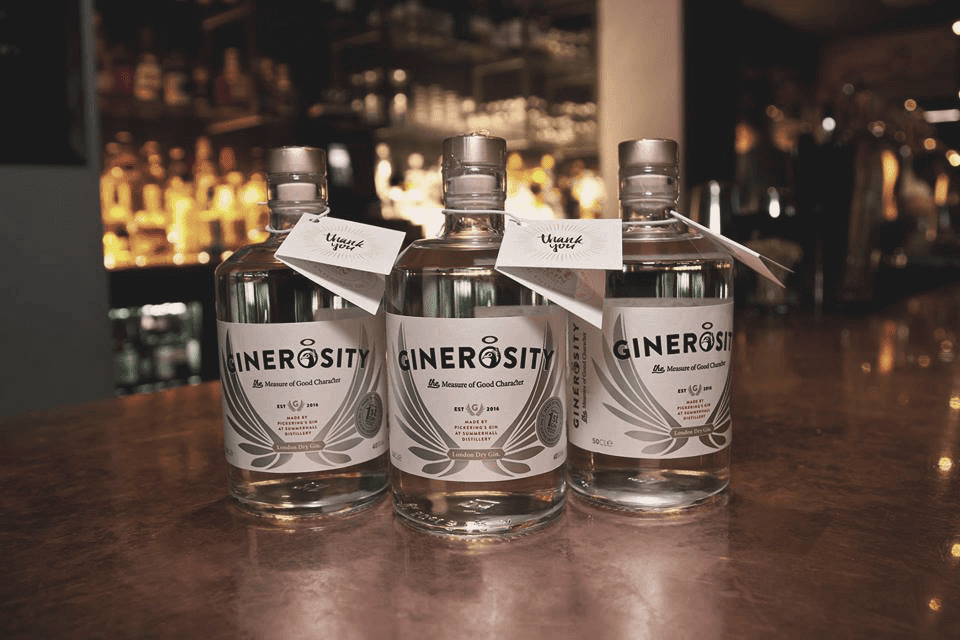 Ok, you know the feeling. You’ve had a delicious G&T. Maybe two. That warm, fuzzy sensation might be a sign you’ve over-indulged. Or is it?! These days, there are a number of Gins on the market that are upping their feel-good credentials by putting some of their profits and efforts into making the world a better place.
So you can blame that fuzzy feeling and warm glow on knowing you’re doing something positive, all by drinking your favourite tipple.

The brainchild of One Drinks - the UK’s leading ethical drinks company - One Gin was launched a couple of years ago and ensure that at least 10% of its profits goes towards funding clean water projects in the world’s poorest communities.

It’s made at the Blackwater Distillery in Sussex using a two shot method; the first is a traditional method using nine key botanicals (juniper, nutmeg, cassia bark, angelica, coriander seed, lemon, liquorice, orris root and orange) and the second is the addition of a quintessentially Britsh botanical - sage. The sage is foraged from the grounds surrounding the distillery.

To taste, it’s delicious, with sage really being the stand-out. The suggested serve is a G&T garnished with a wedge of fresh apple to lift the whole thing. Even if you don’t have the apple, this makes a great Gin drink.

Made in South London, Graveney Gin is a small-batch (just 30 bottles are produced at a time!) organic Gin made with fresh botanicals including pink grapefruit peel, fresh orange and goji berries.

A post shared by Graveney Gin Limited (@graveney_gin) on

Founder and distiller Victoria Christie’s love for gorillas began when she was growing up in South Africa, so it was always her ambition to give away a chunk of the profits from Graveney Gin to charity. 10% of all profits go to Gearing Up 4 Gorillas, a UK-based conservation charity that protects and cares for the rare mountain gorillas in the Eastern DR of Congo. To date, they’ve donated over £7,000 - not bad for a small-batch Gin.

From one conservation charity to the next; Elephant Gin was founded by three friends who were reminiscing about the ‘sundowners’ tradition of drinking G&Ts in South Africa. With a vision to conserve the wildlife they loved, they embarked on a journey to create a product to help secure the future of African wildlife. Elephant Gin was born. 15% of all profits go to three conservation charities dedicated to protecting African elephants. To date, over 500,000 euros have been donated.

Made in Germany, Elephant Gin combines traditional African botanicals (such as Baobab and wormwood) with classic Gin botanicals (like juniper and orange peel) and fresh botanicals including apples and lavender. Together, they create a zesty, spiced, well-rounded Gin.

Named after the island in the Outer Hebrides off the coast of Scotland where it's made, Isle of Harris Gin embodies true community spirit and sustainability. Its star botanical is sugar kelp, a seaweed which is harvested by hand locally. The harvest only takes place in spring and summer rather than all year round, so as not to over-harvest and disrupt the marine habitat and harm the local sea life.

A post shared by Isle Of Harris Gin (@isleofharrisgin) on

What's more, the distillery acts as a true beacon of the Harris community; showcasing local craft through opening its doors to visitors and the community alike. The folks at Harris have dubbed it ‘the social distillery’, to encapsulate the belief that the island's natural assets can be harnessed to bring its qualities to a global audience. One example of this is the distillery’s ongoing partnership with Harris tweed - a mutual promotion that will see the Isle of Harris Distillery Tweed launch this year.

Ginerosity is the world’s first social enterprise Gin. Profits from the sale of the Gin are donated to community projects to help disadvantaged young people in the UK and abroad through training, education and work opportunities.

A worthy cause, but what about the Gin? Made at the Summerhall Distillery in Edinburgh by the folks who make Pickering’s Gin, Ginerosity is a London Dry Gin. Made with juniper, coriander, angelica, citrus, lemon myrtle, heather, cardamom and cloves, the result is a well-rounded Gin with a crisp, dry finish.

So many good Gins, so many good causes! Have you tried any of these? Or are there any others we need to know about?