They Call Him the ‘Malt Chaser' 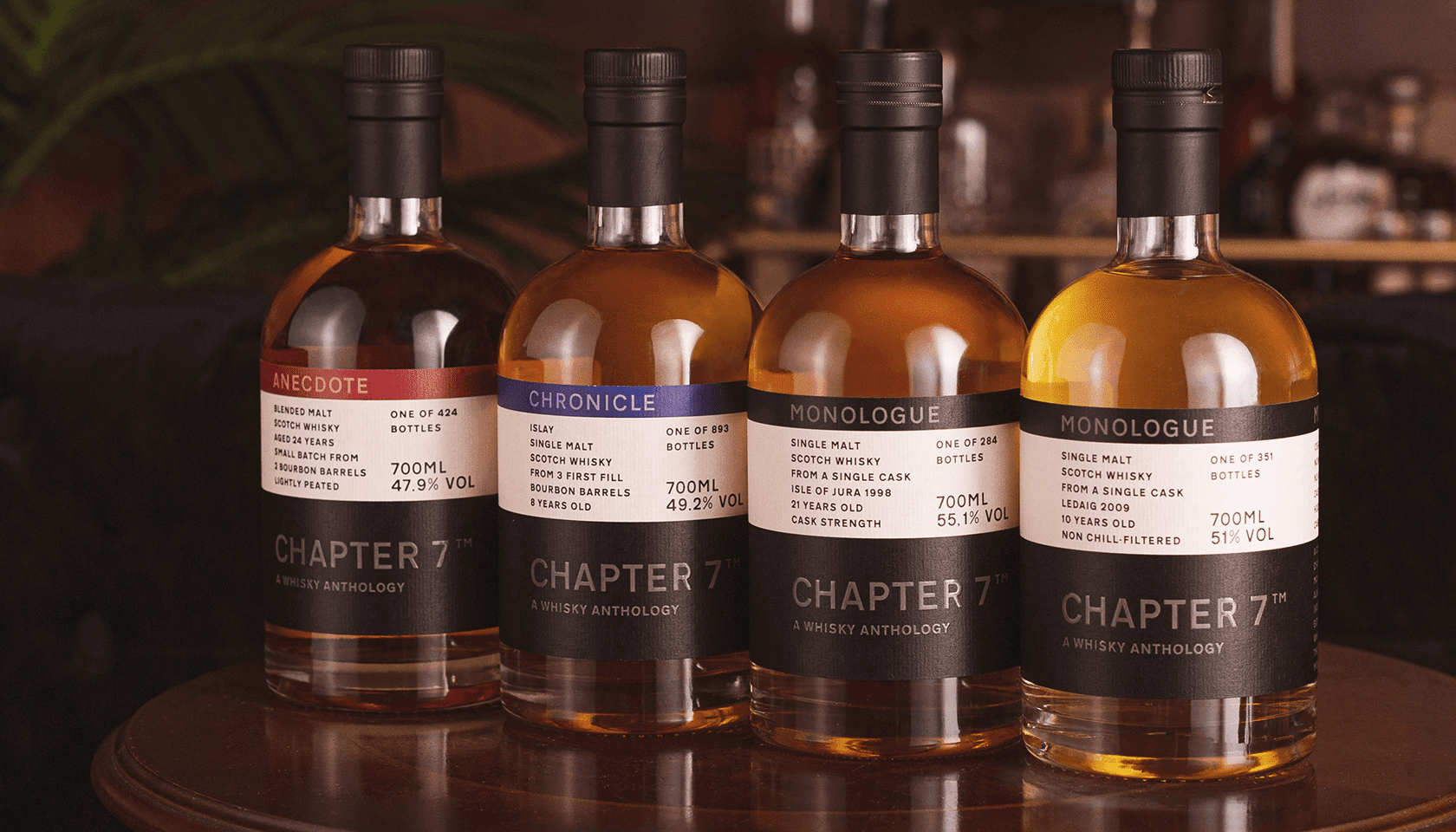 Selim Evin doesn’t make Scotch. Nope. He prefers to hunt it down. It’s a fact that’s earned him his nickname, the “Malt Chaser.”
“I have become the Malt Chaser. With everything happening in the Scotch/Whisky world, it's not an easy task to hunt down and find those special Whiskies to bottle,” says Selim. “I am constantly in contact with people and reviewing what is on the market or what is becoming available.”

The owner of independent bottling company Chapter 7, Selim’s lived and traveled all around the world, from places as far-flung as Kazakhstan and Switzerland. But it was his half-Scottish heritage that helped instill a deep love for Scotch at a young age and passion for finding some incredible juice.

We sat with Selim to talk about that passion and how it fueled the creation of Chapter 7, his search for unique juice and the secret to blending something you — and the world — will love. 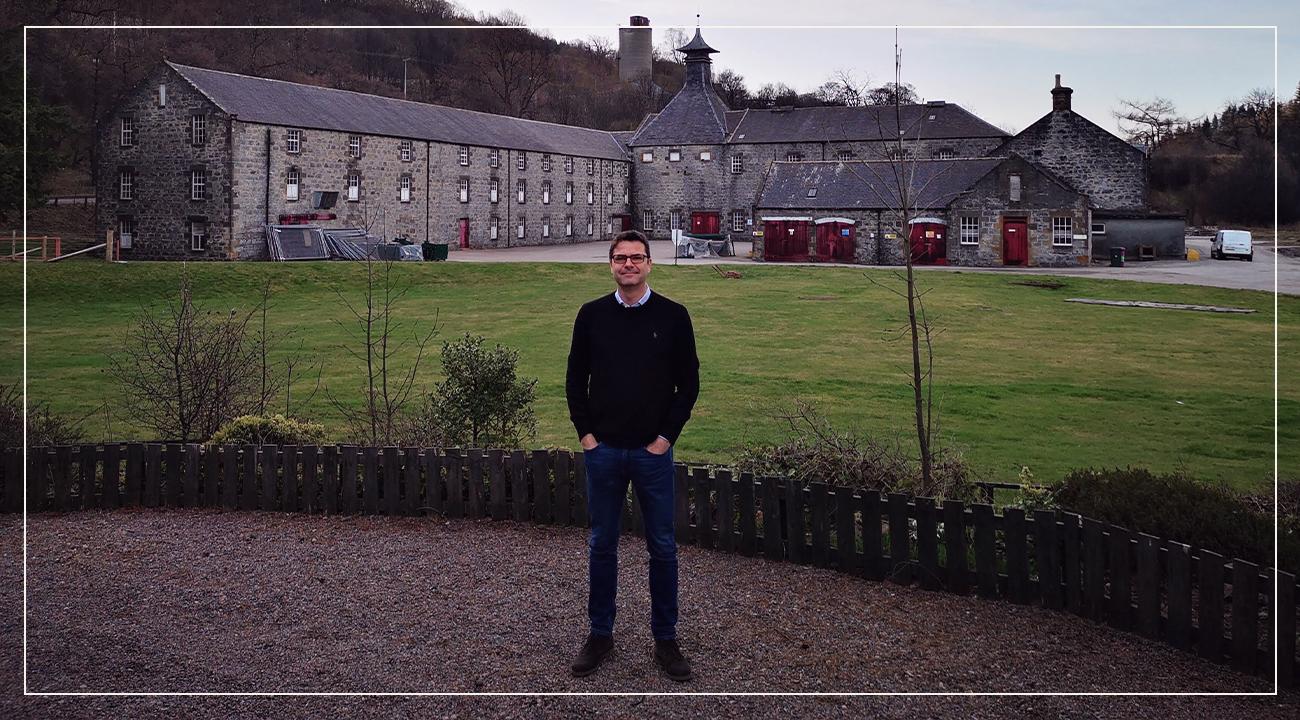 Can you tell us how your passion for Whisky developed?

Selim: I've been raised in an environment where Whisky was part of the life of the adults around me. Through my grandfather, I got involved in Whisky and I did my first distillery visit, basically, when I was 16 years old. It's a bit blurry because we went from the north of England, we crossed into Scotland, and went around for about seven to 10 days, popping into many places. That trip really left a mark that's stuck with me all throughout my life.

The easiest way to get into the Whisky world was to become an independent bottler.
When I was younger, about 24, 25, I started getting really involved in Whisky and trying new things. I was also working for a tobacco company and was responsible for duty-free. I saw a lot of things happening in the Whisky category, and I had a lot of access to special bottles and limited editions. So the idea was always there, but I didn't know how to jump into it. I started looking at [Whisky] again in 2011-12. 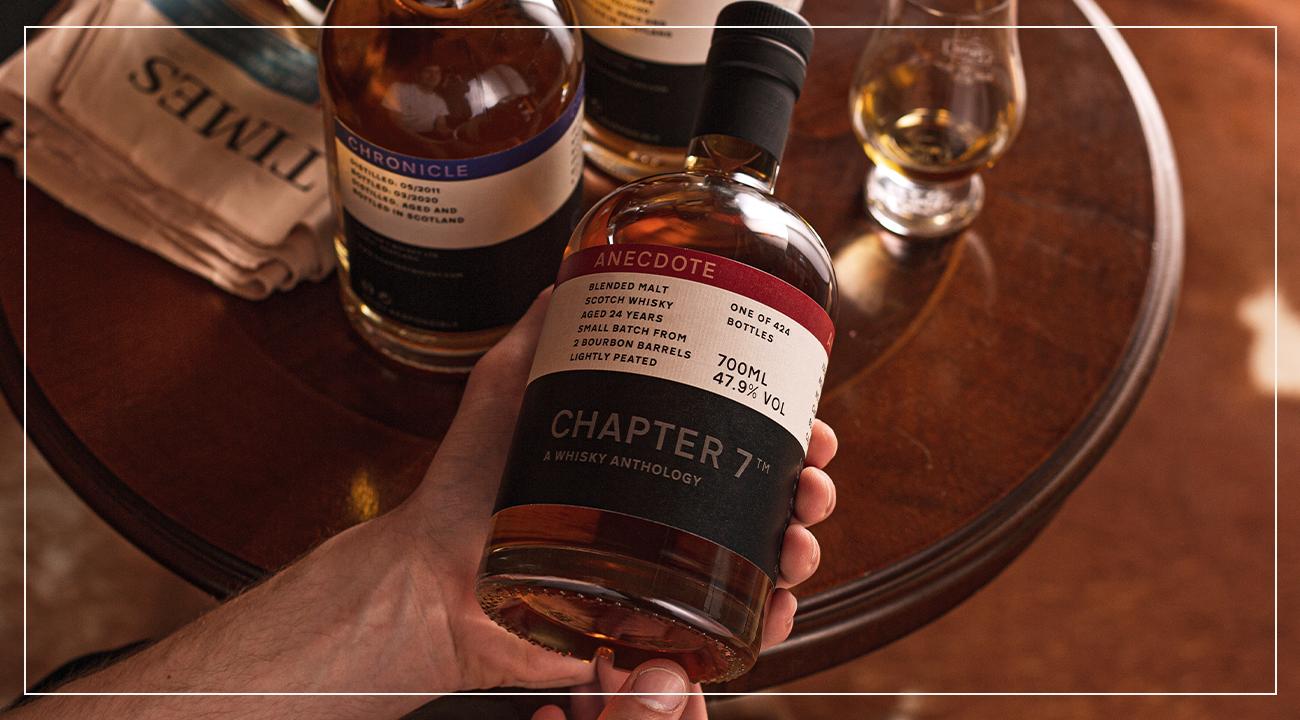 At that moment, I was in a completely different business, which was seafood processing and exportation. It was my own business. But in 2013, I basically handed over all my shares to my minority shareholder or partner and I took a break. At that moment I said, "Okay, this is the time. I want to do something that I feel passionate about for the rest of my life. I’m not going back into the corporate world again."

It's the curiosity in me that is fueling all this and the search for Whiskies.
And I just tried to do this. The easiest way to get into the Whisky world was to become an independent bottler. So I jumped into that, started contacting people and having meetings. I went to Scotland, I traveled around, I met some people at the beginning that I thought, "Okay, I've found the right people." I briefed an agency to create the brand as well. I started in November 2013 and I did my first bottlings in July 2014.

How does the history or backstory of a Whisky, or a specific cask, influence your selection?

Selim: Well, you always have names [of Whiskies] in your head that you would like to get your hands on. I also give some news to my contacts that I am after certain names or after a certain character of Scotch. But it all finishes when you taste it, because that's when the Whisky tells its story. When I started Chapter 7, it was all about putting lesser-known Whiskies or lesser-known distilleries in the spotlight, because I’m aware that there are wonderful Whiskies around that are known to very few people. 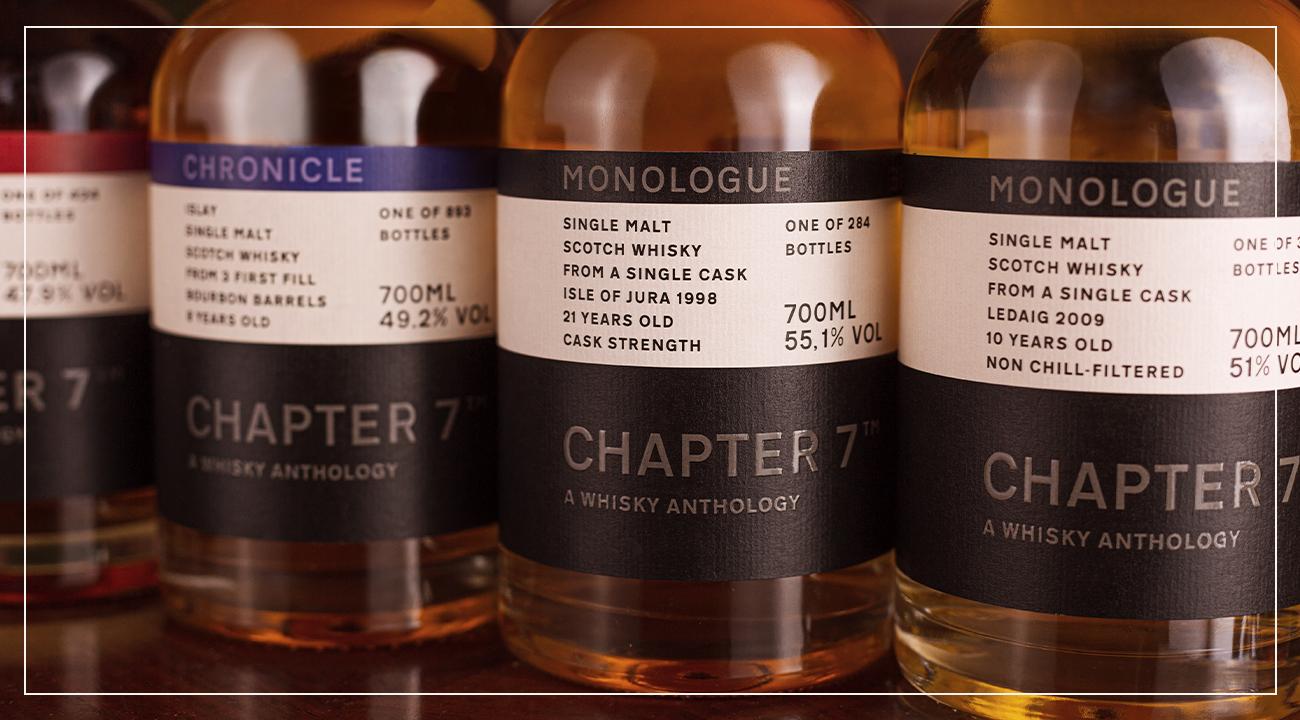 When I make my decisions, it’s always based on taste. That's the first thing. For example, in the last batch I bottled, there was a cask of Miltonduff. I mean, who’s heard of Miltonduff? But it got 91 points from Whiskyfun, and suddenly, it disappeared from the shelves because there are connoisseurs that follow certain reviewers. But if it weren’t for the review, that Scotch would have probably been sold in six months or something like that.

Through my grandfather, I got involved in Whisky.
When the taste is right, I then look into the history of that cask. As you speak to people who know better than me, through the history or history of certain distilleries, we discover the history of the casks and we can go back. Sometimes, you do blended malts and then from the mixture, you can trace the story back a little bit. It's a very interesting process in itself.

Selim: No, I don't try, actually. What I try to do is when I bottle a batch of five or seven casks, I choose the mix so that I have something for everybody. But it's not a taste profile. It's price-wise as well as taste-wise. So, for a five-cask batch, for example, I will try to choose a peated Scotch for the people who appreciate peated Whiskies.

And then I will try to put in a Sherry cask finish or Sherry cask aged Scotch for those who appreciate the Sherry. And then I would try to put a Speyside inside, etc. I try to have a different variety of casks. Do I try to choose things that everybody will like? That is quite impossible — I discovered that a long time ago. But I still make a lot in hopes that everybody likes my Whiskies.

1. If you could have any superpower what would it be?
It would be a superpower that would make my kids less noisy.

2. How would you describe Chapter 7 in three words?
Passion, curiosity and discovery.

3. What is your favorite music and what drink goes best with it?
That's a tough one. I love so many kinds of music. This nobody would know, but I'm crazy about Frank Zappa's guitar. But I also love jazz. And obviously, the best drink that goes with it for me is Whisky.

4. What would you eat and drink for your last supper?
I think I would have some lobster — baked lobsters with butter. Next to it, I would have a nice Islay single malt. Oysters as well. Lobsters with oysters is also lovely.

5. What was the first Scotch you had that made you fall in love with the category?
I think it was Clynelish. There are so many different Whiskies, but I think when I started drinking, it was Ballantines. But for me to get into single malts, Clynelish was so sweet and easy. A nice spicy Highlander — very nice rounded. So, I think it was a 14-year-old Clynelish original bottle.

In your own words, can you explain what an independent bottler is?

Selim: An independent bottler is a company or an entity that does not produce Whisky, but bottles Whisky from different distilleries under their own brand. That's the easiest way to put it.

What do independent bottlers bring to the industry and how do they enrich the whole Whisky ecosystem?

Selim: The blending process in the distillery acts like an equalizer and makes everything very constant and very consistent. What independent bottlers offer is another dimension to a Whisky drinker's life. Each cask can be so unique, that even if you know a distillery extremely well, a single cask may really shock you — you may not believe that it's coming from your beloved distillery. 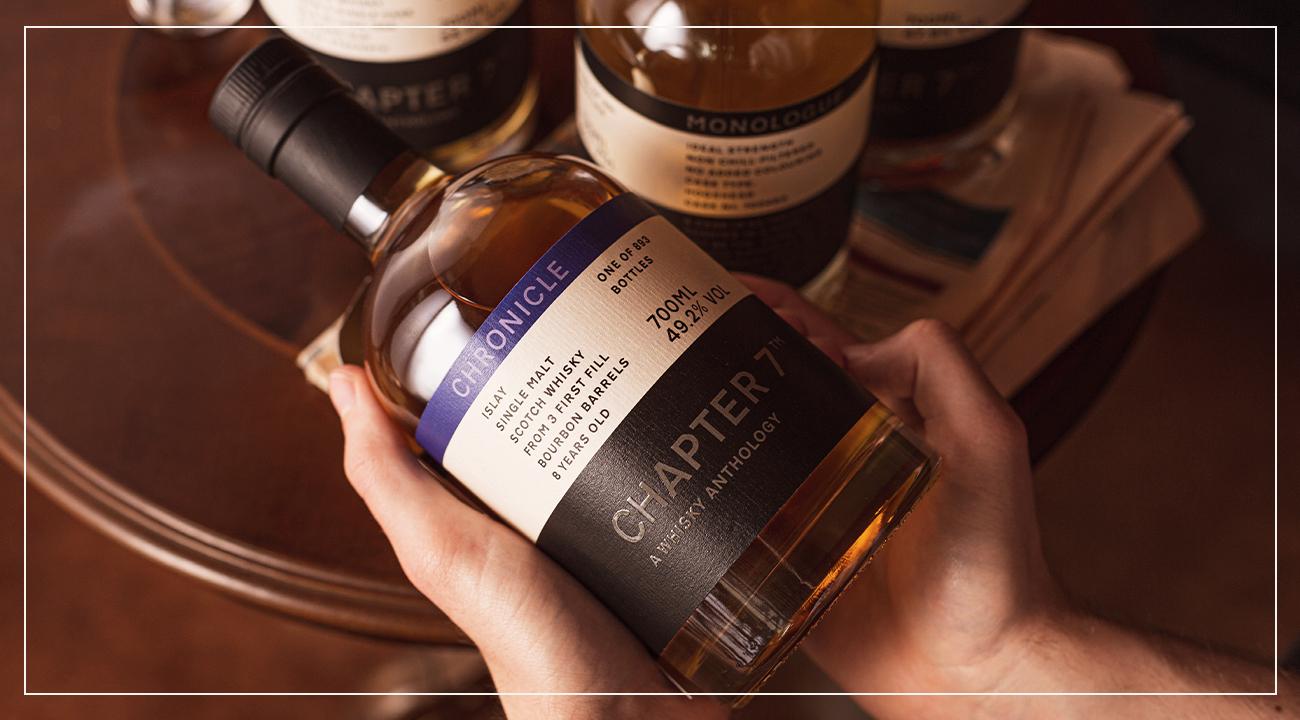 When you look into the history of independent bottlers, some of them operated as grocery shops. They would go to a distillery, buy their own casks of Whisky and then sometimes they would blend it in-house and offer it to their clientele. If they were successful, they had a lot of people coming and buying their blends because it was a proven, skillful artisanship.

What independent bottlers offer is another dimension to a Whisky drinker's life.
So I think that's what independent bottlers are offering — it's also sometimes a bit more innovation. In the last couple of years, the distilleries have become very, very innovative. Before that, there was always a gap. The smaller, independent bottlers had more flexibility to do smaller batches, and try some different things. They provide access to a completely new world of Whisky.

How do you compromise between price and quality? What drives you to help people discover the best Whisky at the best price?

Selim: Ooh la la. Tough. It's a difficult thing to put a price on, first of all, because there's a very long time involved in making a Whisky. I can't put a price tag on it, but for people to discover Whisky, the usual route is to first go with original bottlings. The original bottlings will carry the best price-quality ratio.

Do I try to choose things that everybody will like? That is quite impossible — I discovered that a long time ago.
But when you expect more and when you're more on a search, then the price tag becomes more important because you go after the more unique expressions, maybe older stuff, or stuff that is out of the ordinary. And there's always a price for rare, unique and out of the ordinary Whiskies. So I think it all has to do with your taste and your willingness to pay for the things that you want to reach out to.

How do you reconcile personal choice preference with what you know fans of Chapter 7 will enjoy?

Selim: It's a mixture of everything. I need to make my job more interesting. That's one of my motivations — it's the curiosity in me that is fueling all this and the search for Whiskies. But I always try to keep a balanced portfolio. 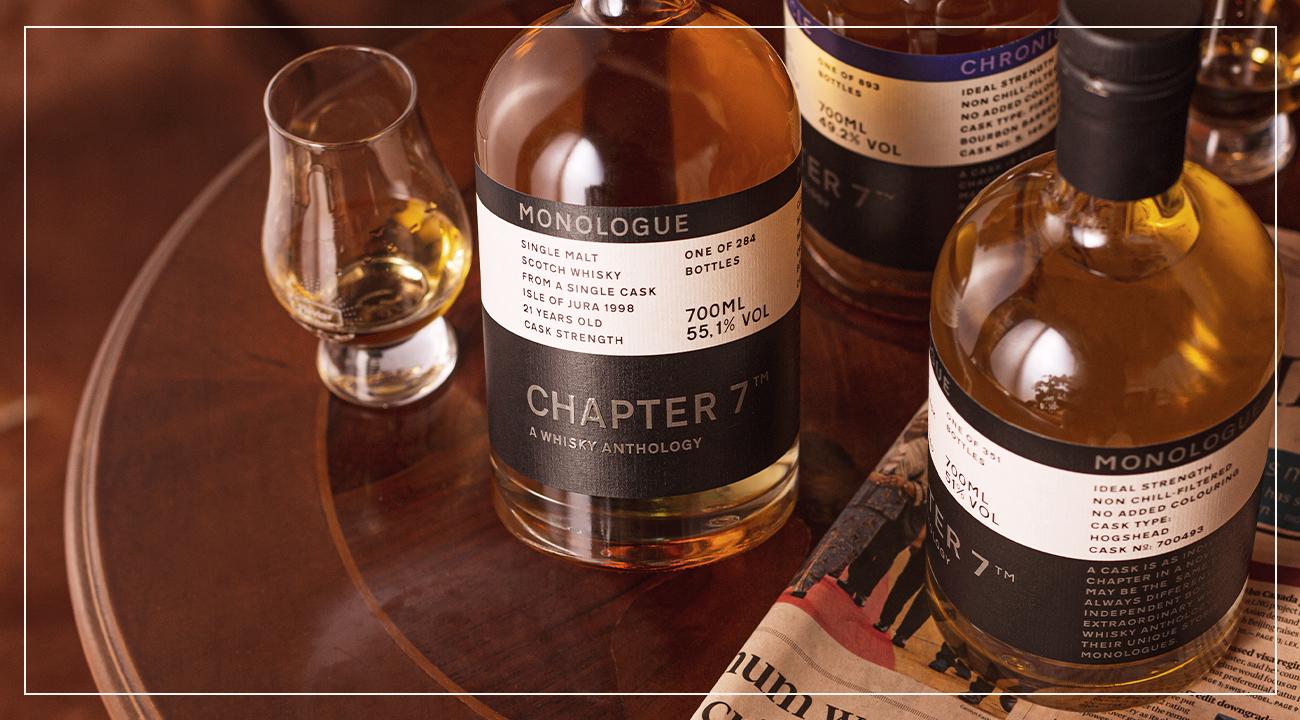 With Chapters like, Monologue, Anecdote and Chronicle, what can we expect in future Chapters?

Selim: The Monologue range is all about single casks, where we let a single cask take the stage and tell its unique story. The Anecdotes are small batches that are coming only once — they're not going to repeat themselves. That is the playground for the Malt Chaser to also try different things and come up with small batches of crazy experiments. 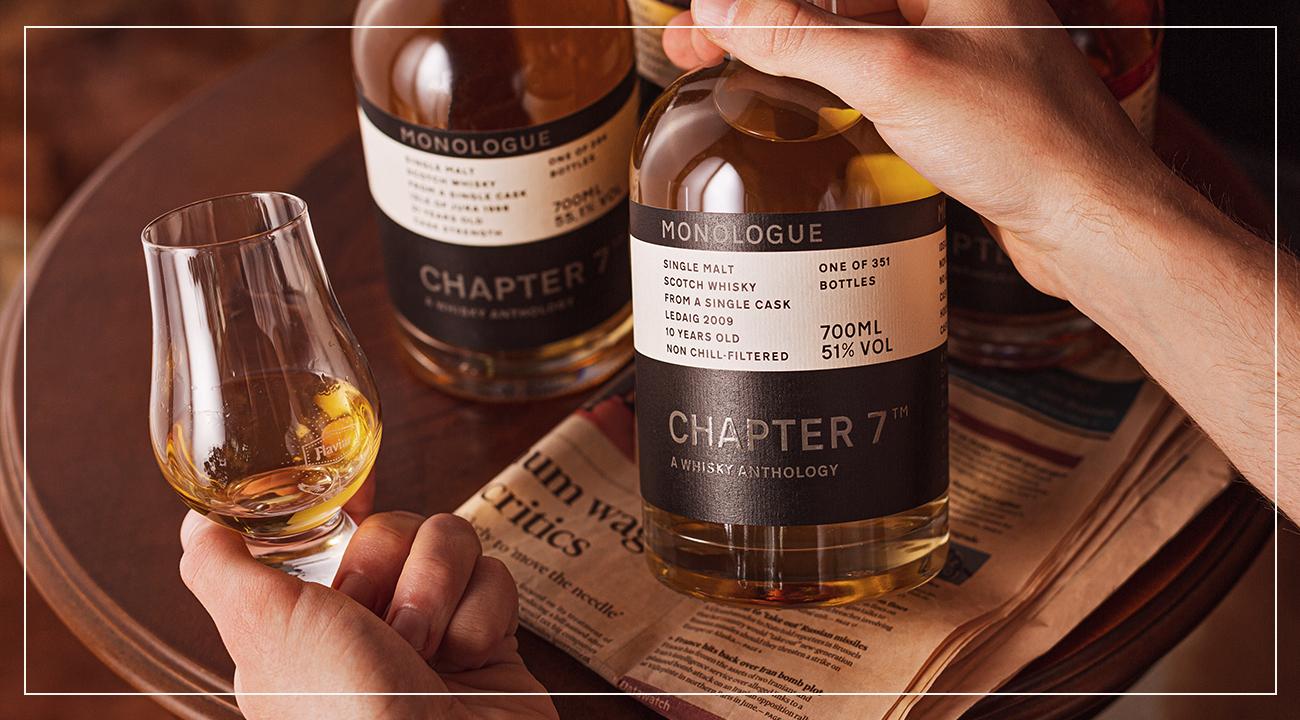 And then Chronicle is ongoing small batches of a single malt or a blend of malts. Our new line, the Prologue, will be an extension to the range that will cover Whiskies that are at an age where they start to develop their complexity and at the beginning of their lifecycle, becoming complex and rounded. So it's going to be young Whiskies but with exceptional regional or distillery character.
Read more about:
Published Oct 14th 2020
By Jackie Gutierrez-Jones