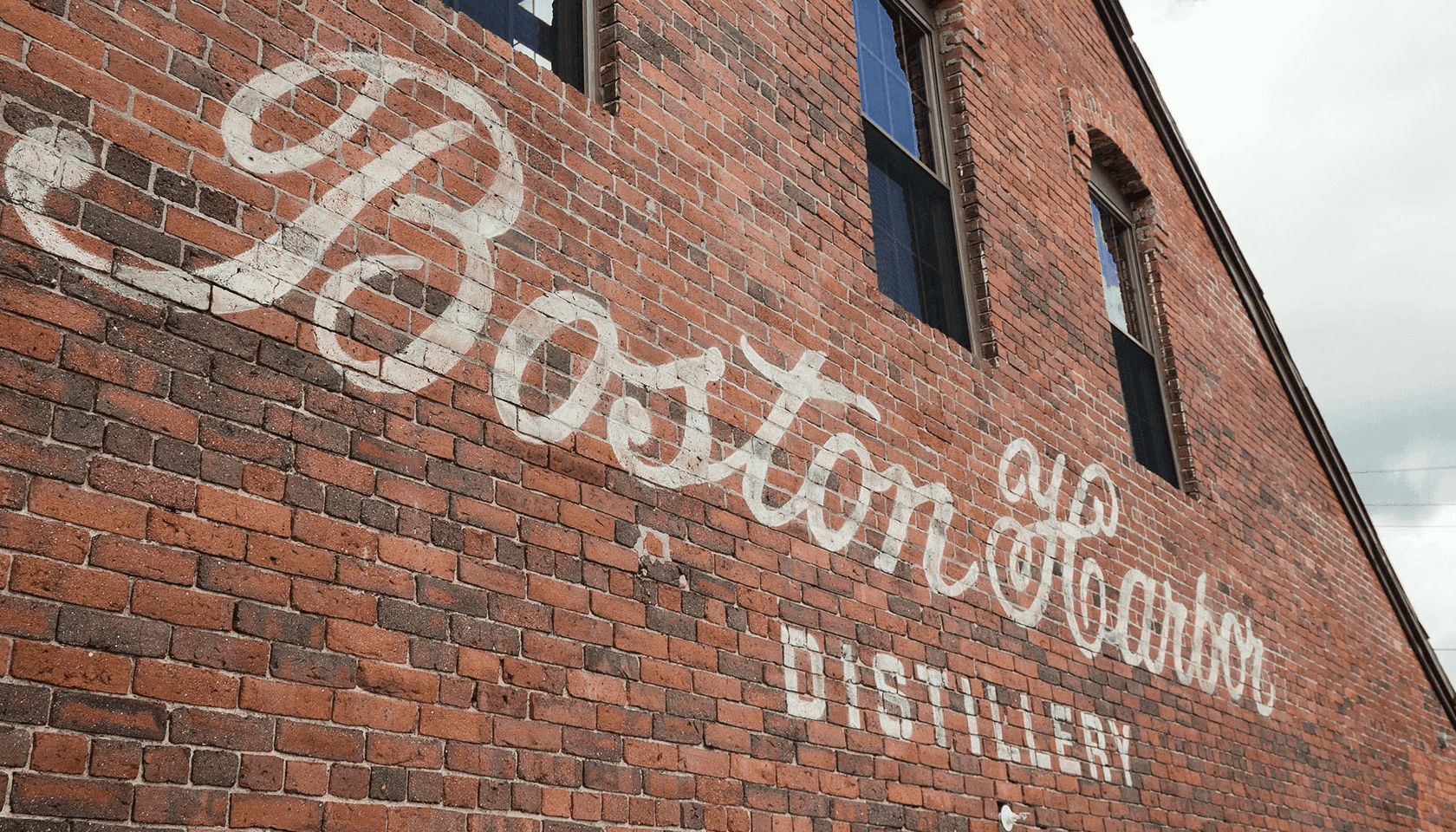 It was rumored that long ago there was someone who could turn water into Wine. But Beer into Whiskey? Well, that’s just crazy talk. Or is it...
Turns out, there’s some truth to that tale. Just ask the Boston Harbor Distillery. Headed up by Rhonda Kallman (the co-founder of Boston Beer Company and The Institute for Brewing Studies’ “Pioneering Woman in the Beer Industry”) and master distiller John Couchot, Boston Harbor is taking Beer—Sam Adams Beer, to be exact—and turning it into an 84-proof Spirit that defies palates.

If you couldn’t already tell, this isn’t your typical distilling story.

So we sat a spell with these two Boston trailblazers to find out what makes Boston Harbor—and their product—tick.

Rhonda: When I was in the craft Beer movement, it was very exciting. But in some ways, it was a little bit easier than the Spirits movement. Take Samuel Adams Boston lager, for example. On the east coast, there was nothing like it. It was a very pale, bland landscape of pilsner Beers that all were corn-based and tasted the same. So, it was exciting, because you could literally see the difference. 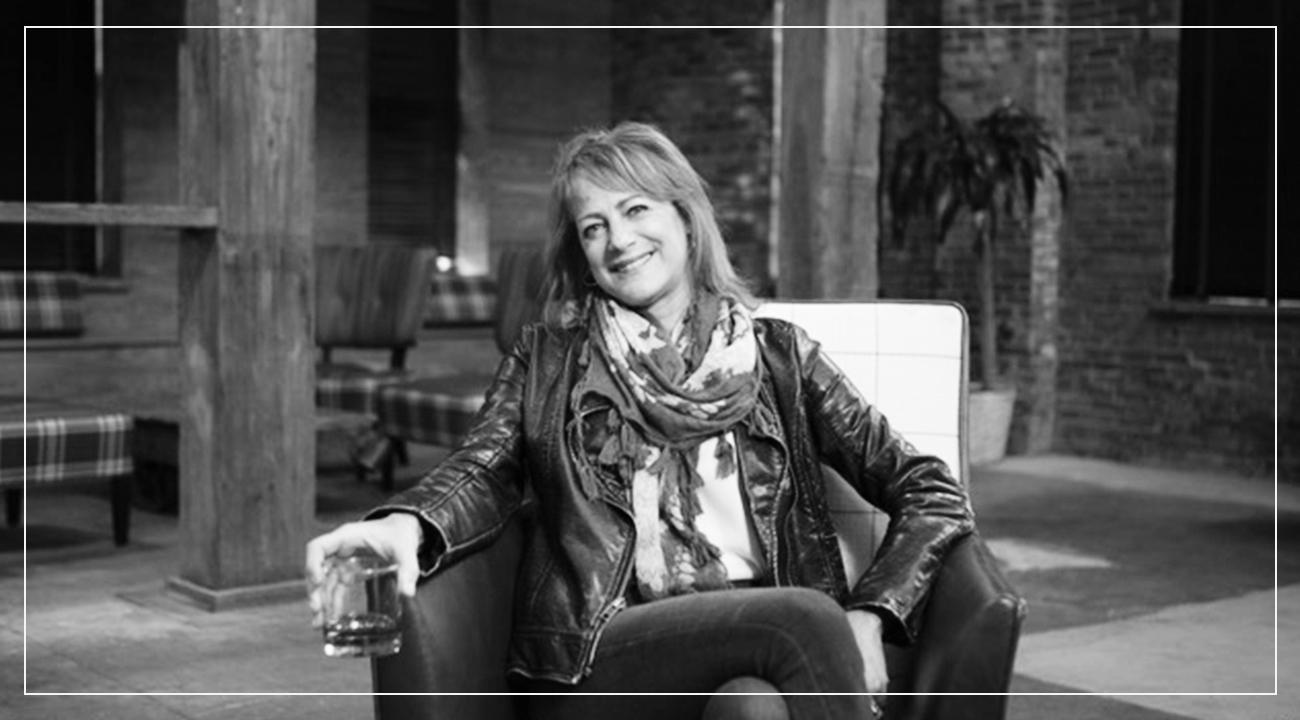 It’s hard in the Spirits business because you can’t really see the difference between what the big guys are making—inexpensive alcohol that doesn’t taste that good—until you buy that bottle and crack it open. And that's been harder for me. But the parallels are definitely there, starting with Wine.

You can’t really see the difference between what the big guys are making—inexpensive alcohol that doesn’t taste that good—until you buy that bottle and crack it open.
The premiumization of Wine started decades ago. And once upon a time, 80% of Wine was jug Wine—cheap, industrial-like Wine. And now, 80% of them are small, independent boutique wineries. And that's what's happening with Beer and Spirits.

How has your history influenced the products you are producing?

Rhonda: For me, quite a bit. It goes back to that ingredient story. I mean, the first Whiskey that we made was our Putnam New England Single Malt. And that, to me, was the stake in the ground for the distillery. American Beer used to be a joke and now it's highly regarded around the world.

Bourbon is clearly American, but it has to be made with a majority of corn. And craft Beer was sort of anti-corn—that was really the difference in the craft Beer, all that malt. So our Putnam New England Single Malt was really our way of saying, "watch out, Scotland. Americans can make great malt Whiskey too."

Tell us a bit more about some of the products in your line up.

John: Rhonda, do you want to take the Rye and I'll take the malt?

Rhonda: Well, we just talked about the malt. You want to talk about the Spirit of Boston?

John: Well, then, yeah. Spirit of Boston—that's a beautiful story. You want to start and I'll go into the process? 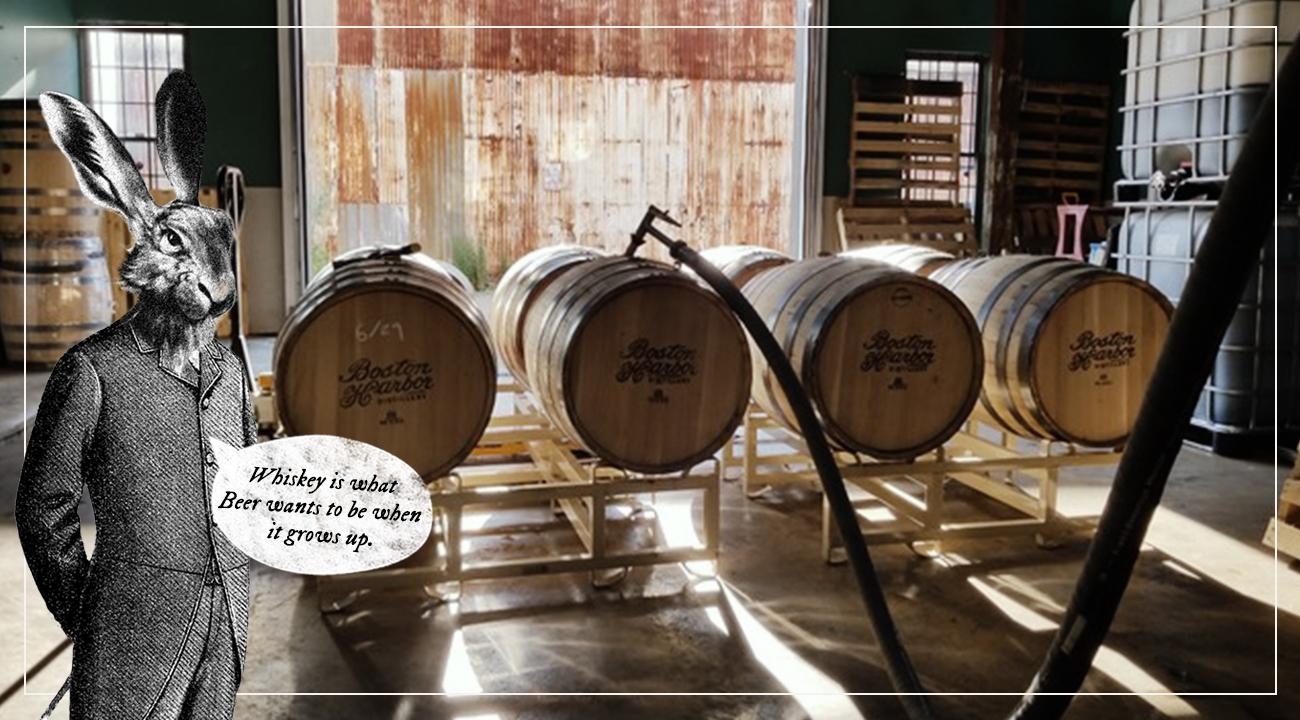 Rhonda: When we were building Boston Beer Company, John said, "Hey, you know Jim Cooke. Why don't you call him up and get some Beer that I can distill?" And so what started out as an experiment for me has become this amazing award-winning innovation called the Spirit of Boston [Editor’s note: The Spirit of Boston line is a series of limited-edition Spirits distilled from Samuel Adams Beers.]

A lot of people say you can't distill hops, which I found to be not true at all. In fact, you get these beautiful floral flavors.
John: One of the inspirations behind the Spirit of Boston was honoring Rhonda's legacy with Samuel Adams. They have a lot of sizzle Beers that have amazing flavors. Some of the ones we've done are the New World Tripel, the Thirteenth Hour Stout and the Merry Maker.

A lot of people say you can't distill hops, which I found to be not true at all. In fact, you get these beautiful floral flavors, especially with the Tripel. You get some citrus and other earthy flavors that come through beautifully and are balanced well by the malt that they use.

My personal favorite, as Rhonda knows, is Merry Maker, made from a spiced Christmas stout. The spice comes through so beautifully. And with the barrels that we use you get a caramel and vanilla that balance the orange and other spices. And I got to say, I think it's one of the best things I've ever made in my career and I love it. 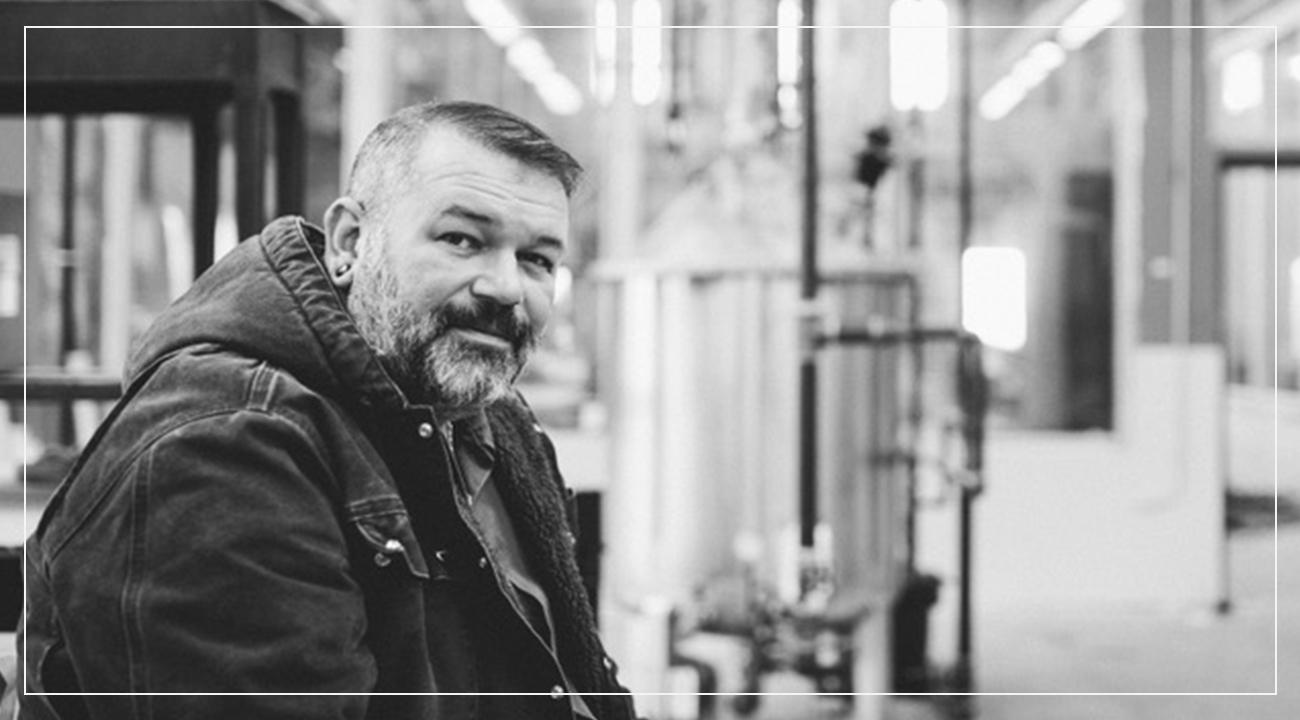 Okay, pick one of your Spirits and tell us what we’re eating with it.

John: The Merry Maker goes really great with any kind of dessert or like, a roasted pear with caramel sauce or honey. The New World or the Tripel go really well with sharp cheeses.

Rhonda: We actually make Bloody Marys with the New World Tripel. It is the best Bloody Mary ever because the concentrated hop character comes through and anchors the cocktail in a wonderful vegetative way.

Would you say that your audience is more of an adventurous sort of drinker? How would you describe them?

Rhonda: Well, it's a Whiskey for craft Beer lovers and a Beer for Whiskey lovers. It's those people that seek out different flavors and really are mindful of their experience that they're having. It's not an alcohol delivery system—it’s much more interesting than that. 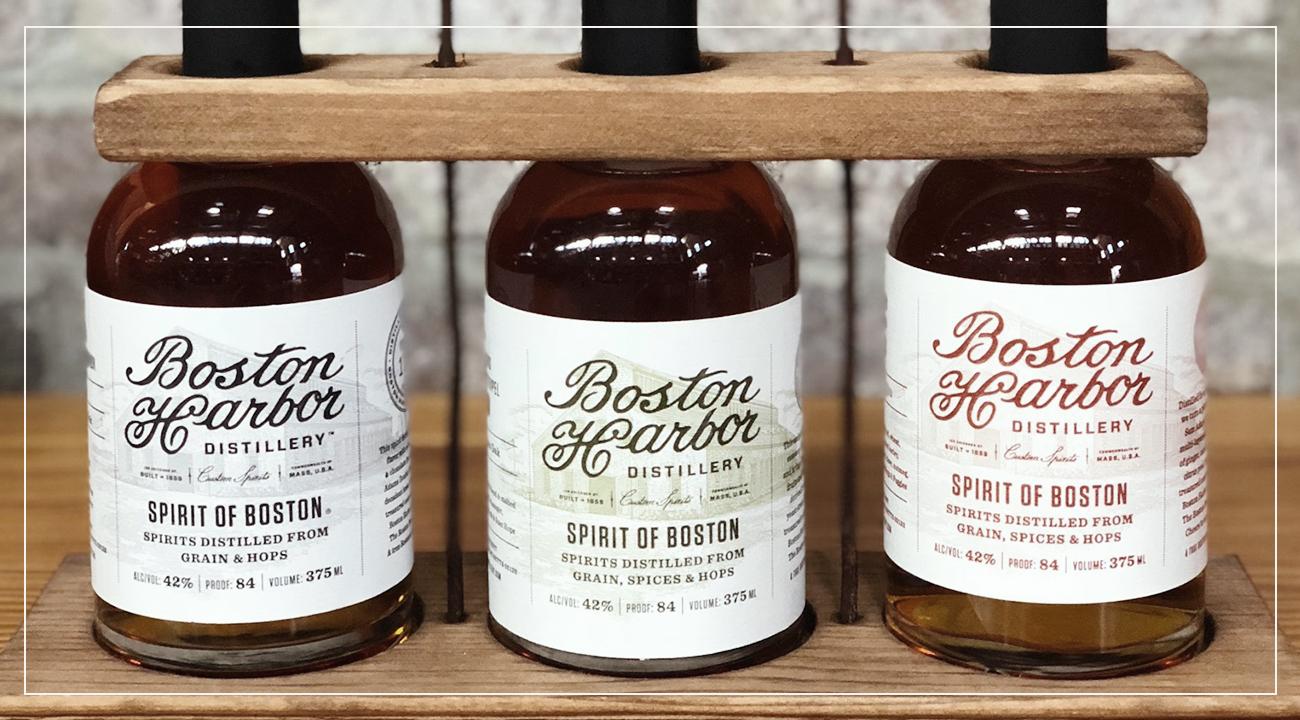 What role has the city of Boston played in the development of your distillery and your products?

Rhonda: I'm born and raised in Boston, and I've always lived within 20 miles of the distillery. Boston is a really remarkable city and I'm very proud of it. It was just voted the fourth best drinking city in the country. But frankly, it's very hard to break through in Boston.

Boston is a very, very proud city—lots of educated consumers here and that's good for the type of products that we offer. We have our craft disruptors. We have what's called Boston Harbor Maple Cream and Coffee Liqueur and those right after Kahlua and Baileys, for example. They're just a better play on old mature brands—a much better play. They're delicious. 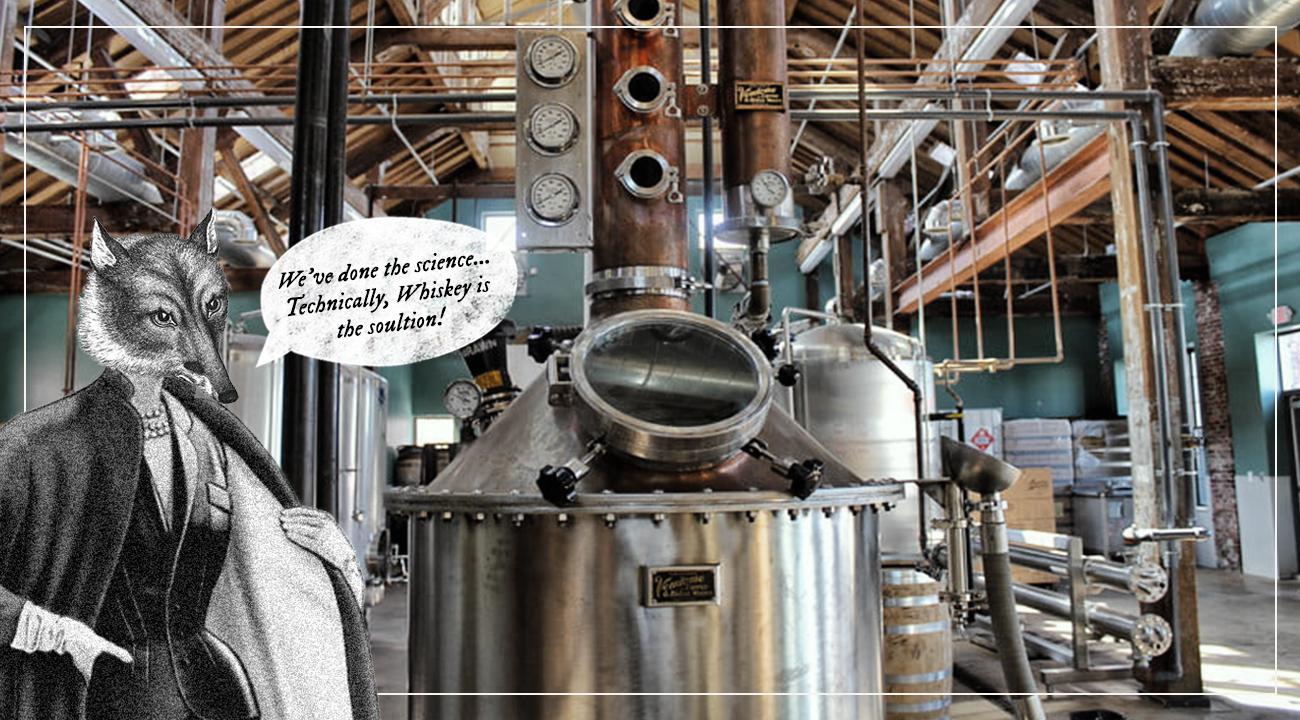 John: For me, Boston is the center of innovation. You have great schools and great colleges that are the forefront from biotechnology, engineering, design—you name it. And there's no better place to be at the forefront of innovative distilling but Boston.

If you could have one superpower, what would it be?
Rhonda: Wonder Woman. I love her. She was...
John: Yeah, I was going to say. You're already there, Rhonda. For me, it’s X-ray vision and heat vision. I want heat vision so I can heat distill that way.

How would you explain the Boston Harbor Distillery in three words?
Rhonda: Passion refined grittiness.
John: You know, I can only come up with one and that's “epic.”
Rhonda: Woo, Johnny.

What is your favorite music and what drink goes with it?
Rhonda: I love rock and roll and Whiskey.
John: Old school punk and Whiskey.

What would you eat and drink for your last supper?
John: Oh, wow. That's a tough one. For me, it would be either oxtail with the Putnam Single Malt or duck confit with the Putnam Single Malt. Ooh, and the Merry Maker. Can I throw in two? I want two.
Rhonda: Well, I want a five-course dinner paired with all Boston Harbor Distillery products. But if I had to pick one, I think it'd probably be a rack of lamb and Putnam Rye.