There Are Strict Rules For Making Scotch. This OG Distillery Bends Them

Published in:
By Jackie Gutierrez-Jones
Even if you’ve never been to Scotland, you probably know Glenmorangie for their stand-out innovation in the field of... basket weaving.
Kidding. It’s Scotch. Clearly.

So we sat down with Dr. Bill Lumsden, Director of Distilling, Whisky Creation and Whisky Stocks at The Glenmorangie Company to find out how this venerable distillery stays relevant and keeps things interesting for both its loyal fan base and new customers. 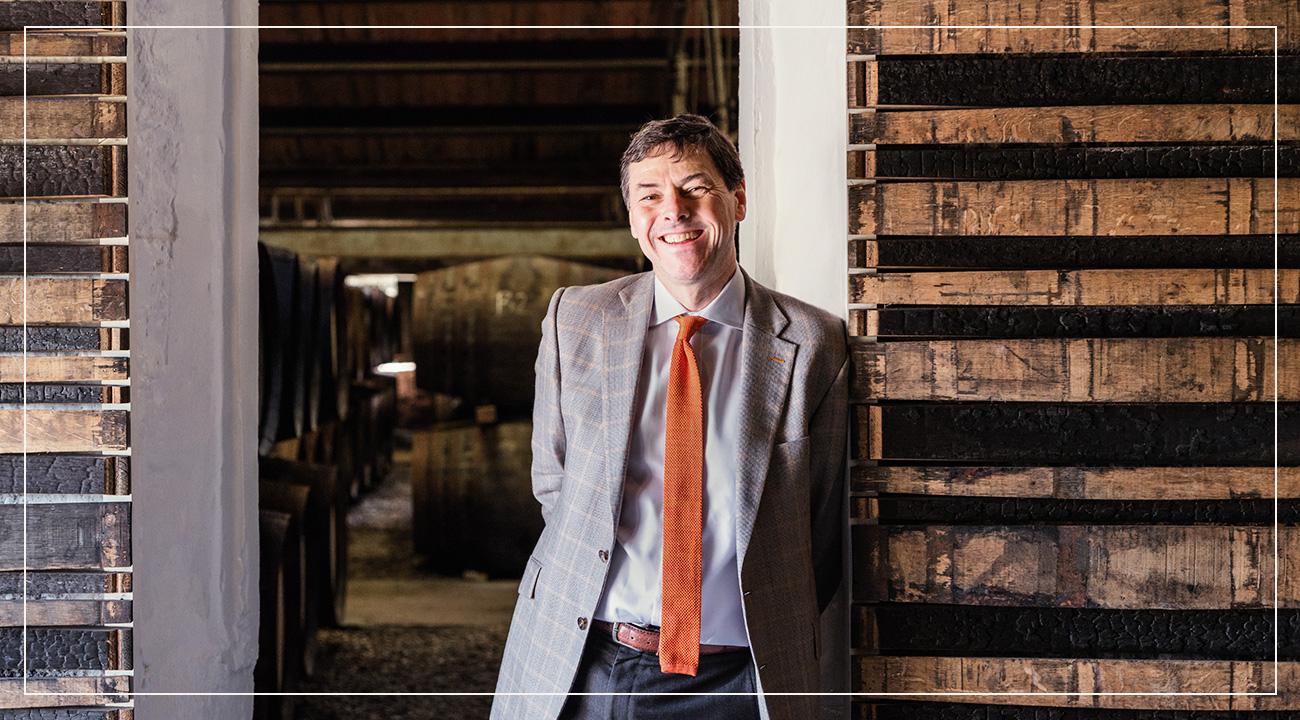 After all, he’s the guy responsible for designing all of the Whiskies made at Glenmorangie and Ardbeg while overseeing their production to the highest possible standards.

It’s a big job. But we’re fairly certain he’s up to the task.

Tell us more about Glenmorangie. It’s a company with a long history in the industry.

Dr. Lumsden: The Glenmorangie distillery was founded in 1843 and is located in the Highlands of Scotland, right on the banks of the Dornoch Firth. We’ve been creating Single Malt Scotch Whisky for more than 175 years. 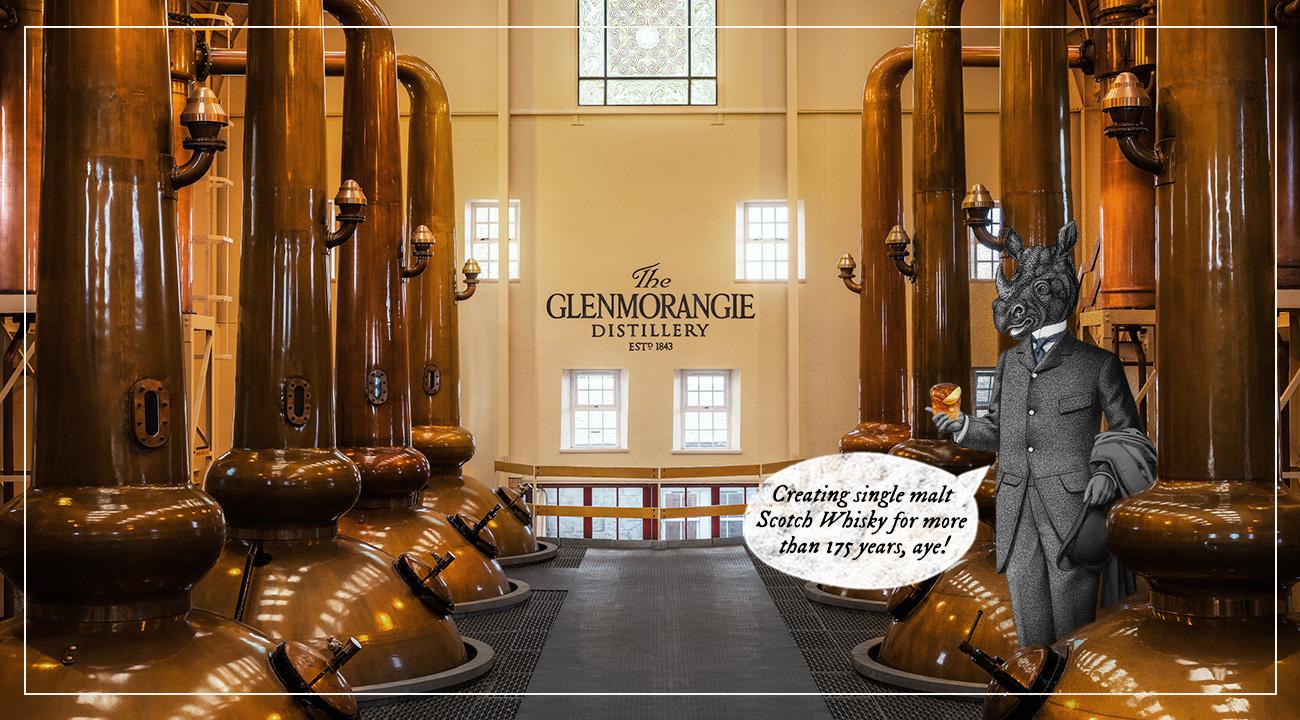 The Whisky we make is distilled in the tallest malt Whisky stills in Scotland for a purer spirit. Then, it’s expertly matured in the finest oak casks for great depth before being perfected by the Men of Tain [a skilled group of craftsmen entrusted with creating the singular taste of Glenmorangie], who have passed their skills down the generations, often from father to son.

How did you end up becoming a Master Distiller?

Dr. Lumsden: That story goes back over 30 years. I was studying for my PhD in microbial physiology and fermentation science in Edinburgh, having already completed my degree in biochemistry. I was at a party when a friend said, “Bill, have a Whisky,” and he handed me a glass.

From then on, I was intent on learning more about the world of Whisky, and I set my course to join the industry — first as a research scientist, later as a Distillery Manager and, eventually, as Glenmorangie Master Distiller. 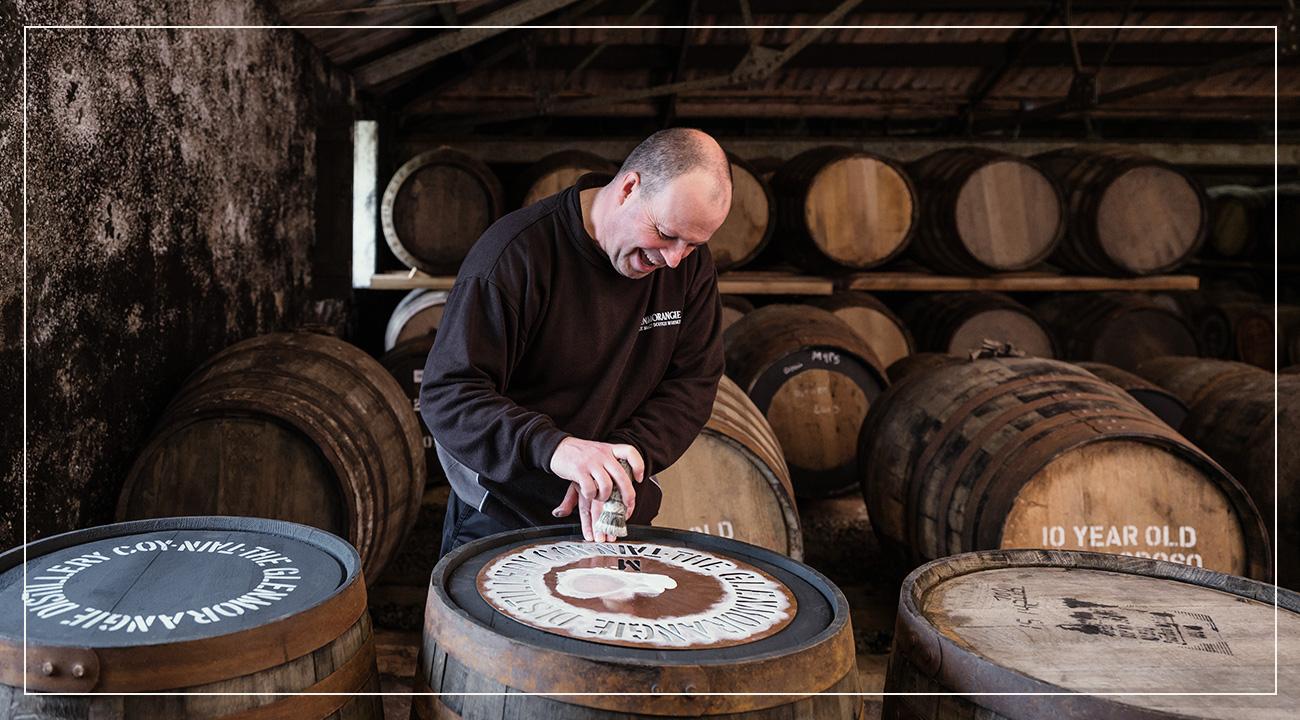 Glenmorangie is a company with a tremendous history in the business. How do you reconcile such a tradition with the experimentation and innovation that you are dedicated to?

Dr Lumsden: I’ve been with The Glenmorangie Company for almost 25 years and one of the reasons for that is the freedom I have to indulge my scientific imagination and experiment.

We were among the first to perfect the art of wood finishing three decades ago.
We are an industry bound by strict rules on the ingredients, raw materials and processes we can use, which makes experimentation challenging but very rewarding.

I’m proud to say that Glenmorangie has been at the forefront of innovation within the Scotch Whisky industry. We were among the first to perfect the art of wood finishing three decades ago and we’ve continued to maintain our reputation as innovators ever since.

This year, for example, we were the first Scotch Whisky to use wild yeast in the fermentation stage, resulting in our tenth Private Edition, Glenmorangie Allta.

1. If you could have one superpower, what would it be?
The ability to put words in other people’s mouths. I’d have a lot of fun with that!

2. How would you describe Glenmorangie in three words?
Elegant, complex and delicious.

3. What is your favorite music and what drink goes with it?
My favorite music is Latin American jazz. When I’m listening to it, I generally have one of the richer Glenmorangies, such as Lasanta or Signet, not least because I’ll probably be enjoying a Montecristo No. 3 with it as well.

4. What would you eat and drink for your last supper?
This is a tricky one to answer because I have pretty eclectic tastes in food and drink. However, my last supper is likely to involve foie gras, fresh Scottish langoustine and a whopping bone-in ribeye steak. My aperitif would be Glenmorangie Original, perhaps with soda. I would follow it with some Mersault or Montrachet white Wine, then I would have some Vega Sicilia Unico red wine with the steak and finally, a Glenmorangie Signet before I get taken away to heaven or hell.

5. Assuming Glenmorangie is your favorite, what's your second favorite Scotch?
Guess what? It has to be Ardbeg!

Tell us a bit more about Glenmorangie’s The Original. What is the flavor profile? How did it become the flagship expression of the company?

Dr. Lumsden: The Original is probably our most famous expression, and it’s the heart and soul of our family of Whiskies. This unique ten-year-old Whisky is produced by marrying the delicate spirit that emerges from Scotland's tallest stills with first and second fill American white oak casks, bringing flavors of mandarin and peaches softened by vanilla, alongside herbal and floral notes.

It’s been described by Jim Murray in his Whisky Bible as “complexity at its most complex.” 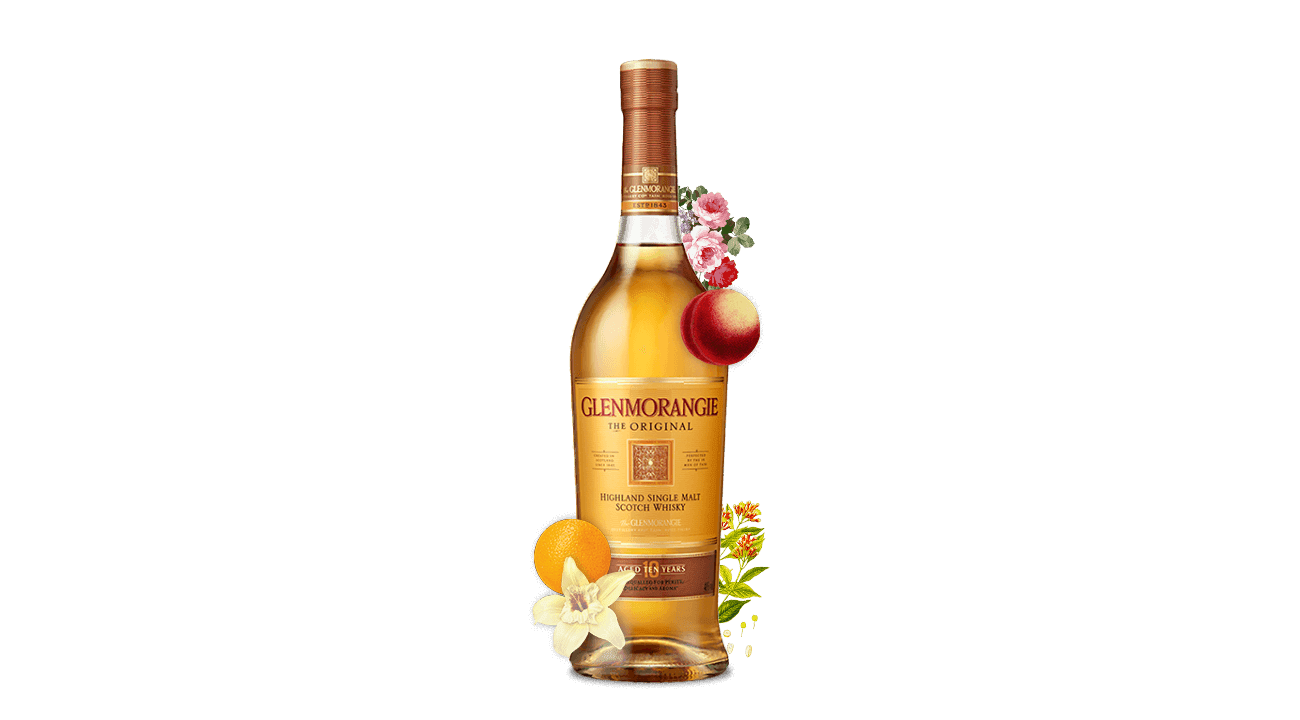 The Original came by its name because it is, quite simply, the best representation of Glenmorangie’s signature house style. Whatever wonderful experiments we dream up, this is the standard by which we measure everything we do.

Let’s talk about The Lasanta expression. What makes it special?

Dr. Lumsden: The Lasanta is a very rich and spicy Whisky, with a raisin-y intensity that comes from its sherry cask finish. 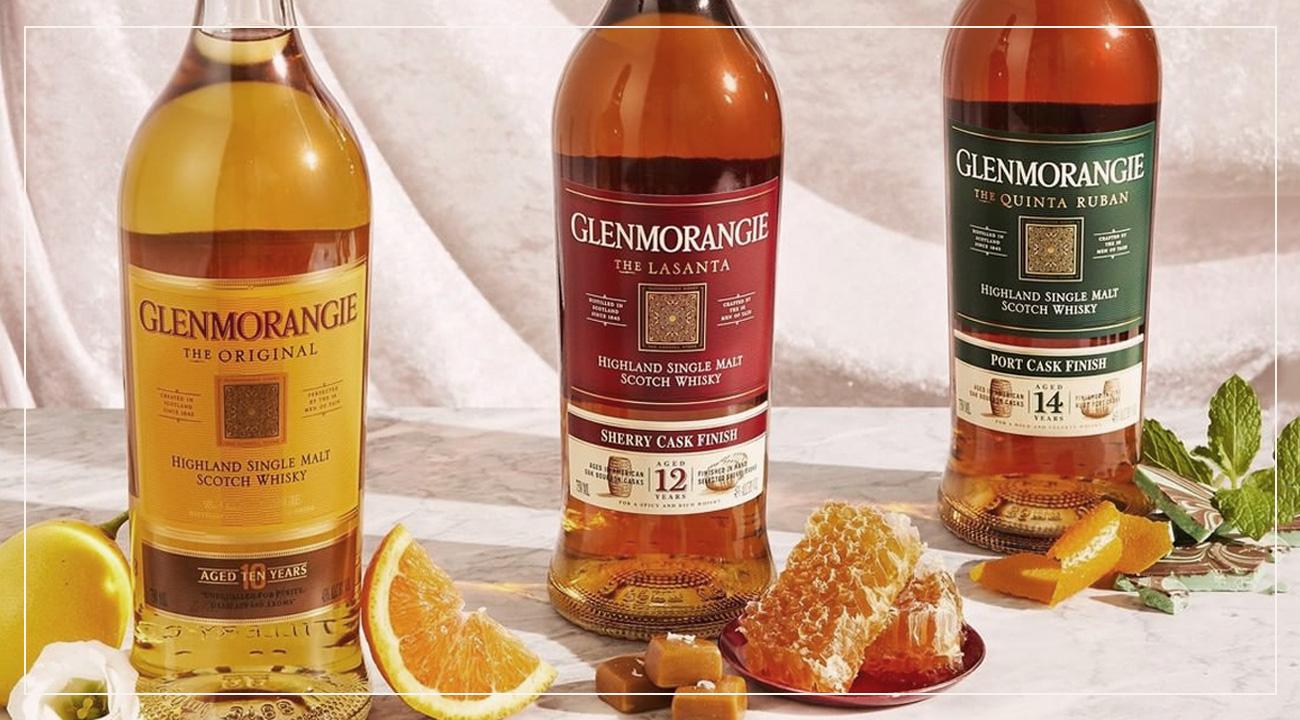 To create The Lasanta, we first age our signature expression in American oak ex-Bourbon casks for smoothness. We then finish the Whisky in the best hand-selected Oloroso and Pedro Ximénez casks from Jerez, which brings full-bodied richness and wonderful flavors of toffee, ginger and dates.

What foods pair best with The Original and The Lasanta?

Dr. Lumsden: Glenmorangie Original’s light citrus, vanilla and fruity notes make this the perfect Whisky to enjoy with fish and shellfish, like some moreish Scottish langoustines. It’s also fantastic with a good French brie. Whisky and cheese is a classic combination.

For The Lasanta, I would take inspiration from its sherry cask finish and enjoy it with some spiced Spanish cured meats, or go for all-out indulgence and pair it with a rich sticky toffee pudding. 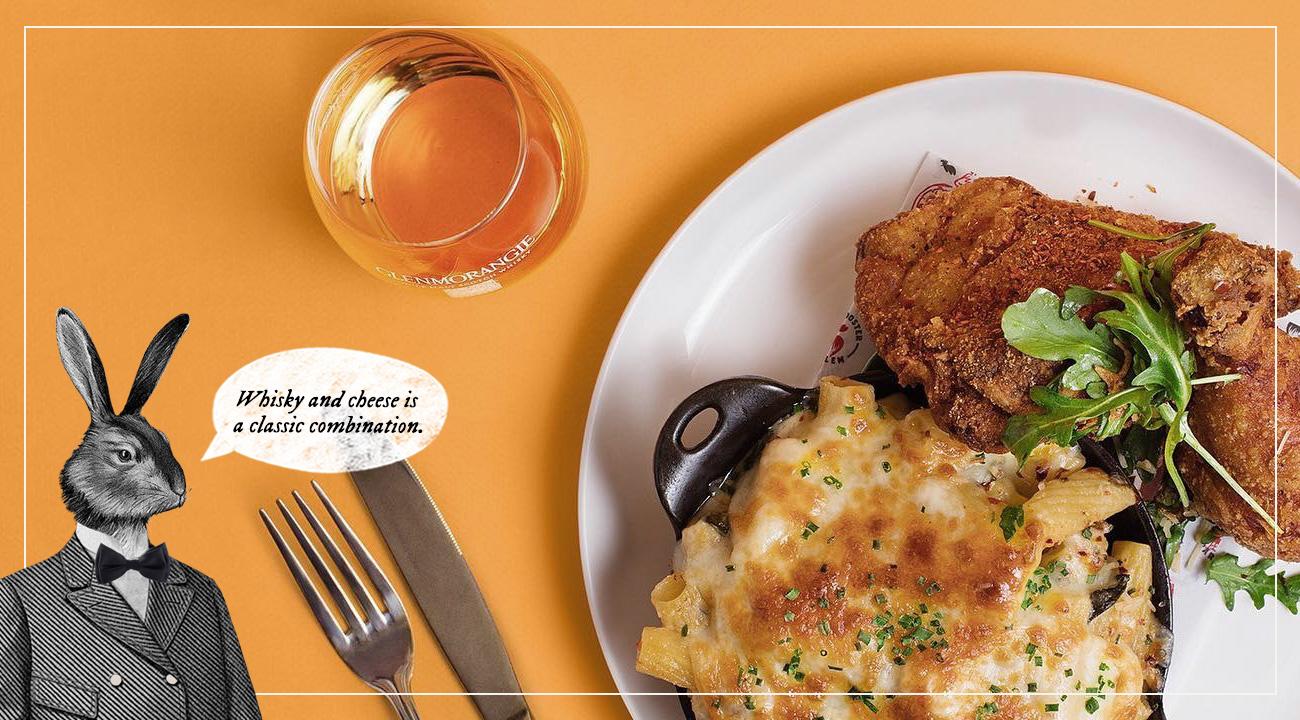 Dr. Lumsden: We always have plenty of exciting projects up our sleeves, but I’m afraid you’ll have to wait until they appear on the shelf!
Read more about:
Published Sep 23rd 2019
By Jackie Gutierrez-Jones