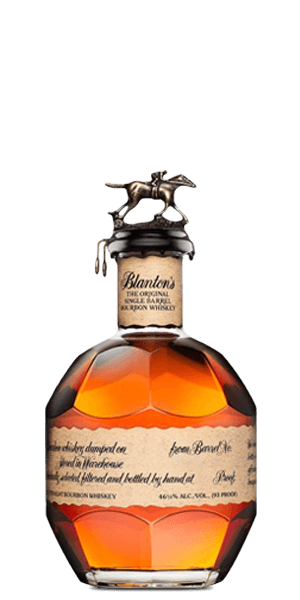 Colonel Albert B. Blanton was born into one of the first families of Bourbon back in 1881. At the age of sixteen, he started work in the distillery as an office boy and fast became a leading pioneer in the development of Bourbon. Today, Blanton’s is a division of Sazerac Company — one of the largest privately held liquor companies in the world. They distill it in their Buffalo Trace Distillery, but make no mistake, Blanton’s is a unique, stand-alone brand with a focus on nothing but greatness.

Blanton's Bourbons are something special. Just look at the bottle! Have you ever seen such a unique shape in an American Whiskey? And the cast metal stopper of a Kentucky Thoroughbred horse just adds to the mystique. This Blanton is just what the name says it is, the original Single Barrel they started doing it back in 1984, and they haven’t changed anything since. Done in the same manner as Colonel Albert B. Blanton did his private reserve almost a hundred years ago, part of the barrels are from the center part of Warehouse H, where Blanton believed were the optimal conditions for Bourbon ageing. A classic Bourbon that still holds standards yay high for others in the game.

Blanton's Original Single Barrel was the winner of the Flaviar Community Award 2017 in its respective category!

The Flavor Spiral™ shows the most common flavors that you'll taste in Blanton's Original Single Barrel (700ml) and gives you a chance to have a taste of it before actually tasting it.

Appearance / Color
Red amber color
Nose / Aroma
A creamy vanilla nose features hints of orange peel, nutmeg, caramel, and light spices.
Flavor / Taste / Palate
A soft but rich flavor of burnt sugar, cloves in harmony with strong caramel and corn sensations.
Finish
A strong and lasting finish that brings back nutmeg and corn above everything else.

Paul, Dec 25, 2020
Fantastic. Nutty finish when neat which is really exposed when you drop a spoon of water or let a single cube fully melt. Don’t waste it in a cocktail. It’s the best all around “daily” bottle.

JK, Dec 7, 2020
LOVE THIS ONE! THE ONLY PROBLEM IS FINDING IT. THANKS TO A GOOD FRIEND WHO LIVES NEAR THE DISTILLERY I WAS ABLE TO ADD A FEW TO MY COLLECTION. SMOOTH AND HAS ALL THE RIGHT FLAVORS WITHOUT BITTERS!
Load more reviews