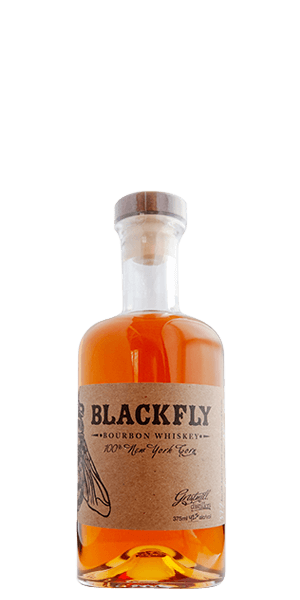 Buyer Protection
Money-back guarantee if things go wrong.
If you ever visit the Adirondacks, you’ll see why their flies have their own Bourbon.

Founded in 2013 by Keith and Steph Hadik, Black Fly is a product of Gristmill distillery. Nestled in the Adirondack mountains in upstate New York, the rustic facility sources provincial ingredients for their handcrafted Whiskeys.

Gristmill is a true Upstate New Yorker, embracing its rich agricultural heritage, and fresh mountain air. They advocate the importance of using local ingredients, and source their water from a spring within a few paces of their facility. Their corn is grown by Adirondack Organic Grains in nearby Essex.

“Black flies are synonymous with the Adirondacks, as anyone spending time here can tell you. Like us, they’re active in the mountains and seek out adventurers making their way through the High Peaks. We grudgingly co-exist with these small but fierce locals (and find that our Black Fly Bourbon Whiskey is just the thing to take the edge off their bite).”

The Flavor Spiral™ shows the most common flavors that you'll taste in Black Fly Bourbon and gives you a chance to have a taste of it before actually tasting it.

Flavor / Taste / Palate
Hints of oak and sap mingle with a touch of corn, a little spice.

Finish
Clean, with a hint of oak.