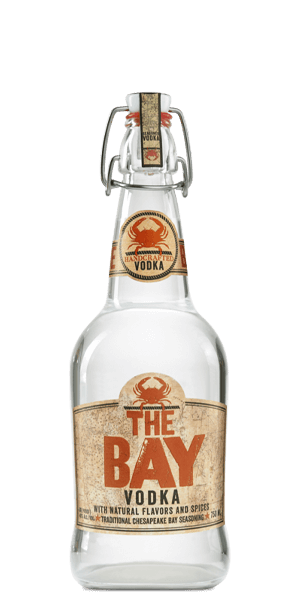 A seasoned Vodka with savory notes of the sea for next-level cocktail making.

Philadelphia Distilling was the first craft distiller in Pennsylvania since Prohibition. In 2005 when the founders applied for their license, the Pennsylvania Liquor Control Board officials had to make one up because an official form did not yet exist. Their first product was the patriotically-named Bluecoat Gin. And it was a success. Fifteen years later they have expanded, added new stills, and developed a range of quality Gins, Vodka, and even Absinth.

The Bay Seasoned Vodka was launched in 2013. It is named after the famous Chesapeake Bay that connects Virginia, Pennsylvania, Maryland, and Washington DC — and is famous for crab-cakes and "Old Bay" seasoning. The Bay Seasoned Vodka infuses some of those local botanicals into the Spirit for a Vodka that brings the flavor of the region along with it.

The base Spirit is grain-based and the botanical infusions include celery seed, black and red pepper, nutmeg, cardamom, and sea salt. The result is a savory Vodka that is just about perfect for making a Bloody Mary, Dirty Vodka Martini, or other savory cocktail of your choosing.

The Flavor Spiral™ shows the most common flavors that you'll taste in The Bay Seasoned Vodka and gives you a chance to have a taste of it before actually tasting it.

Nose / Aroma / Smell
The aroma is salty and savory with a peppery kick.

Flavor / Taste / Palate
The flavor profile takes like the sea with a melange of flavors that scream to be served with clams and soft-shell crab — from peppery and salty notes to resinous and smoky notes.

Finish
The finish lingers in the back palate for a long time.