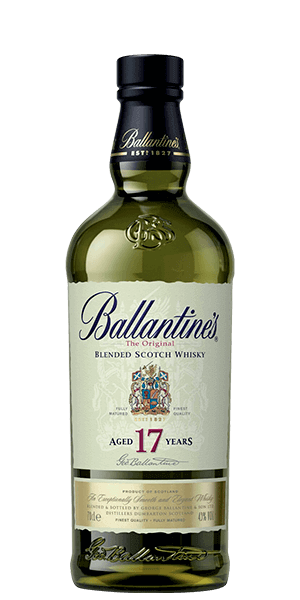 Ballantine's is one of the most well-known Blended Scotch Whisky brands in the World. It was established by George Ballatine in 1827 in Edinburgh. It started out as a small grocery store, and slowly became the World's second highest selling Scotch Whisky, right after Johnny Walker. The brand’s belief in ‘Staying True’ has ensured that the Whisky’s quality has never wavered and that more people across the World enjoy it today than ever before.

This is simply one of the best blended Scotch Whiskies in the World! In 2011 it swept aside all single malt rivals to take the prestigious Jim Murray’s Whisky Bible Award. That's saying a lot. The longer maturation gives it extra depth of flavor, from subtle smokiness to its fruitiness and velvety texture.

The Flavor Spiral™ shows the most common flavors that you'll taste in Ballantines 17 Year Old and gives you a chance to have a taste of it before actually tasting it.

Raoul, Oct 31, 2019
Has a sharp finish. First I thought it was me but friends tasted it too. It was the underachiever of a tasting event

guest, Mar 8, 2019
I got some chocolate, citrus, and a little smoke on the palate. Different from my go to scotch flavor profile, but it’s an enjoyable and interesting whisky.

Daniel, Jan 11, 2019
Smooth beyond the 17 years without being overpowered by wood.

guest, Feb 5, 2017
Beautiful nose, sweet fresh, definitely citrus vanilla chocolate fudge. You can smell the muturation over the years. Palate has the same quality and matches the nose on citrus vanilla and fudge/karamel. It's very smooth, differs totally from a young single malt, but the depth, complexity and smooth aftertaste makes this worth the money. Winner! It has some similarities to Old Pulteney 12, never had the OP 17, it's high on my wishlist.