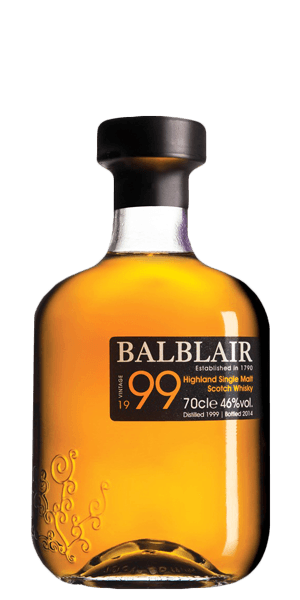 Balblair is situated just to the north of Glenmorangie, near the village of Edderton in Ross-shire. It is one of the oldest Scottish distilleries, dating back to 1790, but there are records of distilleries on the site as far back as 1749. Balblair’s Whiskies are famous for releasing only vintage Highland single-malt Whiskies, once distillery manager John MacDonald decides they have reached optimum maturation.

This is Balblair’s second release of the much anticipated 1999 Vintage, which replaces the 1997 vintage in their portfolio. Aged for 15 years in 2nd fill Bourbon casks, and first-fill Sherry butts. While the 1st edition was available for Travel Retail only, this version is distributed more liberally. Grab on(e) and don’t let go.

The Flavor Spiral™ shows the most common flavors that you'll taste in Balblair Vintage 1999 2nd Edition and gives you a chance to have a taste of it before actually tasting it.

Allen, Aug 5, 2018
This may be the perfect whiskey. A hint of sweet fruit, a hint of leather, a hint of pepper, a hint of oak--complex, but goes down easy. An experience start to finish.