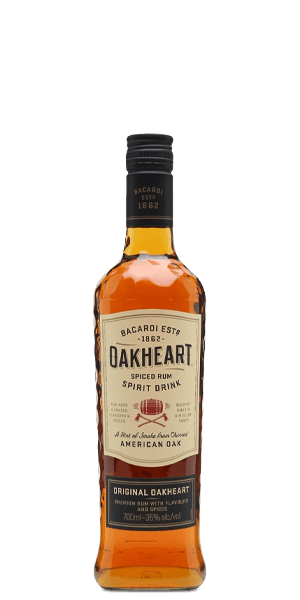 The Marriage of Vanilla and Spice.

One can’t talk about Bacardi Rum without mentioning the Bacardi family. They first started producing Rum in Cuba in 1862. In the years that followed since, they have faced everything from revolution to wild parties in Havana during the American Prohibition.

When Emilio Bacardí Moreau refused to support Spanish government and fought for the independence of Cuba, he was imprisoned and exiled. But when he later returned to Cuba, he became the first freely-elected mayor of Santiago de Cuba.

In the 1960s, Cuban revolution led to Bacardis leaving Cuba. Family members moved to the United States and distillery settled in the island of Puerto Rico.

Under the protection of the bat, which is a symbol of good fortune, they started rebuilding what they left behind in Cuba. Today the seventh generation of Bacardi family is pursuing perfection in the Rum-making.

Bacardi Oakheart is their only spiced Rum and it’s well worth your attention. Aged in charred oak barrels and topped with a secret blend of spices, it’s a sweet & spicy combination that will blow you away in a simple Oak & Coke (we’ve seen it happen), but will also work good neat.

The Flavor Spiral™ shows the most common flavors that you'll taste in Bacardi Oakheart Spiced Rum and gives you a chance to have a taste of it before actually tasting it.

Finish
Lingering and soft with vanilla and cinnamon aftertaste.

Jeannine, Nov 30, 2020
I like the extra vanilla flavor this has over other Spiced rums

Michael, Jun 18, 2020
Hints of oak made it taste like a combination of bourbon and rum

Anthony, May 18, 2020
Good spiced rum, a step above the normal bacardi, and a good value

Iraklis, Aug 19, 2019
A perfect companion during a summer night around a fire.

Shawn, Nov 12, 2017
loved the oak smokey taste. It makes for a extreme smoothe rum and coke. Introduced it to a number of friends to have it become their drink of choice.

David, Oct 16, 2017
I really enjoy the vanilla notes but I’d still rather have Captain Morgan

Mikail, Jul 25, 2015
A lot better than I was expecting. An impressive spiced rum from Bacardi.