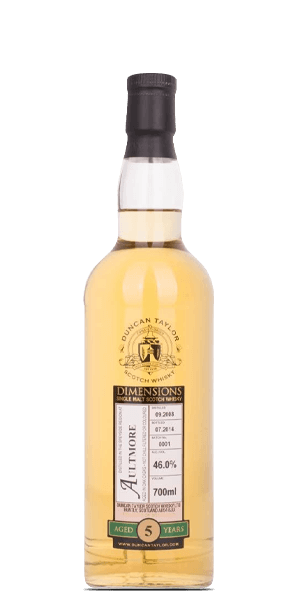 Duncan Taylor & Co. was founded in 1938 as a cask broker — an agent for competing distilleries and blended Scotch companies. Soon, they started showing up at distilleries with their own casks to have them filled on site. All the while they built up one of the largest privately-held collections of rare casks. In 2001, experienced industry veteran Euan Shand purchased the company and expanded into a series of new brands and blends to complement their rare cask business with fourteen Single Malts and blended Scotches, one Rum, and one Gin.

The year 1895 was a highlight year for Whisky in the middle of Victorian England. It was also the year that Alexander Edward founded the Aultmore Distillery in the town of Keith, Banffshire, in the Highlands near the mouth of the River Deveron. It was built from the start to provide Single Malt Spirits to the big blending houses — which it still does today. The distillery is famous for their apples and pears flavor profile.

Aultmore 5 Year Old 2008 is a part of the Dimensions series from Duncan Taylor. They got their hands on some orphan casks of Single Malt that was distilled in September 2008 and bottled them in July 2014 — so it’s REALLY just two months shy of six years-old (refill hogsheads). And there are a few of those bottles left bottled at a perfect 46% ABV.

The Flavor Spiral™ shows the most common flavors that you'll taste in Aultmore 5 Year Old 2008 - Dimensions (Duncan Taylor) and gives you a chance to have a taste of it before actually tasting it.

Nose / Aroma / Smell
The nose is like an apple cobbler and lemon curd in a bottle.

Flavor / Taste / Palate
The flavor profile is classic Aultmore with ripe pear, tart apple, a dash of citrus zest, and a creamy custard.

Finish
The finish is medium length, crisp, and lightly sweet.