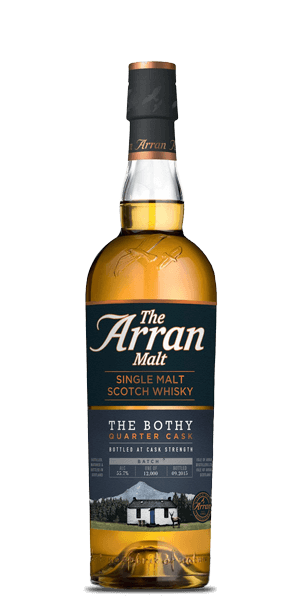 A delicate, bright, and tangy Arran Single Malt aged in ex-Bourbon and finished in quarter casks.

Harold Currie was a senior director Chivas. He somehow got it in his head that he could do Whisky better. Harold was also a fan of the Isle of Arran — an island in the middle of the Firth of Clyde which had at one time been home to at least fifty illegal distilleries. So he saved his pennies, took on a few investors, and broke ground on his dream in 1994. But two golden eagles built a nest on site and construction had to be stopped until the chicks were fully fledged. Solid move, right? Today, they produce a tidy range of Single Malt offerings, limited editions, special blends, and a Scottish cream Liqueur. Turns out good old Harold COULD do it better.

Back when the Isle of Arran was a bootlegger’s paradise, the Whisky was smuggled back to shore in small, quarter-sized casks. This was for purely practical purposes because the small rowboats would tip over with bigger barrels. Smaller casks are more expensive by volume, but deliver more flavor quicker so the trade-off was worth it.

The Arran Distillery started a series of special limited releases called “The Bothy” to carry on the tradition. The Arran Quarter Cask Batch #3 is a fine “Bothy” Single Malt that has been aged a full seven years in ex-Bourbon casks, followed by eighteen months of finishing in new, quarter-casks. And a tasty tradition it is too at 53.2% ABV with no colorings and no chill-filtration.

Smartass corner:
A “bothy” is a local slang expression that refers to a small hut or home. The small quarter-casks used by smugglers picked up the nickname.

The Flavor Spiral™ shows the most common flavors that you'll taste in The Arran Quarter Cask #3 and gives you a chance to have a taste of it before actually tasting it.

Nose / Aroma / Smell
The fragrance is warm and bright with a tang of Meyer lemon and plenty of toasted granola notes, cinnamon, and wood.

Finish
The finish is both fresh and long with wood spice and more lemon zest.