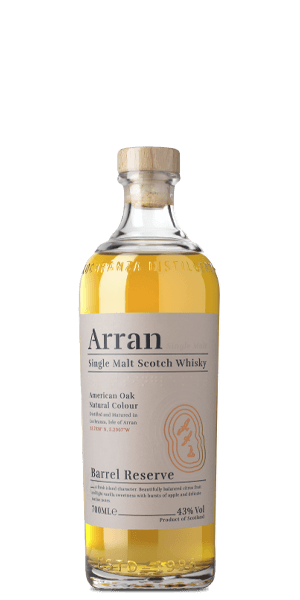 Arran Single Malt set out to create a new Single Malt worthy of your daily dram, and they have accomplished that task.

The team at Arran decided to create a new core Single Malt that could take a place of honor as your daily dram. Arran Barrel Reserve Scotch Whisky is the result of that effort. It is the signature Single Malt Spirit that Arran is known for. It’s been aged exclusively in ex-Bourbon casks. And it is delivered at 43% ABV. It is perfectly lovely in cocktails. But please… do yourself a favor and take the first dram neat.

The Flavor Spiral™ shows the most common flavors that you'll taste in Arran Barrel Reserve Scotch Whisky and gives you a chance to have a taste of it before actually tasting it.

Nose / Aroma / Smell
On the nose you will find notes of lemon curd, shortbread biscuits, fresh grain, and autumn fruits — apple and pear.

Finish
The finish is medium-length and alive with notes of toasted oak and orchard fruits.