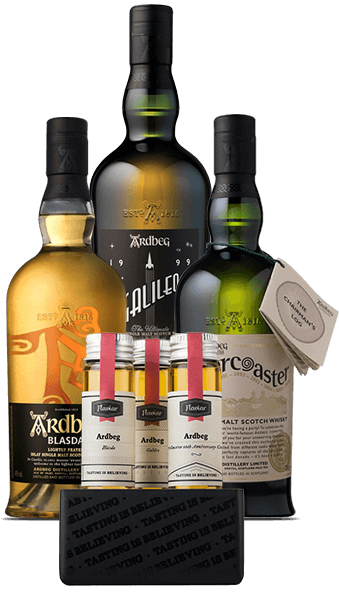 Ardbeg Blasda Limited Release: Lightly peated, for your pleasure (an Ardbeg rarity, to be sure). Fun fact: Blasda is Gaelic for "sweet & delicious.”

Ardbeg Galileo: Distilled in 1999 and aged in both ex-Marsala and ex-Bourbon barrels, this is a fine example of the true Islay spirit. It's famous for its heavily peated expressions.

Ardbeg Rollercoaster Exclusive 10th Anniversary Committee Edition: Bottled in 2010 to commemorate the 10th anniversary of the Ardbeg Committee back in 2010, it was vatted from casks dating between 1997 and 2006. This is a fantastic bottle that doesn’t hold back.

The Flavor Spiral™ shows the most common flavors that you'll taste in Vault Selection XXXIII Ardbeg's Trio and gives you a chance to have a taste of it before actually tasting it.