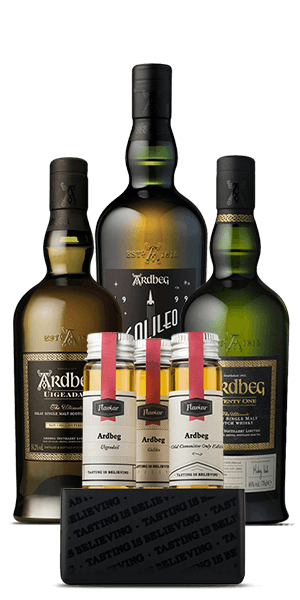 The Ardbeg distillery is arguably one of the greatest distilleries on Earth. It produces one of the most peated Scotch Whiskies. The distillery was founded in the early 18th century on the south coast of the isle of Islay, Argyll and Bute, Scotland, and is now owned by Louis Vuitton Moët Hennessy.

Ardbeg Uigeadail
Ardbeg Uigeadail is one of their finest and most-loved expressions. This elusive Scotch Whisky was named the 2009 Whisky of The Year by Jim Murray's Whisky Bible.

Ardbeg Galileo
Distilled in 1999 and aged in both ex-Marsala and ex-Bourbon barrels, this is a fine example of the true Islay spirit. It's famous for its heavily peated expressions.

Ardbeg 21 Year Old Committee Only Edition 2016
A rare glimpse into Ardbeg's past. Distilled in stills that now stand before the entrance of the distillery, this expression was highly anticipated by Ardbeg fans.

The Flavor Spiral™ shows the most common flavors that you'll taste in Vault Selection XVIII. Ardbeg and gives you a chance to have a taste of it before actually tasting it.