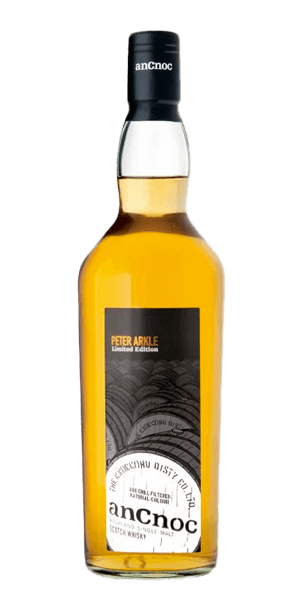 In the beginning of the 19th century an aspiring man named John Morrison found a patch of land rich not only with barley and pure, clear Highland water but also surrounded with bogs of shallow and dry peat. Just in that time tracks were laid for the railway bounded for the most Northern parts of Scotland. Mr. Morrison grasped this opportunity and bought the Knock Estate from the Duke of Fife, giving birth to the Knockdhu Distillery 1894.

The Single Malt created by the "Men of Knock" had a peaty heart in the start due to the peat-fired kilns drying the grains of the cherished barley. With time the methods of production changed, making anCnoc Whisky renowned for a more peat-free style of Whisky.

First, AnCnoc is pronounced "a-nock," named after the local village. The Peter Arkle Cask series is a limited edition collaboration. Ankle is a contemporary Scottish illustrator. Each release has labeling designed in collaboration with the artist and a specially selected filling by the AnCnoc Whisky Master. Cask No. 2 is the second in the series.

For this edition, one half of the classic AnCnoc Single-Malt is aged in Spanish Sherry butts, the other half in American ex-Bourbon barrels. You might notice that there is no age stamp on the label. That’s because they have mixed and match older and younger Spirits to their target flavor profile, but all of it is pure AnCnoc — a lighter, clean-drinking Whisky with a contemporary flair.


Smartass Corner:
Peter Arkle is a reknowned Scottish illustrator based in New York who has worked with some of the worlds biggest brands (Guinness, Nike, and Starbucks are just a few!) He has developed an exclusive range of limited edition designs for anCnoc.

The Flavor Spiral™ shows the most common flavors that you'll taste in anCnoc Peter Arkle 2nd Edition and gives you a chance to have a taste of it before actually tasting it.