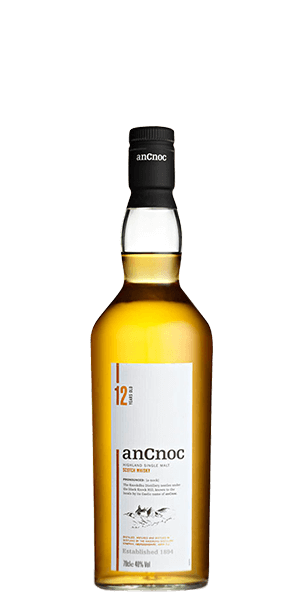 A “go-to” Highlander with sublime, complex palate and amazing aromatics.

John Morrison found a patch of land rich with barley, Highland spring water, and shallow bogs of dry peat. He smartly grasped the opportunity and bought the Knock Estate from the Duke of Fife, giving birth to the Knockdhu distillery  in 1894. With time the methods of production have changed, but their dedication to quality has not. Today they produce a wide range of Single Malts of various styles, ages, and special editions.

anCnoc 12 year old is the core of their Single Malt range, and it is one of our Highland favorites. It is officially located in Aberdeenshire, but it is in the top end. If the distillery were located five miles to the west it would qualify as a Speyside so it is not surprising that this Single Malt shares many of the light, fruit-forward characteristics of the region. And since the Whisky is aged in refill ex-Bourbon and ex-Sherry casks, the wood influence is subtle and refined, revealing a cleaner — we might even say more authentic spirit.

Smartass Corner:
AnCnoc — pronounced “a-nock” — is named after the local village of Knock in Banffshire. Previously, this Single Malt was named “Knockdhu” after it’s distillery. But there was a lot of confusion with the nearby and similarly-named “Knockando” distillery, so it was rebranded.

The Flavor Spiral™ shows the most common flavors that you'll taste in anCnoc 12 Year Old and gives you a chance to have a taste of it before actually tasting it.

Aaron, Oct 24, 2020
Aroma was pretty good - red berries, touch of cinnamon, a lot of sweet apple. Taste really, really lost me though - a ton of apple again, an odd muscadine/white wine like flavor, and then an oddly salty finish. Didn't care for this at all.

Kris, Sep 24, 2020
Apple, honey and dark jam on the nose with a warm first sip. Spicy on the way down but a very good dram overall.

Jasson, Jul 3, 2020
I like the front-loaded spice and how it remains light on the tongue throughout. Finish is long and sweet. Very tasty dram.

Angel, May 22, 2020
A rich marmalade with a wisp of smoke. Wood and honey coat the palate finishing with a light fruit note. A Scotch worth the time and the appropriate cost. Perhaps another staple in my cupboard.

Jeremy, Apr 26, 2020
Enjoyed this. Spicy, salty oak throughout with a small sweet finish. Quite simple and not too complex. Almost has an Irish whiskey profile and oddly, I got Tequila on the nose...

Joseph, Jul 24, 2019
I enjoyed my 1st glass. it has a nice malty/barley flavor. Adding a few drops of water definitely changed the flavor a bit. I liked it both ways.

Michael, Jun 28, 2019
Very much prefer this neat or a drop of water, totally not on the rocks!

Jack, Dec 16, 2018
Not really a scotch guy but really trying to give it a shot. AnCnoc is growing on me, writing this after my second glass and adding a single ice cube. Hoping to change my rating down the road.

JEFFREY, Apr 11, 2016
The nose has hints of flowers and vanilla. Taste is sweet with citrus and caramel notes. The finish is a medium and fruity.
Load more reviews