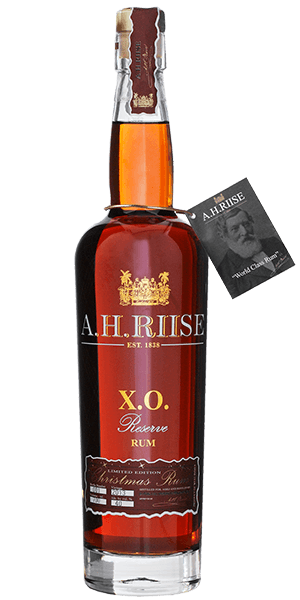 Made for Scandinavian Winter, it warms you on the inside.

Danish Navy Rum has been designed and produced in celebration of a significant Danish entrepreneur, pharmacist and councilor Albert Heinrich Riise, who lived and worked in the former Danish West Indian Islands (now U.S. Virgin Islands) from 1838 to 1878. Riise created the Royal Navy Rum and delivered it to the navy vessels at the port of Charlotte Amalie in the West Indies during his years there to give the Royal Navy sailors a punch of confidence.

A. H. Riise Christmas Rum 2013  is an exquisite rum from the Danish West Indies (US. Virgins Islands). It is hand blended by several Rum distillates that are up to 20 years old. The recipe? A. H. Riise X.O. Reserve, which has received a further cask finish in old Pedro Ximenez Sherry casks.

The production of this Rum is strictly limited. Each cask is specially selected by the Master Distiller and bottled individually and every bottle is additionally labeled with cask number as well as bottling date.

The Flavor Spiral™ shows the most common flavors that you'll taste in A.H. Riise XO Christmas Rum 2013 and gives you a chance to have a taste of it before actually tasting it.

Smell / Nose / Aroma
Rich and powerful notes of Christmas spices such as cloves, cinnamon and orange